LOTUS AND MV AGUSTA WAS NOT A MISTAKE. 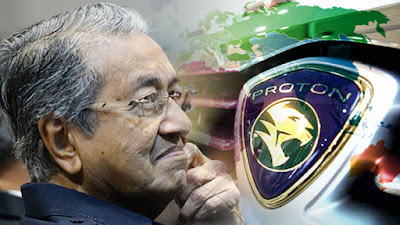 
I read with interest Mohd Khairil Azman posting in FMT at HERE that had gone viral and I made references in this article to his 3 questions but first let us go back to the fundamental of the national car project.

It is interesting to observe how Malaysia national car projects had evolved from first the Perusahaan Otomobil Nasional Berhad, PROTON in the early 1980s and then Perusahaan Otomobil Kedua Berhad (Perodua) in 1992. Both national car projects were mandated to achieve 1 clear objective; to be able to design, develop and produce our own car as part of our industrialization program to achieve the vision 2020.

Proton's journey has always been in that direction, Perodua which was also Tun Mahathir's project that was approved by cabinet in 1992 was given the same mandate as Proton. This was clearly stated in Tun Mahathir's speech as the Prime Minister then, when he launched Perodua manufacturing plant in Rawang; 2 years after the cabinet approves the 2nd national car project. Tun Mahathir's speech can be read at HERE.

With both Proton and Perodua non-competing in different category, there were sufficient sales volume for both companies to slowly acquire technology and engineering capability to achieve the government's vision and objective. With the proceeds received from those sales, Proton reinvested by acquiring technology through Lotus and MV Augusta and build its RM1.8 billion Tanjung Malim plant.

Proton acquired Lotus in October 1996, a year before we were hit with the worst recession in 1997 which halted whatever plan Proton had for Lotus. When the economy recovers, Lotus engineering has been part of Proton cars ride & handling but not many had driven the lotus to actually feel it in Proton. The Lotus engineering too is the catalyst behind the new engine nicknamed Volcano that was recently launched in January this year. (More information at HERE). Lotus was acquired for its engineering capabilities as well as support and it has contributed to the development of Proton cars. Whether Proton did have a turn around plan for Lotus cars itself remain unknown when the architect of its acquisition, Tan Sri Yahya Ahmad died of helicopter crash (more information at HERE).

The idea for MV Augusta acquisition was to use the small light weight MV Augusta engine in Proton small car for segment-A. This concept that was well thought by Tun Mahathir way in the past, is now being used by Volkswagen. VW showcased its XL Sport at the Paris motor show, powered by a Ducati twin engine. BMW did the same concept with the MINI and BMW i3 and i8. In October 2014, AMG and Mercedes Benz bought 25% stake in MV Augusta to have access to a new range of high-revving, efficient, lightweight three- and four-cylinder motors. (Please read HERE).

The misadventure for Proton was to lose the MV Augusta. After failing twice in Segment A with the Proton Tiara and Proton Savvy, Proton would have returned with an in-house small car running on MV Augusta engine. Now, Proton still do not have any vehicle in this segment.

The acquisition of Lotus and MV Augusta was in tandem with the government's mandate then for technology transfer and engineering capabilities.

Since then, Proton had designed and produced in-house various other models such as Proton Saga, Persona, Gen 2 and Proton had build its own engine. Proton dealers did suffer badly having to sell some of those problematic and cold model variance such as Proton Tiara, Proton Juara, Proton Arena to say the least but this is a story for another blog.

Not to forget Proton have also developed its eco-system both downstream and upstream.

The government's policy for the two national car maker during inception was very focused and objective oriented. It was all about a long term technology transfer and engineering capability in two different market segment.

When Tun Mahathir Mohamad resigns as the Prime Minister in 2003, the direction for both the national car changes. From the two different car size segment (Segment A and Segment B), Perodua began re-badging and launched in 2005 the Perodua MYVi that encroached into Proton's market segment. Perodua remains an assembler with very minimal technology transfer or engineering capability to design and build its own car (What happen to the original policy on technology transfer, R&D and engineering capability?).

With Perodua MYVi in Proton's Segment B of the market, the sales volume was split with Proton. With lesser volume, it became harder for Proton to recoup its investment in R&D, and its technology as well as engineering capabilities. Perodua continues to profiteer from assembling cars.

Soon, Proton will be launching two more in-house design; the new Proton Saga, the new Proton Persona and the first of many series of Suzuki rebadge ala Perodua. Proton would have also launched its EV if its request for additional R&D support was extended.

In 2011, Proton received RM200m grant to research and develop Proton hybrid car. The concept was to design and develop a hybrid car that can travel 350km on a RM20 full tank co-powered by electric and it would cost less than RM100,000 per car. That was the concept and with the RM200m grant, this was almost made possible. A conversation with people in Proton reveals that the car which was under R&D, was able to drive 300km but the scale of production would price it at RM150,000. There were a few technical issues that needed to be resolved too. Proton requested for further funding for R&D to improve the distance, resolves those technical issue and to reduce the production cost below RM100,000 but it was declined. Instead, the government invested in TESLA which would cost the public RM400,000 per car.

Proton misadventure is in the change in government direction for the two national car maker. While the government still wants Proton to design and build in-house Proton own car and increase its export volume, the same was not required of Perodua. Proton also became victim to political feud while Perodua continues to be given flexibility and supported even when it has drifter so far away from the initial vision for its establishment.

For the record, although Tun Mahathir was made the Advisor for Proton since 2003, he was never consulted nor heard or seek advised but the media and politicians continue to pick and points finger to the one man who wants nothing else for Proton but to see its success. If Tun Mahathir really had the authority to be made accountable as the Advisor, Tengku Mahaleel would not have been removed.

To achieve the national car objective to design and build our own vehicles would require the Prime Minister to have the same passion and to drive the national car project, and the government institution to support it. Much less support and funding is required to be an assembler.

Please also read: Should the government bail out Proton?
and Khazanah Nasional to be blamed for Proton downfall.