This month also marked the fifth month since I joined the Bootcamp training... Four Months of ACE since November 2009, Five months of consistent blog-journal entry of every session and 5 months of pure punctuality... and is still going strong!! VERY STRONG!!! .. except for the knee.

We had only the senior trainers with us today, namely Sarge Simran (ACE in training too!!), Corporal Faizal Ariff and Corporal Jason Moriarty. There were no Lans Corporals....

There were 6 AWOL TODAY........ the typical super seniors Kenny Smith, Scott Verrett, Marcos Salama, Rachel Sebastian, and the less senior Virmala and Hana Hashim. The seniors knew how we appreciate the extra Grunts and squat pulses.. so again, thank you for the extra 'workout'.

We should get at least 60 grunts or 6 sets of 30 seconds squat pulses............ but surprisingly we did not! (shocked with mouth wide open). Maybe it is the last session and Sarge Simran wanted to give us some 'break'?

After the roll-call by Corporal Faizal and the routine warming up, we were divided into our respective rank.. the Delta, Seals and Rangers... Sarge Simran took us the Delta first, Corporal Faizal took the Seals and Corporal Jason with the Rangers. There are three circuits prepared for every rank. 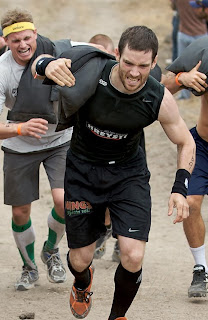 With Sarge Simran, each of us Deltas had to bear-hugged Sandra Baglog aka sandbag and run.......... for 20 minutes. It was a good start, in fact I was ready and expecting a mega strenuous and difficult session today. While running along Jalan Parliament, I incidentally tripped on a road-grill (???) and 'Tergolek'.. fell hard on my ankle that my head-hugging tag heuer spectacle flew off my head from the impact.

Err.. determine to complete this last session... or rather 'control macho', I continued the run... While running, Sarge Simran instructed to change Sandra's position ala KamaSutra.... from Bear-hugging Sandra, Sandra on top (arm stretch above the head), on the shoulder, Sandra lift with arm straight but this time, Sandra did not go under between the legs. All those positions were alternated while running... Slow and steady, we lasted the whole 20 minutes although some recruits went fast and crazy... especially the SSJ Chun Chiakie. Despite the knee & ankle pain, I luuuuurve the run with Sandra but I was cover with Sandra's sweat aka Sands. 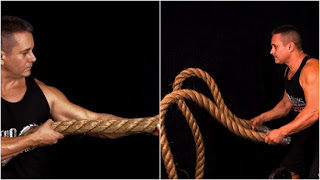 We had the BOOM SHAKE SHAKE THE ROPE circuit after the run..... partnering with Chun SSJ against Hafiz Omar and Irwan Anuar, we stood at one rope-end and Hafiz Omar and Irwan at the other end approximately 15 metres apart. Starting with me and Hafiz, holding the mother of rope that is as big as my arm, we had to shake-the-rope creating as big a wave with the mother of rope while Chun SSJ that was behind me, and Irwan Anuar behind Hafiz Omar had to performed squat with Sandra... yesss.. still with Sandra. 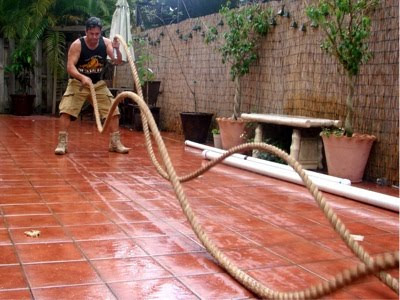 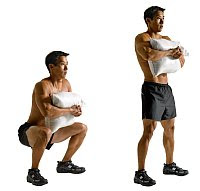 While squatting down, Sandra is held ala bear-hug and when squatting up, sandra is carried up with both arm stretch straight above the head. On TABATA, we rotate between shaking the rope and squatting Sandra.

The body position to shake the rope was changed from standing to kneeling. The form to hold the rope was also change from the hand-shake form to karate-fist-form.

So far, the circuit was ....... excellent!! Shaking the rope toned the arm and good for the core muscle as well as abdomen. 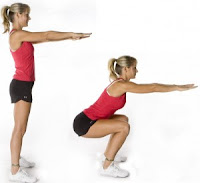 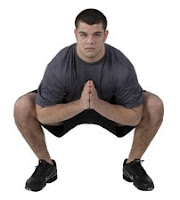 We then went on to Corporal Faizal Ariff with his signature TABATA... also my favourite. On a TABATA (20 seconds workout, 10 seconds break and so forth for a fix period), we did Four Sets of SUMO Squat. I observed my squat 'form' carefully and was able to complete it with heart 'TERBAKAR' on TABATA.


We should rename the TABATA workout with TERBAKAR (on 'Fire' in Malay Language) which is true to the the meaning. On the same TABATA, we did the KING KONG PUSH UP for a similar repetition of 4 sets. After a good bench-pressing at the gym yesterday, the King Kong Push up was abit excruciating but I luurve it!!! Maybe soon will have the chest of an APE and embarrass the ladies on push-up bra haa.

Having performed the King Kong Push-up on the toes (which is expected of the Deltas), the ankle-pain from the 'Fall' worsen and a sudden sharp pain is felt but I continued to gave the 100% commitment to ACE February with Honor.

However, I took the 'option' workout on the third set on TABATA. I could not perform the bloddy strenuous MOUNTAIN CLIMBERS and did the truster instead but the Trusters aggravated the ankle pain and I must have compromised the form done when the pain was then felt on the right knee (the old injured knee).

Mountain climbers are a great combination of strength exercise and cardiovascular exercise. They simultaneously target glutes, hamstrings, quads, chest, and abdominals, and will sent your heart pumping at heart-quake tsunami richter 7.5 scale! 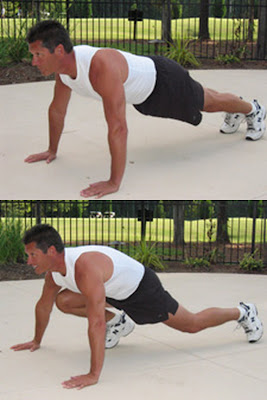 End Position and repeat with the other leg
Begin in a push-up position. Jump one leg forward into a low lunge position with both arm glued to the ground. Alternate to the other leg. The trick is to do these continually, back and forth, back and forth.

After completing Corporal Faizal's TABATA, the Delta moved on to Corporal Jason.

Corporal Jason's circuit divided the Delta in two teams; A and B. Team A and Team B were line-up facing each other at 30 meters distance away. An orange cone was placed half way between Team A and Team B to mark the 15 meter distance.

Team A had to Bear Walks 15 meters to the Orange Cone towards Team B. Bear Walks worked out the arms, back, chest and lower body. 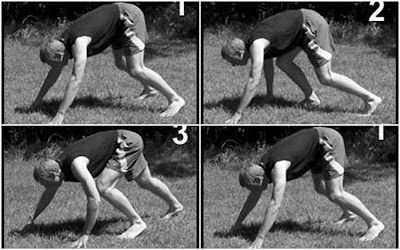 Once we reached on Bear Walks at the orange cone,, we must immediately performed 10 repetitions of 'Clapping Push up'. Then reverse-bear walk back to start position and continue the same circuit for a total of 4 sets. The arm, back, chest was burning on fire.... the constant contraction of the muscles was so good it still twitches even now... (note this is one of the symptoms of dehydration).

Now we know why we did not get the GRUNTS and/or SQUAT PULSES today as a punishment for AWOL.... the circuits prepared was already too strenuous and madness that we need all the energy and time to complete it... so much for giving us a break (Stick tongue out).

The Bear Walk aggravated the ankle and knee pain further, I limped to the warming down session with Sarge Simran. At the end of the session.......... that sense of achievement to complete another month of 100% ACE with Honours was a damn good orgasm.


HOOOOOOOOOOOYAAAAAAH!!!!!!!!!!!!
Although February bootcamp session had just ended, there are March, April, May..... and so forth. Bootcamp, training, exercising should be a lifestyle and not a short term measure.

Until next monday, with another Benchmark assessment to be recorded and for the list of FEBRUARY ACE...... STAY TUNE!!