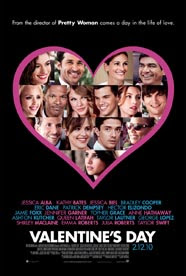 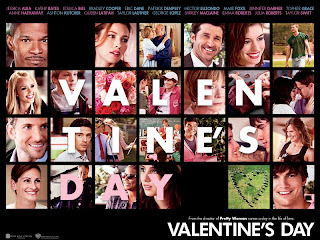 That was all that I knew about the movie when I bought the ticket for a 7pm show, 17 February 2010 at Hall 1, Cathay Cineplexes, Cineleisure, Mutiara Damansara. We arrived abit late at five minutes past seven but in time for the movie.

We took our seat at D8 and a few minutes later, the movie began. The cinema was hot... as in HOT!!! as in NO-AIR CONDITION. I was perspiring and was already moody.... and hungry but I had 'tapau' a large salted pop-corn and a pack of cheezel (my favorite junk food).

Shortly after the 'Loser' proposed to her girlfriend... I fell asleep and woke-up when Julia Robert that played the US Army Captain went home to meet her son. I did wake up a few times but found the movie was abit too dragging... except for that moment when Captain Julia Robert met her son and the time when the son wanted to give Valentine Roses to his teacher which was quite touching.

Maybe the lousy no-aircond cinema spoils the mood but the movie was really boring. The only thing that was enjoyable was the salted popcorn and cheezels that never failed to fail my diet..... if the cinema was cold, at least I could sleep comfortably without sweating.

The movie ended with the three words for Valentines.. LETS GET NAKED... true to the core with the HOT cheap no aircond Cathay Cinema @ Cineleisure.... dissappointing!! ....a waste for RM7 that would be better spend on a Roti Canai + Nescafe tarik....