Its half-way through the February Bootcamp session and two days into the Chinese New Year. A very challenging month for ACE with the CNY holidays but thusfar, we are all still ACE....

Even before the Chinese New year, we were given FOUR "ANG PAWs" today... two 40 seconds Squat Pulses from Farah Ahmad & Scott (the two AWOL) and twice "Time Added" from Chun SSJ (for being greedy wanting to take heavier sandbag from Nawal) and Nyna Mohsen (for not listening to instruction). 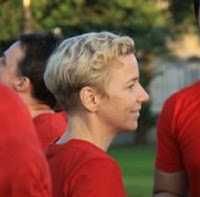 Our platoon was divided into three sections according to their rank, the Delta, Seal and Ranger. The Delta began with Lans Corporal Elin. Lans Corporal Elin had the Delta on TABATA (Twenty Seconds workout, 10 Second break and active again) for 4 minutes on a One-Leg Squat, Tricep Dip, One-Leg Squat and push-up. This TABATA circuit was repeated for 2 sets of 4 minutes. Its either we were all concentrating and fantasizing the killer leg or everybody was still asleep but there was no sound or noise from anyone. I entertained myself looking at other Deltas.... some had a perfect form and some were quite funny especially on the one-leg squat.

The next circuit under LC Elin was the Duck Walk-up Steps.... Here, I was thanking god for my longer leg than some.. some delta with shorter legs had to struggle more to walk up the giant step. Then we did the One Leg Lunges which I avoided and took the option due to the knee problem. I can feel the ass and thigh muscle contracting in pain on every movement. Finally, we did the deep-squat before we were sent to run across the rugby field from Goal post to Goal Post and to Sergeant Simran.

Sergeant Simran awaited us with a line of sandbags. The Delta was split into two group (G1 and G2) and both group were aligned in partner facing each other. I partnered with Nawal. On TABATA-relay; Thirty Second active, 10 second break, Thirty Second active etc,  G1, was given an exercise and the G2 performed a different exercise. The workout was alternated after the 10 second break

The first set of exercises are as follows:

G1: Squat Hold; G2: Squat Pulses (then alternate the exercise with G1 doing Squat pulses and G2 did the Squat Hold, this was repeated for a total of 4 minutes). Legs again!!! My ass was burning in fire and the thigh was crying for mercy but no, we did not cheat....... I wanted a Thunder-thigh!!!

G1: Curtsy Squat; G2 Squat + One-hand Sandbag Swing (then alternate the exercise with G1 performing the Squat + One-hand sandbag Swing  and G2 did the Curtsy Squat, this was repeated for a total of 4 minutes) ...and again Legs!!! Leg workout felt better with the correct form! Most of the time, many recruits compromise the form while in exhaustion. this led to various injuries including the knee. Truthfully, we should observe carefully the form during every exercises... and less whining on listening to the body for injuries (stick tongue out at someone). 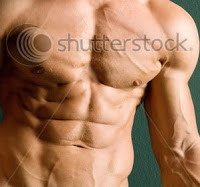 G1: Sandbag Touch D' Shoe; G2 Side Bridges; (then alternate the exercise with G1 performing the Side Bridges and G2 did the sandbag Touches D' Shoe, this was repeated for a total of 4 minutes).. Jacob-8 PACK workout.. no complain.. !! Thank you Sarge... but please give more abs... 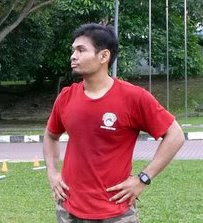 We then moved on to Corporal Faizal Ariff and his Mock Rifles. Every Delta had to carry a Mock Rifle with both hand at chest level (at all time) and run to all six yellow cones. At every yellow cone, we had to lie down facing the ground ala 'drop-dead' and continue sprinting to the next cone. After sprint and 'dead' at all 6 yellow cones, we reached a square made of 4 red cones. With the mock rifle at chest level and both leg together, we had to jump into the square box and back out of the box to sprint back to start position. It all sounded easy until the young Corporal  drop down on the ground and sprinted with us screaming our names at every yellow cones to provoke the maximum effort...... I love it!!!! but then... BEEP BEEP BEEP... alarmed my polar heart rate monitor watch, as my heart beat exceeded the maximum heart rate. Damn...

After three rounds of the 'Drop Dead Sprint' circuit, we were re-born and the exercise was changed. The next set, we had to raise the mock rifle with both arm stretched high up above the head (at all time), and instead of dropping dead at every yellow cone, we performed a one rep lunges (with both arm still stretch up holding the mock rilfe).......... Yaaaa. Leg again!!! Today was all legs... perfect!!!
.
A Kick @ass workout? Today was litreally a Drop-Dead Kick Ass Leg workout!!!! 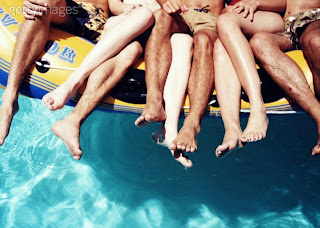