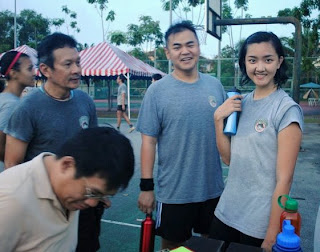 It almost felt like the good old days seeing Amy Ho at the ORIGINAL BOOTCAMP @ Bandar Utama. Last month, Rienna Choo joined us at OBC-BU and the 8 Week Challenge. Amy Ho, Rienna Choo, Natassya Lee, Yushida Yusoff were their clan when we were training together once upon a time. Rose Emini Pahamin was all smiley to greet Amy Ho and so was Dr Malek Aziz, Farhanah Bamadhaj and Nawal Aini Zulkifli. We were also pleased to see Kenix Lim and almost all previous recruits from October back in November session that began on Monday 26 October. Leesa Tan is happily in India? 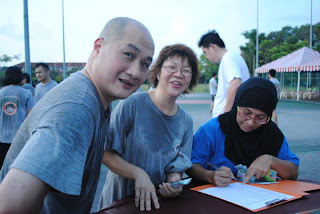 After almost three months of deliberation, Sayf Ismail, an IT Architect and a programmer finally arrived at the OBC-BU soil. His wife Farah Haizum Manap, a NONA finalist and the brother in-law that was supposed to joined us had overslept. Waking up and exercising at 5am will take a bit of getting use to but exercising is a healthy lifestyle that is worth the effort. Indeed, the bootcamp training is becoming a family affair.. there is no better sentiment than to share with your spouse and/or partner similar the passion for healthy and vain. There are more than a dozen married, almost married and married but not official(??) couples at the OBC-BU. However, there are more hot and single hunks and babes available....


Almost a full house with 46 recruits at Alpha platoon, Sarge Dann reminded the otai's and informed the newbies of the rules of engagement while training.. the most important is to always listen to instructions. Sarge Dann then announced the ranking of recruits base on Monday's benchmark assessment. With almost all recruits gaining their Personal Best (PB) timing, the number of Deltas had grow. There are now three ladies in Delta Jean Collins, Ilyanna Aylin Ayob and Kenix Lim. Thumbs up to Jeremy Lim whom made it straight to Delta from Ranger having performed outstandingly well during the benchmark assessment. Congratulation to Adriano Abila and Jenn Collins too for going straight to Delta and well done to James Fong, Joe Liew, Ryan Wong,  for being able to maintained as a Delta.

We are also proud of Yam Chan SiuCheh and Sean Liew whom were upgraded to Seal from Ranger having improved their timing.

Assisted by Corporal Jasper & Corporal Nawal, the platoon was then divided into their respective sections and we took turn in a Grinder-sort workout in 6 stations. Recruits were placed in a file of 6 stations, the first station was abs workout with the Jackknives, second station, the deep squat with mock rifle stretched-up straight above the head, then the military push-ups. The fourth station was the Frogs, fifth station truster with Mock Rifle and the sixth station was the battling ropes. After three sets, those workout were changed. The first set performing military sit-ups, then the shoulder & front press, elbow to shoulder, Mountain Climbers, tiger squat and back to battling ropes.

We repeated each workout for 1 minute before moving-on to the next station without any break. Whilst performing the circuit, someOne incidentally drop the equipment and.... needless to say, 15 Grunts to the whole platoon.  We should always remind each other.. dropping equipments is punishable with 15 Grunts for first time offense, 20 grunts for second offense, 30 Grunts for third and so forth.

Today's workout was fairly mild but a good introduction to various forms of exercise. After a cup of double shot cappuccino with skim milk from coffee bean, now feeling extra mega active....  Did I hear a call for Inferno? 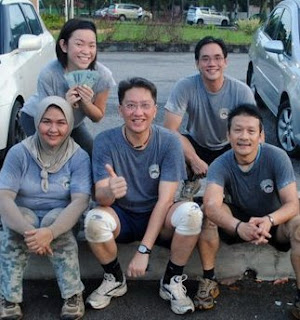