"Armin, a friend of mine, a recruit is coming over to Kuala Lumpur. Can he attend your program at Bandar Utama?", asked Gunny Emily. "Of course he may Gunny", I quickly responded on Skype. Gunny Emily, Original Bootcamp Director of Operation and Global Master Trainer is always ever so polite and humble. She knew OBC-BU welcome any recruits from the OBC network to our training session but she would still ask for permission. Every recruit worldwide is welcome at ORIGINAL BOOTCAMP @ Bandar Utama. That was my pledge to all ORIGINAL BOOTCAMP recruits worldwide. Any recruit from the ORIGINAL BOOTCAMP network can come to OBC-BU anytime for training as long as they are an active recruit in the OBC network. Similarly, all active recruits at OBC-BU too are able to attend training at any OBC sites worldwide if they are traveling overseas. Exercise is a necessity and the momentum must be maintain wherever you are.

Today, we had the pleasure of training with a HELL-WEEK graduate Allen O'Connell, a recruit at the Coogee Beach, Sydney Australia. Emily did not mention he was a Hell Week-er... a super delta sort of speak! Allen O'Connell is also part of the 8 Week Challenge contestant. I was standing beside Allen throughout the training today trying to keep up with his pace.

Sarge Dann, OBC-BU platoon commander greeted Allen O'Connell whom was Sarge Dann's comrade at the recent Hell-Week and introduce Allen to other recruits. The platoon was then separated into two sections, the Delta & Seal with Sarge Dann and the rangers with Corporal Chun & LC Nawal. The Delta and Seal began with a killer-chest-and-arm grinder with twelve repetitions of 8-point push-up, dirty-dog push-ups, Hindu push-ups, Scorpion Push-ups and the Diamond push ups. There are a total 14 types of push-ups at the ORIGINAL BOOTCAMP and we did 5 for the Grinder today. Thank god we did not have to do all 14 killer push-ups in one grinder.

After almost 4 sets of the killer-chest & arm, the Delta & Seal moved to Corporal Chun for leg workout with 12kg Sandbag and the rangers went to Sarge Dann.

Corporal Chun & LC Nawal demonstrated the courses of workout performed with the sandbag on bear-hug hold at all time. The first workout was the stutter-squat, then the Sumo-Squat-to-Calf-Raised followed by the Curtsy-Lunges then the knee-raise-lunges before the frog and the cycle was repeated for more than 4 sets. The Delta had to performed 12 repetitions for every workout whilst the Seal did 10 repetition per workout. The legs were burning and I thought it was quite strenuous but Allen O'Connell wanted more... he dropped the sandbag and..... that's it!!! we had an additional 10 Grunts as punishment. Thanks Allen. We had another 10 Grunts when someONE stalled and took a break before break-time.... CORPORAL CHUN!!!! Have mercy... :-p

I knew Sarge Dann wont allow Allen O'Connell to go home without OBC-BU's signature.. the Mud-Spa!!! We ran a total of 6 laps in the 150 meter per lap in an ankle-deep-mud-track holding the sandbag in different hold at each lap. The first lap was running with bear-hug sandbag hold, then sandbag-zercher hold on second lap, left-hand sandbag-suitcase-hold for another lap before changing to the right hand sandbag suitcase-hold. The fifth was the sandbag arm extension (where we ran holding the sandbag stretched-up above the head). After completing the fifth lap, we repeated the bear-hug hold and after the 6th lap, Sarge Dann commanded Steady signalling the end of the session. 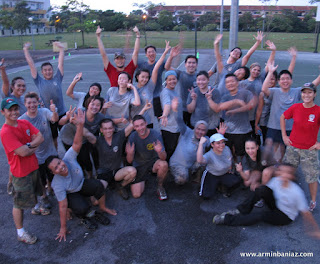 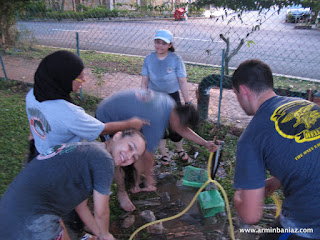 Allen O'Connel training in his Hell-Week finisher T'shirt.. only those that survived and graduate from the Hell Week are allowed to wear the HW finisher t'shirt.... 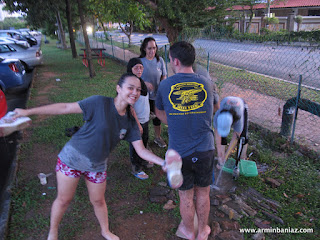 Oh well.. the water-pipe felt like a water fall after the kick @ss workout.

Allen O'Connell will be coming for friday session as well but Nawal Aini, Rose Emini Pahamin and me would have left to Melbourne for the 42.2km marathon. However, Dr Malek Aziz, Sarge Dann & Corporal Chun and all OBC-BU'ians will make sure Allen O'Connell receive his sufficient dose of adrenaline kick during his training!!

After the session, Dr Malek Aziz sent Allen back to his hotel at the Renaissance Kuala Lumpur. 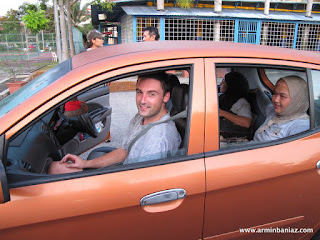 Just as the Alpha platoon left the training zone, the Bravo platoon began their session. 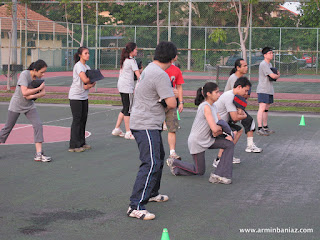 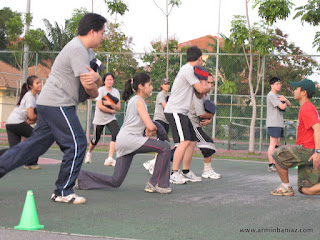 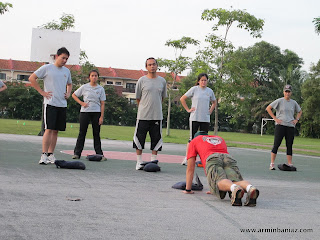 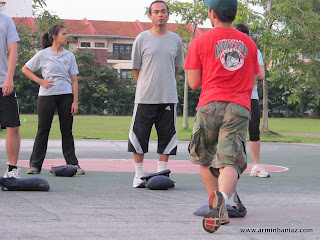 Until Friday Allen O'Connell, have a great time in Malaysia!! Its 4 days counting down to the MELBOURNE 42KM MARATHON.. I have not run for two months now since the Ramadhan and am so dead but then again, what better way to site-seeing Melbourne than to slowly cruise run walk for 42km!