PEDA: CAR REPOSSESSION UP DUE TO CHANGES IN ACT 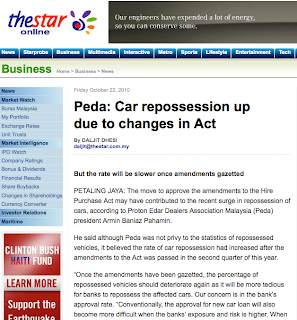 Peda: Car repossession up due to changes in Act

But the rate will be slower once amendments gazetted

PETALING JAYA: The move to approve the amendments to the Hire Purchase Act may have contributed to the recent surge in repossession of cars, according to Proton Edar Dealers Association Malaysia (Peda) President Armin Baniaz Pahamin. 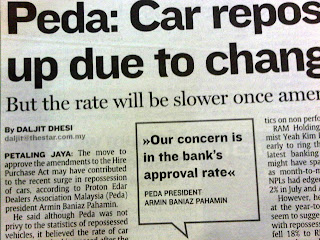 He said although Peda was not privy to the statistics of repossessed vehicles, it believed the rate of car repossession had increased after the amendments to the Act was passed in the second quarter of this year.

“Once the amendments have been gazetted, the percentage of repossessed vehicles should deteriorate again as it will be more tedious for banks to repossess the affected cars. Our concern is in the bank’s approval rate. “Conventionally, the approval for new car loan will also become more difficult when the banks’ exposure and risk is higher. When a bank cannot secure their asset via repossession, they too will revised their credit risk scoring,” he told StarBiz.


In anticipation of a stricter regulation to repossess vehicles, banks might not be sympathetic but rather secure their assets and reduce their risk exposure, he added.

The amendments, among others, entail the needs to obtain a court order before repossessing a vehicle and repossessors must be appointed by the Government and be issued written permits.

AmBank Group and Malayan Banking Bhd declined to comment on their repossession operations.
Of late, there had been frequent advertisements in news papers on property auctions and sale of used cars. Despite this scenario, various quarters do not really think there was a clear signal of an uptick in the repossession of these two asset classes. They agreed there was no proper compilation of data on repossession of properties and cars, and the only one available was the statistics on non performing loans (NPLs).

RAM Holdings Bhd chief economist Yeah Kim Leng said it was still early to ring the alarm bell as the latest banking statistics available might have sparked some concerns as month-to-month passenger car NPLs had edged up slightly by 1% to 2% in July and August.

However, he added that a glance at the year-to-date figures did not seem to suggest a potential problem with repossessions as NPLs car loans fell 18% to RM1.52bil while delinquent home loans declined by 18% to RM7.75 bil as at end-August compared with the same month last year.

The fall in monthly mortgage NPLs showed a rather stable trend, Yeah noted. The strong recovery in domestic and external demand in the first half of this year had strengthened the labour market and reduced the unemployment rate from a recession peak of 4.1% in the third quarter of 2009 to around 3.4% currently, he said.

Wages and household income had also risen with the recovery in corporate performance and rise in asset and commodity price.

Broadly, Yeah said, the consumer sector was not facing any undue downward employment, wage or income pressures. He, however, said some consumers who had leveraged to the hilt might find difficulties coping with the 75 basis points hike, as well as the rise in the cost of living, although interest rates and inflation remain relatively low by historical standards.

Besides low interest rates, another key feature of loose credit conditions is high financing or loan-to-value ratio with larger as well as access to multiple types of loans, borrowers were exposed to higher interest rate and default risk, Yeah said.

Consumer Association of Penang (Cap) president S.M. Mohamed Idris, said the association did not keep tract of the number of complaints involving car or house reposessions but was aware that there was no sudden rise in such complaints.

Federation of Malaysian Consumer Associations (Fomca) secretary-general Muhammad Sha’ani Abdullah said it too did not have statistics on such cases.

Sha’ani, however, said the rate of houses and vehicles being repossessed could have gone up due to economic slowdown mainly due to retrenchment and unemployment.