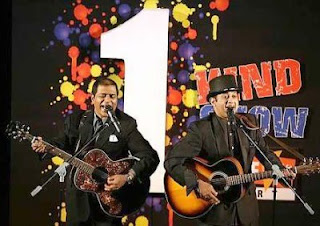 The Kings of Comedy, Allan Perera and Indi Nadarajah is a veteran comedian having being in business for the past 12 years.. although this was the first time I heard of them. We went to watch the show yesterday at the Palace of the Golden Horses after a light dinner.

We were invited and introduced to the show by Dr Malek Aziz, who first brought his ex-girlfriend (now his wife) Farhanah Bamadhaj to the show on their first date 10 years ago. There, we met a fellow Bootcamp'er Shobha and was introduced to her friendly husband Vinod Kumar.

We were seated and pre-warned before the show start, to either swtich off our handphones and mouth or we will be charge under the ISA (Internal Sound Act). 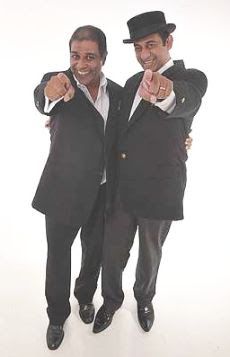 The 1 Kind show was so......... 1 of a kind. The 1 Kind show recounted the many aspect of 1Malaysia that is still a hot topic during the daily teh tarik session at the local mamak store. Their impeccable impersonation of various Malaysian accents was hilarious. My favourite was the scene at the 'Executive Spa' which really showcased the two performer's ability to imitate and spoof various kinds of Malaysian. 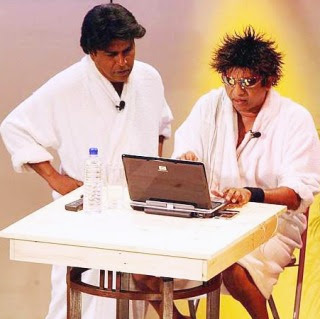 During the scene, Allan and Indi pulled off perfectly the accents and mannerism of Chinese businessmen pretending to be busy working but was actually relaxing at a spa. Whist at the spa, Allan and Indi discussed plans to have their children obtained online university degree for less than US$100 to cut cost instead of the actual university degree that would otherwise cost RM500,000.00. A fake university degree, or even a PhD can be easily obtained from the internet for less than RM1,000.00. Although it was a good laugh, unfortunately the sketch depicted a true picture of Malaysians.

I had previously blogged a few issues on Malaysian politician so called 'graduates' in various Youth exco members (including the oppositions) and a 'Work in Progress' to list all educational background of our Members of Parliements, Cabinet Ministers and the respective Supreme Council members (See: Academic 1, Academic 2).

Other current issues played by them was so fresh and current including the 'cow head' incident , a promised to be “mindful of offending Indonesians and Singaporeans” and congratulated Chef Wan Ismail on his recent award as the world’s top celebrity chef.  Another excerpt from the play that almost left me crying in laughter was the 'Ministry of Edutainment' where both of them played a two Makciks being the Ministry's officers. 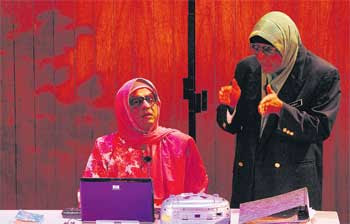 Both the tudung-clad Makciks constantly argued over the topic of having Science and Mathematics taught in English. The audience including me, laughed so loud when they translated a simple English instruction on how to instal a joystick onto their computers. Their atrocious attempts at creating a Bahasa Malaysia version of the instruction saw joystick translated as 'Batang gembira'.

Kudos to the King of Comedy.. The audience were screaming in laughter and cheering throughout the skits. We were rolling and could not stop laughing. They are both gifted especially in mockering and making us laugh at.............. ourselves!!


My only regret was to have missed Allan & Indi for already twelve years. Thumbs up to Dr Malek for the introduction. Thank you