Both a gentlemen, Kenny wore a Scottish Kilt and train in December itself (see: Kilt) but Arvind paid his dues today training in Red Skirt........


There was a commotion before the start of the session! Everybody was so excited to see Arvind in Red Skirt........ 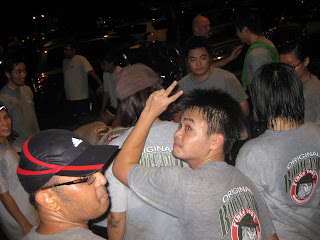 The ladies were abit shy at first to see a man dressed like them and perhaps abit insecure especially Sulo, in case Arvind looks prettier than any of them................ 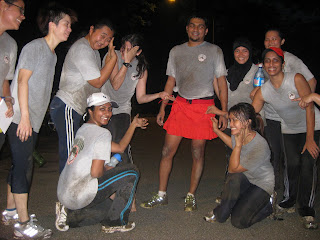 The men too could not resist the new-girl in town Arvind...  Chun was getting too excited and start showing his butt to Arvind (dont ask me why..) ... 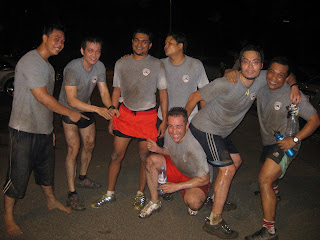 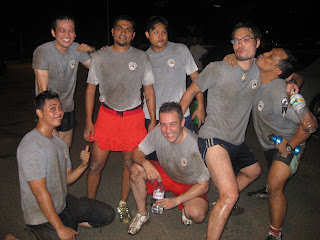 Now Chun SSJ took the lime light away from Arvind by showing his leg... 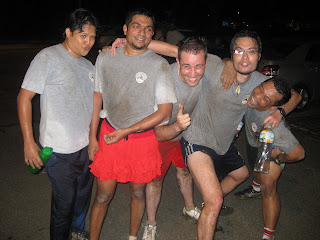 There were FOUR (4) AWOLS... and we were awarded FOUR, FOURTY SECONDS SQUAT PULSES but there were no LATE-COMERS. Recruits were divided into their respective ranks... The Delta, Seal and Rangers.

The Delta began the session with the 'Prison Break' which I cant help but to feel like Micheal Scofield... which I dont think is a misleading statement (perasan).

To start the Prison Break, The Delta was divided into two team..The prisoners and the Guards.. The Prisoners held captive lying face-down on the ground (or mud rather) with both arm hand-cuffed at the back whilst the guards were on standby to give chase 25 metres behind. When Corporal Faizal gave command to START... with both hand at the back ala being hand-cuffed, the prisoners have to get up and sprint to the yellow cone located approximately 30 meters away while the guards chased them. If the guard managed to tap the prisoner's back before the prisoner reach the yellow cone, the prisoner must perform 5 Grunts. Likewise if the prisoner manage to run to the yellow cone without being tap, then the guard that was chasing them must perform 5 Grunts. The team's role was reversed on every set.

Partnering with Marcus... I was tapped once being a prisoner and failed to chase him as a guard.. in return, I did endless grunts after grunts. Keynote... dont partner with Marcus or Kenny if you want to stay alive!!! I was practically crying for air after the second set of turbo-sprinting running away from Guards and giving chase to the prisoners, ......... At one point, I was searching for my Heart in the mud which I thought had jumped out of my chest!


We went to the second circuit with Corporal Dharmendra after 5 rounds of reverse role from prisoner to guards. The Deltas were split again into two teams with two different workout. The first team began with five rep of "Quick sprint & Drop" (drop-lie face & chest down in MUD) and then BEAR-CRAWL for 10 metres before sprinting back to start position. The BEAR CRAWL was replaced on second set with GORILLA WALK and the CRAB CRAWL on the third set.


The third circuit with Lans Corporal Elin was funtabulous!! Its the TABATA circuit or "Twenty-Second-Break-10 second". and the TABATA began with five sets of 20 seconds of STAR JUMP!! then the MOUNTAIN CLIMBERS, SEAL JUMP, CROSS-COUNTRY JUMP and GRUNTS.

COUNTING OUTLOUD... As in counting in scream is actually a good way to maintain workout.... I was practically screaming ONE, TWO, THREE, ETC.. etc....until NINETEEN, TWENTY during all workout... except during MOUNTAIN CLIMBERS............. oh god... BOMBASTIC HEART BEAT... speechless and breathless.... Chun SSj and Tomi, Daing Danial made up the Delta screaming Orchestra. Lans Corporal Elin was also screaming 100% EFFORT DELTAS.. 100% EFFORT... GIVE YOUR FULL EFFORT!!! and it suddenly stroke me our pact for 110% EFFORT & COMMITMENT. Well Done LC Elin.... thanks for the extra push. 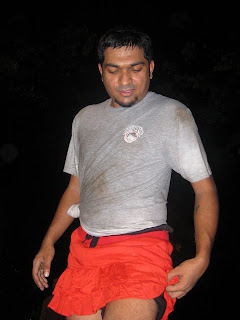 For benchmark timing updates: click the OBC logo on the left collumn of this blog or click here.
.