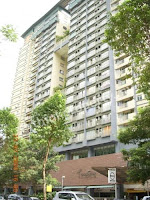 26 January 2010, my brother Faris Zulkifli was watching television at his Damansara Perdana Condo when he heard a loud 'bang' outside his condo located on the first floor at 3:30am. He walked out to his balcony and saw a half naked body on the ground floor common area. He called the Police and rushed down to the ground floor and checked the pulse but he was already dead. All the Damansara Perdana Condo security guards were hopeless and ran away. Faris went up to his condo and took a towel to cover the body. The security Guards were no where to be seen.

The badly battered body belongs to a male Sudanese student whom fell from his condo on 17th Floor. Petaling Jaya district police chief, ACP Arjunaidi Mohammed, said "The half-naked body had serious head injuries caused by the impact of the fall. We are still investigating the cause of death and have not ruled out any foul play."

The body has been sent to the Universiti Malaya Medical Centre for post-mortem. Arjunaidi said the unidentified man was a student at one of the private colleges in Damansara and is believed to have fallen from the 17th floor apartment he stayed at with a fellow Sudanese. But, during the incident, the victim was alone."We were informed that his friend are now in Canada," added Arjunaidi.

Anyone with information related to the incident is urged to contact the Petaling Jaya Police District at 03-79662222. For more stories see: Malay Mail or Harian Metro.

EMkay, the developed for Damansara Perdana or the building management office should and must ensure proper and qualified security guards are employed at all times. The guards were either scared of the dead body or maybe an illegal immigrants that should not have been employed on the first place especially to safeguard the community that resides at the condo. Residents at the Damansara Condo should lodge a police report to investigate the qualification and permit of the foreign workers employed as security guards.

What is worst than a suicide or murder is to have a non-functional security guards....