Posted by ARMIN BANIAZ PAHAMIN on January 12, 2010
*Apology for the late-posting... Was too hyper after the morning session and was in meeting till late evening*

Monday blues......... or more like a Black Monday it is..... All ladies were suddenly down with a stomach pain.. gastric, menstrual etc... and the men absent form... B1N1 sickness maybe.. Doc Malek was down with D1V3?

Surprisingly, KL ALpha was still noisy even without the Core-Kiasu.... Everybody was screaming loudly.... in pain. Today's workout is another day that defines Pain and probably a sneak preview into Hell.

Sarge Simran was back from a week of Paternity leave. He was all smile, cheerful and stress-free although we expect him to be grumpy and moody from lack of sleep and new-Dad syndrome. Life is never the same with a newborn baby in the house.... Although in cheerful mood but that does not stop the Sarge from giving us 3 sets up Squat Pulses and another 3 sets of Star Jump for 3 AWOLS and 3 Late-comers..... compliments from Kenix Lim and Leesa Tan.

After the bonus Squat Pulses and Star Jumps, the platoons were separated according to their ranking... Delta, Seal and Rangers.

Today’s theme was the FANTASTIC FOUR…  4 different type of exercises with 4 repetitions each was prepared at all circuits. Four only…Only Four.....?!!!! 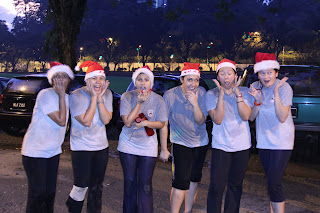 After performing 2 sets of the above, the four exercises at each cone was changed to King Kong Push-up, Jumping Squat, Shoulder press and Trusters. With the change in workout, we had to do two rounds back and forth from original starting position to complete 1 set of a total of two.

The last person to arrive on each set is penalise with 5 Grunts.... so everybody is in the look-out for the last person behind them.... 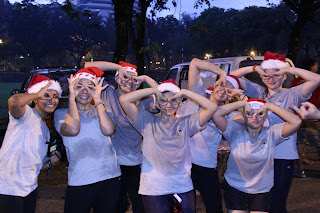 From Corporal Dharmendra, we moved on to the second circuit led by Corporal Faisal. The second circuit was all about Abdomen. With the same short sprint to Four Red-Cones, Four different types of exercises were prepared at each red-cone-stop that began with Military Sit-up on the first cone. At the second Red-cone, Jack Knife,  third red-cone was the palm to elbow and the last red-cone was the Buddha sit-up before a short burst of sprint back to the starting position. Similarly, the last person to arrive will have to perform 5 Grunts.

Today is another EXCELLENT workout by the OBC….