Posted by ARMIN BANIAZ PAHAMIN on August 28, 2010
HELL WEEK quote of the day.......
Sargent Ashton to recruits in seeing them pike into knee pushups..... "GET OFF YA KNEES!!! chief told you to take your shoes off at the fence....did he forget to tell you to take ya skirts off too????? GET OFF YA KNEES!!" (From Emily Brabon FB Status)


Day 6, the final day of the Hell Week was more demanding than the 5 days combined! More of an operation Dessert storm.. or it felt like it having had to trained in more than 50 degree slope of sand at the Wanda beach, Sands Dune without any flat surface and longer hours than any other days.

The warm-up session itself was similar to Delta session at our normal bootcamp training.  As a warm up, the platoon had to carry the boat and mock rifles from car park to the 'dessert' and immediately, climbed up the 50 degree upward-slope sand-hill with rifles stretched straight above the head.
In the same slope gradient, hell began with 2 lap of 100 meter boat race. Running in deeper than ankle deep sand was already tough but to carry a boat on a hilly slope gradient? Teary...

Running was of course too mild at Hell Week, the platoon was commanded to sprint 100 meter, bear crawl 10 meter and repeat the same on a 25 degree sand-hill slope. When everybody was half dead, they had to drag their partner 100 meter uphill and alternate it until Chief give up getting them to give up and let them all graduate from the infamous and elitist HELL WEEK...

Immediately after the session, Chief posted on FACEBOOK ORIGINAL BOOTCAMP ... 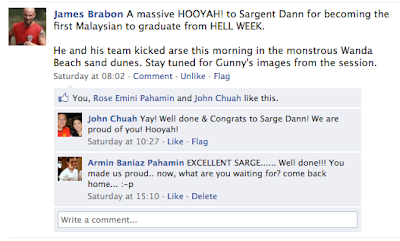 Chief Brabon: A massive HOOYAH! to Sargent Dann for becoming the first Malaysian to graduate from HELL WEEK.


He and his team kicked arse this morning in the monstrous Wanda Beach sand dunes.