BUNG MOKTAR WAS NAIVE, INSENSITIVE AND LACK OF UNDERSTANDING OF THE AUTOMOTIVE INDUSTRY: PEDA 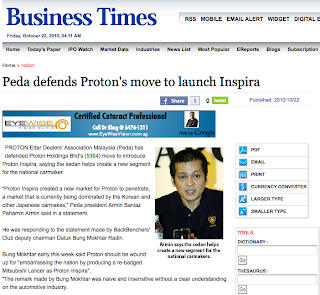 PRESS RELEASE
Kuala Lumpur, “The dealers fraternity are disappointed with the remark made by BackBencher’s Club Deputy Chairman Datuk Bung Moktar Radin calling for Proton to be wound up for embarrassing the nation by producing a rebadged Mitsubishi Lanser as Proton Inspira”, said Armin Baniaz Pahamin, President PROTON EDAR DEALERS ASSOCIATION MALAYSIA.
The remark made by Bung Moktar was naïve and insensitive without a clear understanding on the automotive industry especially Proton. The introduction of Proton Inspira  is an addition into the current Proton stable of cars. The Proton Inspira created a new market for Proton to penetrate, a market that is currently being dominated by the Korean and other Japanese makes.

Proton Inspira too provide a platform for existing Proton Owner to upgrade their vehicles from the current Proton Waja, Proton Persona and Proton Gen2.  This was a segment that was never represented by Proton and left vacant when Proton Perdana was discontinued.
With only an expected production capacity of 1,000 Inspira per month on a total monthly production of 15,000 Proton, it is not worth spending RM700million for such a small niche market although Proton has the capabilities to do so from the years of investment in Research and development.
Any investment should be geared and channeled towards producing a bread-winning model for the mass public with an engine capacity of 1.3 to 1.6cc.
The Proton Inspira is a new market segment for Proton cars and the dealers had received a good response since the soft launch even without any confirmation of the actual price. We have received inquiries almost on a daily basis for the official launching date and delivery period for the car.
The public benefitted from more than RM30,000 price difference when the Mitsubishi Lancer was localized into Proton Inspira.
The comment made was uncalled for, especially from a respectable member of parliament. For the benefit of Proton eco-system, Bung Moktar should retract his statement and abstain from making further negative remark that is not only damaging to Proton brand name but also to more than 60,000 labour workforce employed in Proton eco-system.