Posted by ARMIN BANIAZ PAHAMIN on February 09, 2011
(Pictures from library) 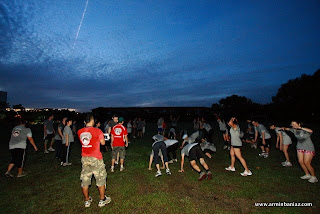 To personally welcome back John Chuah, Shear Ling Toh, Kenix Lim, Joe Liew, Freda Liu, T'yng Yng Tan and all Chinese recruits after the Chinese New Year, I generously gave out 30 Grand  Grunts Ang Paw each to ALL (even non-chinese) Alpha Platoon and Sarge Dann whom was jealous of my generousity added on an extra 5 grunts. Okay, I lied. I woke up late. I woke up at 5:30am, 15 minutes before the reporting time and arrived at 5:47pm.

The CHIEF'S ORIGINAL BOOTCAMP SESSION is always punctual being a military inspired. 5:45am means 5:45am, a second later and its Grunts as punishments!! That was why everybody had 30 grunts each for me being late and another 5 grunts was added when recruits did not COUNT OUT-LOUD. Everytime a workout is fixed by number of repetitions (including punishment), ALL RECRUITS MUST count outloud; failure of which... other people will have twisted neck injury twisting their neck to check out our nicely trimmed, sexy legs.  Not counting outloud tantamount to more grunts as punishment and that will lead to extra hot, sexy and spicy legs. 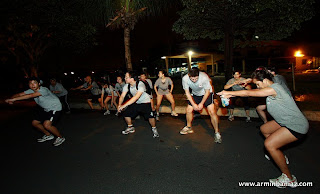 No wonder John Chuah & most recruits were handclapping & cheering on my late arrival and purposely did not count outloud while grunt'ing!!! They all wanted those extra Grunts. *reverse psychology..

The first workout with ropes began with 8 sets of squat (Arrrrgh legs!! after 35 grunts...). Then we went on to another 8 sets of thrusters!! Lunges with the ropes still stretched high up above the head before doing another 8 set of squat pulses. All those leg workout after 35 grunts... with the wobbly legs, we had to run and running with the not-talking-to-me-legs, it felt crying-without-tears. Okay lar.. it was not that bad but was just being abit dramatic. On a more serious note... with lack of sleep, inconsistent training, the leg workout did felt painful!!!

After the leg workout that almost killed me (being dramatic), with the hand still glued holding the ropes, we continued with 8 sets of front raised for the Deltoids muscle (shoulder). When the shoulder stopped talking to me, we went down for 8 sets of Deep Pushup with hands on the rope. Although the chest now felt numb and in tantrum, we stood up and did another 8 sets of standing chest press with the rope!!! Although the chest felt so numb but it is hard and firmer...

Last but not least, we did the Single Arm Lateral Raise (switch arm between sets) for 8 sets on each arm!! Everything is on 8 sets.. Maybe Sarge Dann wants better Ong!! Better Luck!!! that he prescribed everything bearing 888888... 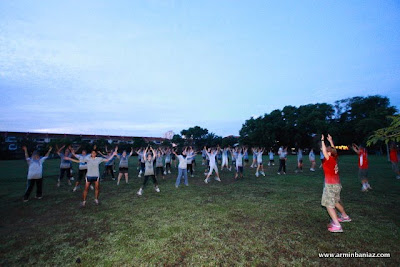