Posted by ARMIN BANIAZ PAHAMIN on February 11, 2011
(today no time to find picture)

The running fraternity is growing more rapidly as more and more running-virgin-recruits turning into runners but that is not the only activity that recruits at the CHIEF ORIGINAL BOOTCAMP (COBC) @ Bandar Utama & USJ1 have adopted. The other passion that is quite common among recruits at COBC BU & USJ1 is of course EATING!! There's a rumors that a couple recruit at USJ1 Kok Joo Sam & Angeline Gan owns and operate the Subang Crab House, a restaurant that specialize in CRAB??? CRAB!!!! THAT'S MY FAVORITE!!! I have not ascertain if the rumors is true but if its true.. than we should attack the restaurant almost immediately!!! Who can resist Crab!! Especially in support to our fellow recruit!! 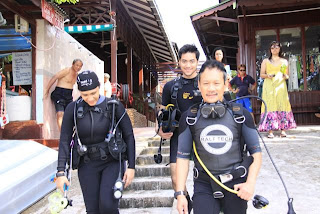 Beside that passion for running & eating, another growing fraternity at the COBC BU & USJ1 is DIVING!! Yesss.. DIVING!!!

The Diving fraternity among recruits at COBC are growing fast although not as rapid as the runners but enough to create a diving society at the COBC. As it is, there are two master-divers that would do hundreds of Grunts as long as they can go diving... eh okay.. abit exaggerated but its a figure of speech.

Anyone whom wants to try out diving, can get in touch with the Starbuck-Coffee-Addict Suriana Saiful Yazan by calling her at 0193893088 or emailing her at suri.saiful@gmail.com or add her on facebook by clicking HERE.

In April this year, a group of Virgin-Divers Lilian Lee, Lizza Rahim and Sarge Dann will be taking their diving lesson & license... Last year, 30 of COBC recruits received a certificate for conquering the Mt Kinabalu. Health, fitness, sports and outdoor activities are a common passion shared and enjoyed by most recruits.

So whether its for running, or for EATING, or for Diving.... the CHIEF ORIGINAL BOOTCAMP is where it start... We have to be fit to run races, we have to burn calories to eat more and must be able to breath well under water which we were trained when we were breathless gasping for air most of the time during each COBC training.

Whatever the target is, at the 6th February session, these runners, divers and eaters got what they signed up for!!! A helluva heart bursting high intensity training with the "GO AWAY CHUN CIRCUIT" which was the most suitable title for the first circuit today.

Shortly after our session began, a red Jaguar was spotted entering the compound. It was Bravo recruit Rose Emini Pahamin!!! Perhaps she wanted to follow my footstep to give out 30 Grunts ANG PAW!! or maybe she wanted to sabotage platoon Alpha with 30 grunt (Grrrrr). It turn out, she was stingy.. and did not give the 30-Grunts ANG PAW not like the generous brother me!! Rose Emini Pahamin was was late for Alpha but too early for Bravo... and she went back to bed.

Angkel John Chuah was no where near the training ground. Once in awhile that young CIMB senior management do became an Uncle and either confuse or forgot today is the COBC session or maybe he was still spending my 35 Grunts ANGPAW. James Fong & Mek Yam chan Siu Cheh too was probably busy carbo-loading in Penang or lying by the beach to make me jealous..... Grrrrrrrrr.

Sarge Dann was down with bad gastric and could not sleep the whole night but that did not stop him from attending to us today. There is nothing that can stop or keep this young, firm and assertive Sarge away from the COBC. Today is a special day for Sarge Dann... It is his girlfriend's birthday! Being discipline, committed, firm, assertive, punctual.... We wonder too if he is anywhere close to being 'romantic'...

The tall, unshaven Korean-look Corporal Chun did the roll-call and the hot sizzling gorgeous Corporal Nawal took the warming up before the platoon was divided into their respective rank. The Delta went with Sarge Dann, Seal with Corporal Chun and Ranger went with Corporal Nawal. I was re-designated to be surrounded by the not-available-but-extra-hot-babes in Seals. The bug among the torns.  With me was Freda Liu, Ilyanna Aylin Ayob, Shear Ling Toh, Rienna Choo and... err.. memory lapse.

The circuit thereafter, was legs, shoulder and abs.. as in 3 sets of 4 workout for each sets. For legs we had 3 sets of Courtsey Lunges with Rifles, Squat jump, Thruster with Sangbag and Switch lunges. We did the front-hold rifle roller (or whatever its called), 3-point pushups, alternative shoulder press with sandbag and deep pushups. The abs workout comprised of 3 sets of Jackknives with Rifle, Touche-De-Shoe Crunches, Getup Situp with Sandbag and Monk Crunches!!! I cant help but to scream JOHN CHUAH... NO STALLING!!!!!

At the end of the session, we finally figure out the objective of today's circuit...... Sarge Dann wanted us to 'Tapau' some pain for the whole weekend!! Its FRIDAY.... "Thank God Its Friday"? TGI Friday? it turn out to be "Ouch Not on Friday"? ONtO Friday!!