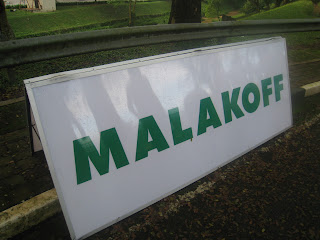 I achieved my 2009 running resolution and ended my 2009 running calender with the Malakoff 12km run @ Bukit Kiara today. The Malakoff race this morning was my 11th race this year and my 30th race in total since I adopted running as a hobby. My 2009 resolution (or one of it) was to participate in at least 10 races in 2009. The longest distance I ran this year was the Great Eastern 30km run on 18 January 2009 after some 'technical error' in the Singapore 42km marathon registration. 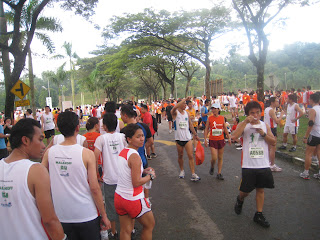 We parked the car and jog as a warm up for 10 minutes to reached the Start/Finish point and took a pink-wrist band as a form of registration. The race was flagged-off by Ahmad Jauhari, the Managing Director of Malakoff at 7am sharp. There were thousands of athlete running and the race began with a heart-throbbing 2km uphill route.... the killer!

The race was well-organised with sufficient supply of water & cups at all water stations, There were three water stations located at every..... 2km? All athlete was well hydrated. There were also lots of medic on standby by the roadside and most importantly there were negligible race marshalls on motorcycle & very few vehicle traffic that polluted the air with the exhaust-fume during the race... this unnecessary 'pollutions' was very typical in most other running events. Thumbs up to Malakoff, a race that I will never missed every year. 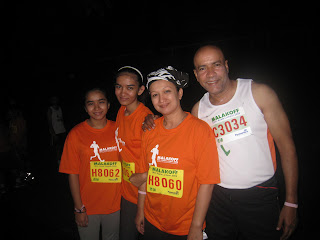 After the first 2km uphill climb, runners were given another wrist-band that was white in colour and another wrist band in red as runners completed the 2nd running loop. The whole running route was hilly and heart throbbing but the weather was a runner's paradise.

At the first running loop, I met Shobha and Peggy, a fellow bootcamp'er running in pair. This run was Shobha's first race and Peggy's second. I saw Vinod, Shobha's husband earlier at the start of the race, standing under a lamp post and later waited by the finishing line for Shobha to complete her first race. Both Shobha and Peggy completed the race in 1 hour 17 minutes. Well done Shobha and Peggy!!!! The timing was good for a virgin runner. 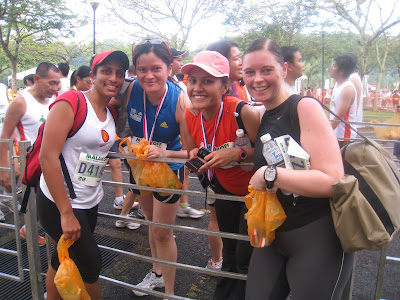 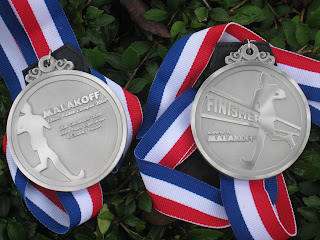 With the three colourful pink, white and red wrist bands, I crossed the finishing line in 1 hour 25 minutes and burn a good 1170 calories.

It was a wonderful and pleasurable run. 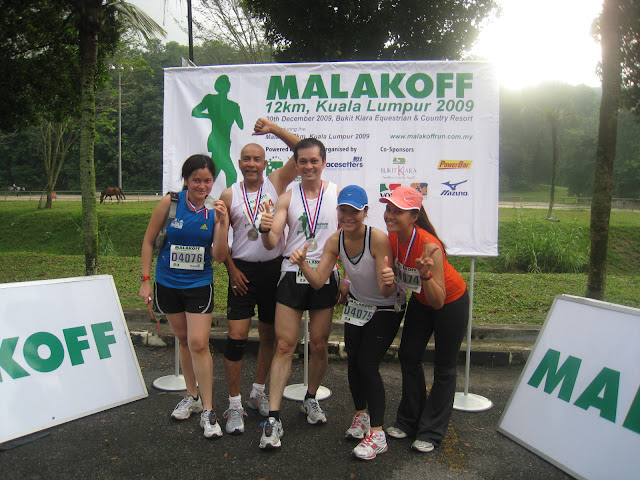 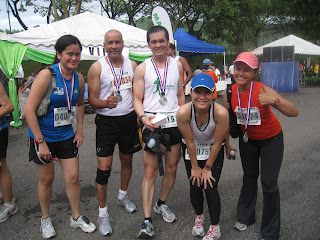 Faizal Ariff, one of our OBC coach had promised to wait at the finishing line to give us moral support but he too similar to his chief & Suriana had overslept... but came to join us for breakfast....  In fear of us not recognising him, he wore the scary grey Bulldog OBC T'shirt. It was kind of Faizal to wake-up early and joined us for breakfast or maybe he came to meet someone..... ? 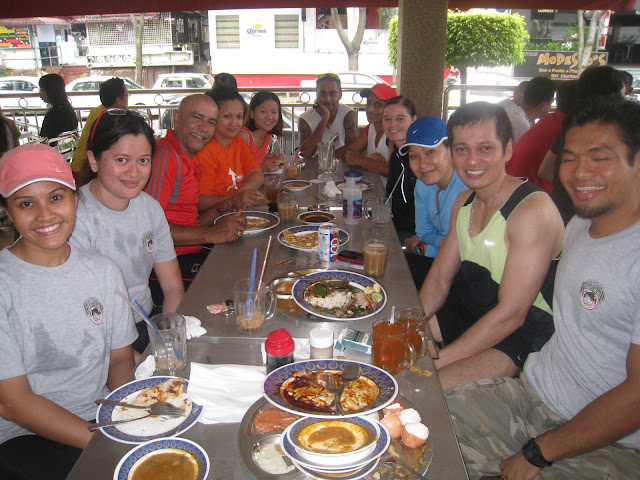 (err.. dont get con by the plate of rice infront of me, I only had 4 half-boiled egg, tosei and Nescafe Tarik)