Today, 30 December 2009 was the re-scheduled date and I received 3 wake-up calls from Rose Emini Pahamin, Abu Lais Walli Mohamed and an Unkown-Oversea-Number at 4:30am to catch a Malaysian Airline Flight at 9:10am. All those 'Did-not-Believe-I-Can-Wake-up' calls worked and I arrived at the Kuala Lumpur International Airport (KLIA) before 7am.

With only a few of hours of sleep and all the 'Did-Not-Believe-I-Can-Wake-up' morning calls were all for nothing with the FOUR HOURS AND TWENTY MINUTES flight delay.

For the 4 HOURS AND 20 MINUTES delay, Malaysia Airline compensate us with a 'Not-So-Funny'  piece of brown paper for breakfast... 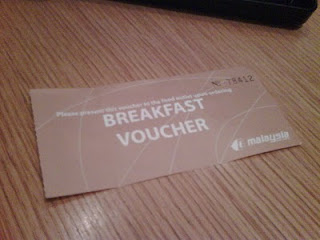 The brown piece of paper did not look very apppetising so I ask for some salt or Chilli Sauce to add some taste  to the tasteless-paper but the check-in counter did not stock any condiment.

I gave the not-so-appetising-piece-of-paper' to the Police Officer on-duty instead and here I am blogging at the Golden Lounge with free-flow of food, drink and internet access.

With the 'Not-So-Funny' 4 hours 20 minutes Flight delay, maybe passengers are better off with 'Now-Everbody-can-fly' Airasia...