It was bring a friend day this morning and there were many Newbies with a total of 66 attendance (including existing members) that had their first taste of Bootcamp with the Squat Pulses......

Unbeknown to the Newbies, we have various jargons which I felt responsible to orientate or educate.

The most important jargon is AWOL.. which some understand by 'Absent-WithOut-Leave' or being absent without informing the OBC personnel via the Handphone number 0126682267 but actually AWOL means 'A-Way-Of-Life' with 'Additional-Work-On-Legs'!! Thats why we have to accept AWOLS as a way of life for a sexier legs!

Two form of exercises were designed for a sexier leg and 'form'... one that was specifically designed for women is called the Squat Pulses which the men too had to perform, to understand women's agony in that position... and why they can sometimes be extra noisy. The other exercise is the Grunts or modernising  the boring military position for men to be more aggresive but women had to performed the Grunts too for better understanding of how hard it can be and why men are abit quiet... breathless.

So understand the AWOLS and perform both the Squat Pulses and Grunts perfectly for better harmony.

Taking a water break while doing it can be an anti-climax.. so most of the time, water break is restricted to only 45-60 seconds for uninterrupted performances.Sometimes, when the trainers felt the existence of disharmony with some men or women taking longer break, while other men or women are eagerly waiting for some more, they will again prescribe the Squat Pulses or Grunts for better Harmony.

So please dont leave others wet, hanging and eagerly waiting while you take your own sweet time.

It is very difficult to do it without getting wet and sometimes we have to add some spices for additional pleasure by exploring with mud....and at times with some element of masochism via added toys such as ropes, tyres, sandbag and bluebarrel.

Dont worry, there are no additional or extra charges for the usage of other toys. It is all provided for on complimentary.

It is perfectly fine to groan, moan or scream while doing it. In the past, there was also name-calling and tearful cries probably from the saddistic moment in heaven and hell.

When the trainers speak, it means we will be torture.. so we MUST PROTEST by giving him the SILENT TREATMENT. If we speak while the trainer were talking, then we are not protesting and more torture will be prescribed with Grunts or Squat Pulses..

TALIBAN- Refers to the well beard-ed Trainer that can sometimes leave seniors and newbies feeling like committing suicide ala AlQaeda. You can take turn to shampoo his beard if you want to be nice to him although he kept his professionalism and his distance from getting personal or socializing with members.

CHIEF KIASU- refers to the oldest by age and pioneer member of the OBC.

KIASU- Refers to everybody at Bootcamp although the level of Kiasu-ness may differ.

ACE-PACT - originated by KL ALPHA and refers to a PACT MADE with ALL KIASU (irrespective of camp) for FULL ATTENDANCE!!! Any Kiasu that missed any session, MUST wear an outfit that will be decided by the Board or the Council of Kiasus and TRAIN IN IT during OBC session. For more information see Kilt 2, Kilt 1.

SNN (OBC's CNN) - refers to Shobha News Network. Any gossips or news is fastest delivered via the SNN @ OBC... it will be broadcasted here at this blog once captured by ANN (Armin News Network).

FFK- Fong Fei Kei (in cantonese meaning- Chicken Out) the title FFK will be bestowed by the Council of Kiasu to whomever that 'Chicken Out' from training or benchmark timing.. so far nobody has been bestowed with the title yet.

SSJ- Sot Sot Jor aka 'Wayaq Putuih' aka 'Tiga Suku' aka 'Weirdo'  is a title bestowed by the Council of Kiasu to deserving member. So far only CHUN CHIA KAI SSJ (Hon) was awarded for his Weirdo-ness.

With that I hope all newbies are able to cope and understand the weird jargons used. Today's session was fairly friendly with the 66 participants divided into eight teams and gathered at 8 points that made-up a big circle. Whilst one team run around the big circle bypassing all the other team at the 8 points, every other team must performed a fix per point exercise.

The 8 fix per point exercises are as follows:

Point 1: (Where my team started), workout with Sandra Baglock (Sandbag). We had to perform Jumping squat with Sandra.
Point 2: Clapping push up
Point 3: Standing Push and Pull Rifle
Point 4: Rifle Military Sit-up. Performed sit-up with both the leg locked with a partner, then lower the body with holding the rifle up, then rise and pass the rifle to the partner before lowering the body back 45 degrees and so forth.
Point  5: Fat Rope Squat. With 4 members per side, we had to lift Ms Tee (Tali) and performed squat
Point 6: Starjump
Point 7: Planks
Point 8: Cross country

Once a team had completed the run across the big circle bypassing all the 8 points, then the next team (anti clockwise) runs while all other team move to the next point and performed the workout fix for that point. The whole cycle is completed once every team had ran, moved to all the points and performed all the fixed workout.
After the Newbies day.. aka BAF... (Bring  A Friend) day, 33 Kiasus went for breakfast and had a HooHaa merapu'ing (talked nonsense) time at Bestari Mamak Corner @ Desa Sri Hartamas. 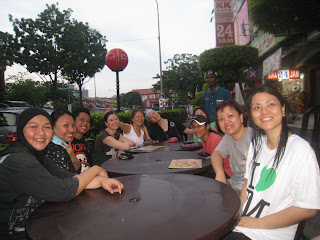 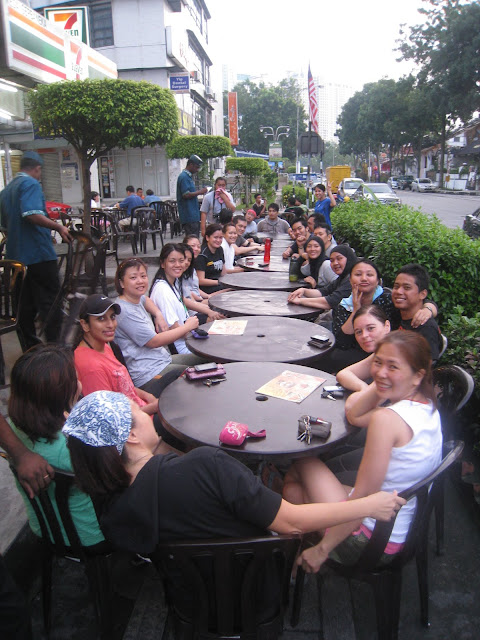 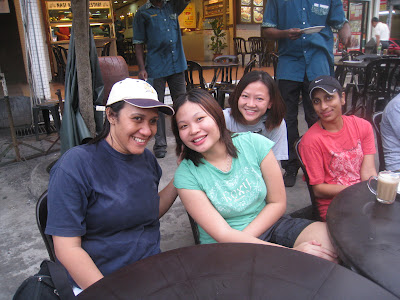 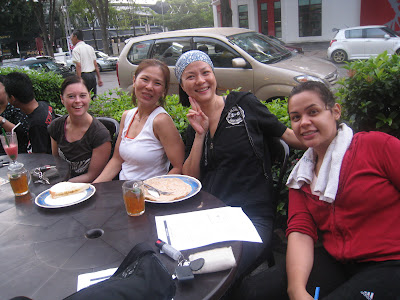 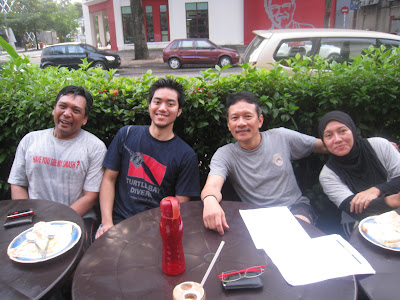 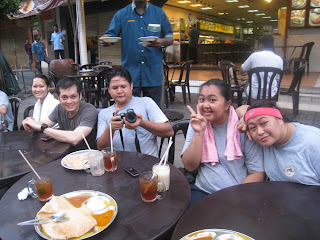 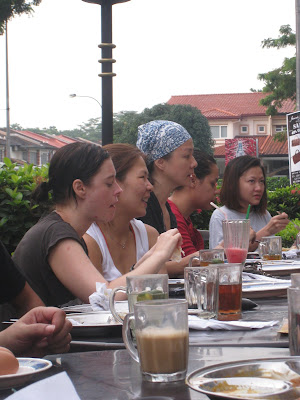 On behalf of ALL the Kiasu..... Bon Voyage KENNY SMITH and do convey our warmest regards to Michelle whom had left for Australia earlier. You do need to be near Michelle after various overdosing beer session alone. Merry Christmas and Happy New Year... See you next year!!

To all the friends who are running the Malakoff 12km race this Sunday, all the best and have a good weekend.

Stay Tune.. Until next Monday for another session of AWOLS....