Posted by ARMIN BANIAZ PAHAMIN on June 19, 2010
.
18 June 2010. 700 calories burn & free body scrub!!! Aiiiyaa.. Spilled out the beans... this was suppose to be the end orgasmic statement but was abit impatient. I mean, when was the last time you had your thigh, tummy and the inbetweenies scrubbed? very Kinkilicious..

Sarge Dann, Corporal Chun and LC Nawal were the Reds... and we were group-up for the Rope-Climb-Relay!!! This is exactly why I love the program at the Original Bootcamp (no this is not an advertisement) but this is exactly why it is so addictive!! At every session, there will always be something new!!!

To add up to the excitement, Freda Liu is back after a quiet disappearance to Penang where she carbo-loaded herself for the bootcamp.... or maybe she came to bootcamp to burn the loaded-carbo? We also had a new pretty & single recruit, Michelle.

I would never imagine myself climbing up using a rope!! I never thought I could do it.. but I did it...although it was a horizontal climb, but I did it with honor. Pulling my 69kg body weight was not easy!! The horizontal Rope-climb worked out the back muscle, bicep, arm and also the abs. Excellent combination of workout.

We were divided into a smaller group for the rope-climb relay. On my left was Dr Malek Aziz and Amir Hisyam. On my right was John Chuah & super-fit Sandy Robert. I was sandwich by fittest of people. I was partnered up with James Fong. Immediately when the climb started... everybody became 'Cheer Leaders... and the cheering goes JAMES GO JAMES.. JOANNITA YOU ARE DOING GREAT... but there wasn't any pom pom girls in skirt... siigh.

While I was struggling with the climb.. the earth & grass was scrubbing & massaging the thigh, stomach and err (censored). After the climb, we ran and sprint forward to the marker cone and sprint back to starting position and did the squat while waiting for the other team member to climb the rope. Joannita Zaleha Yusof was great, we saw how she was determine to climb the rope pulling herself and gave her best effort. We cheered for her all the way... The team work support spirit was so alive. The rope climbing was natural to Ody Lana.. she breezed through so easily.... maybe due to her petite size which made me look like a gorilla. Michelle, the new recruit was superb. Although new, she fitted in with the crowd almost instantly and never gave-up.

Team members in-waiting for the rope, first did the squat for a stronger leg, then the plank hold for core-muscle and and later the side bridges for a trimmed abs. I saw someOne (you know who you are) tried to cheat..... (hehehe) but I quickly called her name and she was back in 'form'. James Fong.... needless to say,  went straight on to 5th Gear.. Almost like a turbo charge. 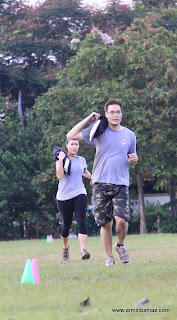 After 15 minutes of rope-climb-group relay, we had the Runaway-Sandbag. The runaway-sandbagger first had to run on-sandbag-bearhug for a few laps, then on zecher-hold and on briefcase hold!!! I thought it was not easy but John Chuah & Sandy Robert on silent-mode made it look like a walk in the park.

The last circuit was the Fire and Movement. Its like.. run then drop to escape being fired/shot at, while the other partner cover-up to spot an enemy. On partner-base Alpha & Bravo, Alpha sprinted 10 steps forward and 'drop-down' flat with chest on the ground presumably to escape being shot while the Bravo was on the look out for Communist.. Err I mean the Reds. Visualizing there were no Reds, the bravo followed suit and drop down beside Alpha and cover-up Alpha from being shot while Alpha continued to run another 10 step and drop down again and so forth until both Alpha and bravo reach the end-cone marker. While running forward.. a communist in Red gave chase but luckily we escaped the Reds by dropping down camouflage by the grass & earth.

While some were struggling on the last circuit, Dr Malek Aziz & Amir Hisyam were the Kiasu'est of all... they speed and sprinted to be the first to be the fastest. Of course, me & James Fong and John Chuah & Sandy Roberts gave them a good chase.

It was a good & great 1 hour kick @ss session but when I checked my Polar for the Calories burn, ... it stated as ZERO HEART RATE & ZERO CALORIES BURN!!!! EEEeeeks. Aiicks... am dead? No.....
I forgot to wear the polar strap!! Ceh.... but fortunately, there are a few others with Polar. The reading from Razlan Nizarudin's polar state 705 calories burn !!! 705 calories!!!! YAAHOOoo

With the tummy & thigh scrub from natural organic grass & earth, we left home feeling all 'natural' without any skin left??? :-o