Pahamin Rajab became a father 39 years ago when mum gave birth to Chempaka Emalin Pahamin, a year after their wedding on 23 July 1970. 40 years ago!!! Dad raised Chempaka Emalin without any 'Father-Hood' experience but I was lucky, Dad has had 3 years of raising Chempaka Emalin by the time I was born. Less than a year of being pampered by Dad, Melor Edina stole the attention... and later Teratai Edithy Pahamin, Rose Emini Pahamin then Amnan Bazli Pahamin. 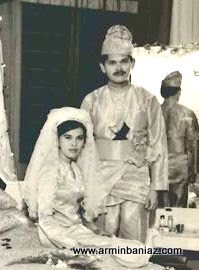 With 6 siblings in the family, it was not easy to get attention from Dad but Dad does not have any favorite child. He love every children the same and showered everybody with the same care and love. However, 'meritocracy' in the family does have some privilege. Maybe Dad runs the family like the Government. Our KPI then, was nothing less than 'no 1' or all As. Whoever that scored no 1 or all A's in the exam (primary or secondary) will get whatever we want.. anything from a world tour to computer etc. Sometimes, me & Melor Edina purposely did not get no 1, in case Dad will go bankrupt. We were very thoughtful.

As we grew up into our teens, Dad was very adamant against Boarding school... When most friends left for Malay College Kuala Kangsar (MCKK), Royal Military College (RMC), MRSM etc for secondary schooling... I went to Bukit Bintang (Boys) Secondary School (Boy school!! No girls!! Dad!!!!). Dad refuse to allow us to be separated! He & mum wanted to raise us themselves and instilled their values, belief and principle. Every growing-up years were very important to him.

Living with Leukaemia and accepting sickness was a nightmare. Once, my body just felt paralyzed and I just could not moved. I was bed-ridden and could only open my eye. and when I open my eye, Dad was there beside me. Everytime I need somebody, he will always be there... without any complain or remorse.

When Dad was recovering from a heart-attack and I was recovering from the Bone Marrow transplant in London, we always went for a morning walk together around Montpelier Park, our neighbourhood in Ealing... During one of the walk, there was a drunken man whom marched straight at me (God knows why..), I saw the half awake intoxicated man wanted to grab my water bottle... but Dad although weak from the 'heart-attack', being protective, quickly pushed the drunken man away... He is very protective over his children disregarding his own state of health.

This morning, as I 'checked-in' my Facebook, I saw Nawal Aini Zulkifli's facebook-status that quoted how much she misses her dad on Father's day. Nawal Aini's dad passed away in 1996 from stomach cancer. I am grateful that Dad is still around to see me being as great a father as him and to see the birth of Pahamin the 3rd... Aaraf Armin. I sat quietly in my study room at home...... and pray & thankful to ALLAH swt for giving me the best dad ever.... ALLAH HUAKBAR.. I love you always.