It was a sheer bonus for us to be in Penang to coincidentally discover the annual Penang Chingay, Lion and dragon dance parade that was held on 17 December 2011. We were there for food Penang CHIEF'S ORIGINAL BOOTCAMP (COBC) inaugural graduation beach party, COBC training at Padang Polo and for a meeting with the Penang Skill Development Centre. From a 3 in 1 visit, it became a .. err 5 in 1.. including the Makansutra!! 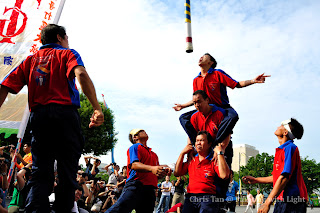 At the graduation party, the Chingay and Lion dance parade became the topic of conversation amongst the Penang'ites. During one of the group chat with Rohan from Korea, Jennifer, Phat Ling, Phaik San (did I miss anyone?) described Chingay as a 6 foot pole balancing art on the forehead which I initially mistaken it as Pole Dancing.. I mean.. the Chinese sort of pole dancing.. not so kinky eh.. aiiks. Chingay taken from Chinese dialect Hokkien, in pronunciation as Chin Yi means True Art. For more details on Chingay Parade, click HERE.

Chingay that was originated in China, was first performed in Penang in 1919 during deity processions. It is a street art where the performer balances a giant flag that ranges from 30 ft to 35 ft in height and about 60 pounds in weight. Over the years, the local Chinese had improvised the Chingay performance. From a basic giant flag balancing by a solo performer, Chingay became a team performance that consists of more than 15 persons in a troupe. 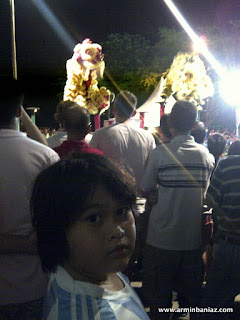 After various attempt with failure to invite COBC KL'ites especially Nawal Aini Zuklifi to the historic Penang Chingay and Lion Dance Parade, only Aaraf and I drove to Padang Esplanade (Padang Kota) and I was impressed with the biggest crowd in Penang little town. There were 22 teams that showcased their balancing skills on stilts. Somehow, this event had attracted thousands of Penangites. Seldom do I see an event that was attended by thousands of locals. This was a great event.

We were impressed at the Lion dance or shall I say acrobatic. The lions were jumping and dancing, the movements were really skillful. The crowd were hysterically impressed with loud clapping and cheering. Aaraf was stunned and speechless.. I was.. err all sweaty and tired trying to block passersby from blocking Aaraf's view but I take personal interest local or international culture, art and history. To see how Aaraf enjoyed himself.. was god gift. Nonetheless, it is his school holiday. 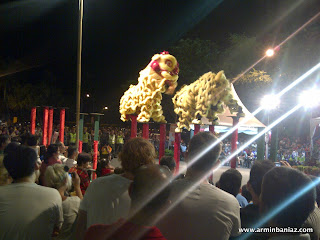 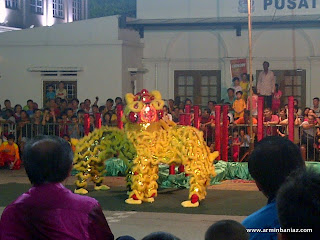 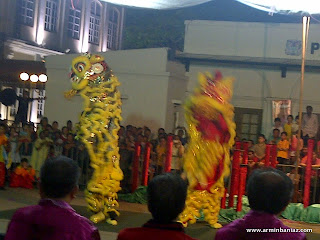 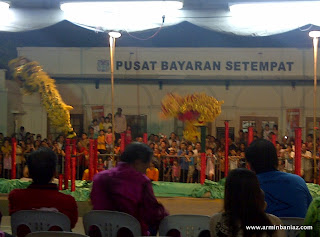 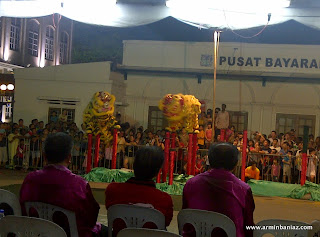 After being hypnotized by the lion dance performances, we went to see Penang by-night on trishaw.. I have to admit, I never thought a ride on a beca (trishaw) can be so wonderful.. and Aaraf too loved it!! 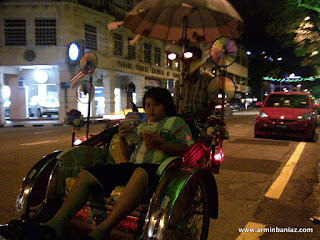 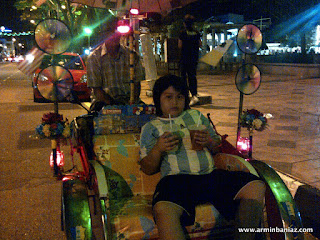 It was Aaraf's first parade outing and first beca-ride!! We both love it. Thank you Penang. We will be back!!