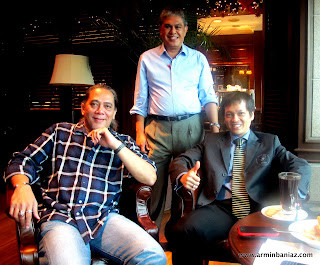 After the annual PROTON network convention that unveiled PROTON's 2012 plans and the latest baby, we bumped into Datuk Ahiruddin Attan or more popularly known as Rocky's Bru. If there is one man that I could idolise as my blogger idol, then it must be Rocky! Both Razak Aziz and me have been Rocky's blog follower since ..err forever. Naturally, when Razak Aziz or more popularly known as "Jak" called me to say that he was with Datuk Rocky.. and I was accompanying Dato Seri Syed Zainal addressing the PROTON Service and after sales network at the Sunway Pyramid Convention Centre, I quickly sms Jak.. "Sh@#t, I cannot leave now. You keep him there! I must meet him".

Having followed his blog for years, I visualized Datuk Ahirudin Attan as a serious.. maybe the fierce unfriendly type and a man of few words. Usually those were common traits of various authors, one can either speak or write and seldom both but Rocky was a complete contrast. He was all smiley, friendly and approachable. Clad in a rock stoned-washed blue jeans and shirt with long hair, Rocky is a real rocker. His knowledge of current issues were exemplary and a conversation with him can be addictive. I mean that was why his blog is our all time favorite. Datuk Ahirudin bin Attan is a journalist who is the advisor to the Blog House. He started the first blogpaper called the Mole on 16 September 2011 at HERE.

After more than half an hour, we parted when Datuk Rocky with another Datuk had to leave for another appointment but was assured to have a longer cup of.. err latte.