UP CLOSE AND PERSONAL WITH MAY LYN WONG 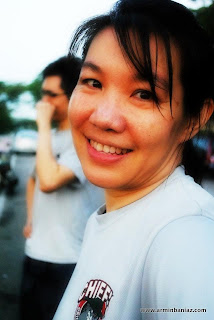 In two months, May Lyn Wong will be celebrating her 2nd year anniversary since she joined the Chief's Original Bootcamp (COBC) that had initially only cost her RM49 during the first trial month via the Groupson promotion. Her first year in the COBC network was under a different franchisee before the current management took over. The iron lady of Subang Jaya USJ1 Charlie platoon was always envious of those athlete with great stamina and well toned body because she was never good nor was she seriously active in sports. She only participated in various sports activities during school to graduate with an impressive school-leaving-certificate. May Lyn Wong was the jacks of all trade in all sport activities from netball, hockey, squash, basketball and all other sports but those enthusiasm barely lasted more than 2 months. That was May Lyn's deepest dedication to any sport activity.... 2 months.

Although her interest in each of the activity was never lasting but May Lyn was never exhausted in experimenting various outdoor activities. In her early 20s, she had been out Scuba Diving but that too did not last, citing scarcity in Cash as the reason having only started work then. May Lyn had endless trying-all-activities-and-stop cycles but the most memorable was the climb up Mt Kinabalu in her late 20s. Although unfit but May Lyn was able to reach the highest peak in South-East Asia and had the privilege of having the whole peak to herself to camwhore because everyone else had already descended by the time May Lyn reached the top. 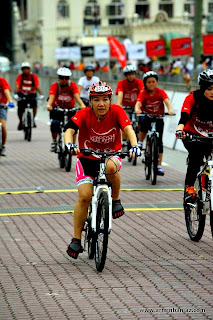 After the Kinabalu expedition, May Lyn confined her workout and exercise to the comfort of the air-condition boutique gym which lasted only for 2 months too!! Then came marriage and the arrival of May Lyn's handsome and macho son Jason but May Lyn never did give up to find means and ways to exercise. Her last attempt also lasted for only 2 months before May Lyn delegated her only form of exercise then, walking the dog to her maid. May Lyn retired from exercise since then and befriended the couch and the fat.

May Lyn first read about the Chief's Original Bootcamp (Formerly known as the Original Bootcamp) in the early 2010 and was very tempted to join but being the author to the imaginary book "Idiot's Guide & 101 reasons to avoid exercising" instead of enrolling, May Lyn found yet another reason not to start stating the house was too far from the training field. Her weight was assuringly growing as the 101 excuses gets thicker. She took up dieting cum starvation instead of the conventional exercise to lose weight... but that too lasted for only 2 months!! Through God's grace, one day May Lynn incidentally saw a friend 'Like' the Original Bootcamp in Subang Jaya page on Facebook and after a bit of reading... she discovered that the bootcamp was only a stone throw away from her house and that had invalidated all excuses from her infamous "Idiot's Guide & 101 reasons to avoid exercising" imaginary book!!! May Lyn finally enrolled and actually attended!!

"My first session was a pure torture!" said the co-owner of her family-run business in aluminium and glass fabrication. "I told myself that I'm not going back to bootcamp and if I had not paid up I would not have!!", continued May Lyn whom was twice voted the Spirit of Bootcamp for Subang Jaya USJ1 Charlie by her fellow comrade.

May Lyn said, "I started counting the number of sessions left for the month and somehow by the final week, I was hooked. My stamina have improved tremendously". This is quite true especially for non-athlete. The first two weeks will be the worst but the last two weeks, we usually feels stronger and fitter and by the end of the month, our energy is usually prominently elevated and the mojo should be at the highest. May Lyn broke her lifetime 2 months-only record with sports activity!! 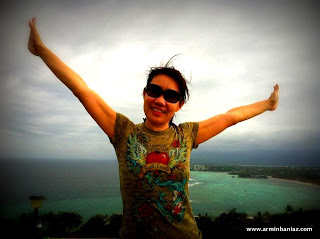 "However, after about a year in bootcamp the passion started to fade, said the once an active bootcamper!! "I started calling back my old friends Ms Lazy and Mr Fat and we are back into being not-motivated!!", continued May Lyn. "I was starting to get lazy and not motivated. I used to have full attendance every month and slowly I started to skip sessions and even took a month off. When the franchisee opted out of the Australia's ORIGINAL BOOTCAMP and rebranded themselves as the RBC, everything changes and that was when I bid my passion to exercise farewell!!", said May Lyn in frustration.

"But after being in a successful program, I craved for more. When COBC under a new franchisee offered for all first timer, the introductory promo of RM49, I could not resist but to try it out with them and never realized it will be a life-changing experience", said May Lyn back in her cheerful state.

"The 21 years old Australian program works!! The deliverables by COBC instructors are indescribable that even after 10 months of being under-training with them, my mojo, energy and passion grew even more and stronger with every sessions!", said the the author of "Idiot's Guide of 101 reasons to avoid exercising" imaginary book. May Lyn is now the biggest advocacy and became the author to the best seller "DONT GIVE ME REASON BUT TO EXERCISE" imaginary book. 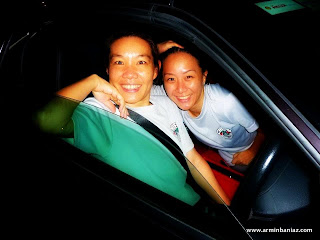 From May Lyn's previous nature citing distance as one of the 101 reasons not to exercise, May Lyn now alternate her workout and drives from Subang Jaya to Bandar Utama, Shah Alam and even all the way to Cyberjaya and she brought along with her more than a dozen other recruits. There is now no distance that is far for the Iron Lady. "This is something I can never imagine myself doing it!! driving at 5am just to exercise never existed in my vocabulary", said May Lyn in her charming smile.

"My energy level now is forever high and having the instructors pushing me beyond my thinkable limit was an extra-ordinary feeling.. an experience that I had never felt before. No matter how torture-full and hard a training session can be, I always felt that I can do more and better. I actually craved for more after every session!!", added May Lyn. 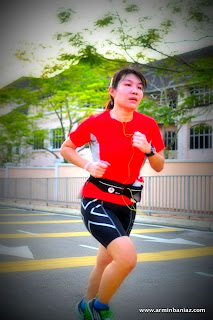 "I also like the weekly Long Slow Distance run organised by COBC which started early this year", said May Lyn smiling from ear to ear.

"For once, I have someone planning a run every week and have a group of people doing it with me. This was what I needed to keep my motivation going. I could always just run by myself but I know for sure, by the 3rd km, I will be running back home but during the LSD, seeing others pushing themselves without even thinking of giving up actually encourages me to keep going. Proud to say that it helps me to train for my first half marathon. Thank you!", said May Lyn sincerely.

"I have to say that I never appreciate my health now better than ever before. With all the exercises, my migraines that I suffered so frequently, seemed to go on permanent leave. I was able to stop eating all the Panadols and Ponstan that became my daily meal, up to a point where I became allergic to them and I learn to eat more healthily. I can see the changes in my body. Now I have friends envying my body instead of the other way round.....perasan!", giggled May Lyn but actually that is true (say Armin)!! 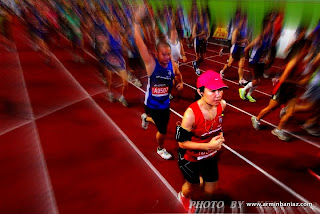 "With my newly found energy, now I enjoyed oil painting, soap making, fly yoga, COBC bootcamps and of course running! From a routine no active lifestyle, in October 2010 I ran my first 5km. Then there was no stopping and I did 7km, 10km, 16.8km and last month, I completed my first half marathon 21km. One day in the very near future I'll do my full marathon!", promised May Lyn!!!

"The best part of attending to all the bootcamp sessions and the running is to indulge in my other hobby which is eating!!! Now I enjoy my food with ease, without regret and without guilt! HOOYAH!" 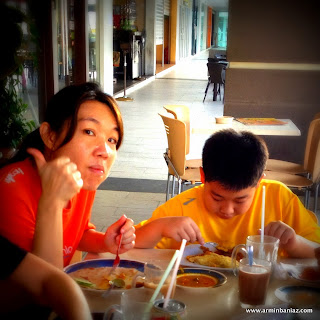 "Lastly, Armin... I would like to put clearly on record, that all of you from the owner, admins and instructors are so down to earth, humble and very approachable. COBC is being run with passion and dedication unlike in RBC where it's very business oriented. I'm proud to be in COBC", said May Lyn full of sincerety and in her glowing smile while hinting... "dont forget me, on the next Musang King Durian Session!!".

May Lyn Wong's platoon commander Staff Sarge (COBC) Dann said the Top-Seal May Lyn is a self-motivated recruit and likeable by many because she always challenge herself for her own improvement that it inspires others. It is not hard to train her and she will be sprinting straight to fifth gear for example, just with a little provocation.

Rose Emini Pahamin was all thumbs straight up at May Lyn's commitment. Unlike how May Lyn saw herself as, Rose Emini Pahamin was all envious at her determination and commitment. "Everytime May Lyn said she could not do anything, she ended up achieving it with pride", uttered Rose Emini in a gist. Rose Emini remembered how May Lyn did not think that she could complete a half marathon but she registered, ran and completed it!! "May Lyn always bitch at how she dislike hills but she conquered it well!! May Lyn's determination and commitment is well respected and I have a strong feeling, she will be aiming her first full 42.2km marathon sooner than later", said the COBC Admin Rose Emini Pahamin.

Sarge (COBC) Nawal whom only had a few encounters with May Lyn said, "May Lyn is one of those fortunate lady whom is born with a lucky charm. She has a good sense of humour and although I have only met her a few times but her friendliness was always welcoming".

Anyone who befriended May Lyn is lucky to have her company and companionship. She is the exact definition of Oxford Dictionary interpretation of Sincere. Her feedback, suggestions and comment is for nothing but only for the betterment.

That is May Lyn, from a concentration span of only 2 months in any activity, she broke her own record with now almost 2 years of consistent training at COBC. That is an achievement that is worth 8 kg of Musang King in a single serving!!! HOOYAH!! 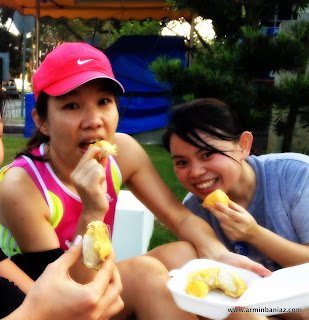