Posted by ARMIN BANIAZ PAHAMIN on January 19, 2011
"Armin, how come my wish was never granted?", asked Banker John Chuah via a BBM message. "Huh... what was your wish list again John Chuah" I asked feeling abit confused. "My wish list is something that 99.9% of everybody at OBC-BU would agree!!!" said John Chuah confidently before adding, "Only Chief, Gunny and Sarge Dann would disagree!! I am voting for Grunts & Mountain Climbers to be banned from ORIGINAL BOOTCAMP!!" I laughed hysterically alone in my private office at home and replied on BBM in disbelief... "What??? You want Grunts & Mountain Climbers to be banned?". John Chuah quickly replied, "Eh you don't write this in your blog or FB ar!"

See.. How can I possibly not pick on John Chuah to blog when he kept cracking me up.. even at 10pm at night!!! I look so retarded, laughing alone in the middle of the night. Worst.. John Chuah then slept soundly and even missed the BOOTCAMP session this morning!!! and we were grunt'ed what he hated the most....... Grunts!!!


Just for your personal information John Chuah,... The more anyone dislike any form of workout, the more it will be prescribed during our session and that was my mistake too when I innocently quoted as my FACEBOOK status update that state..... "there's nothing that I love more than to do LEG workout!!! yiiiiiiiiii breathtaking!! if there are squat pulses and leg workout @ OBC-BU tomorrow, I am so dead... 1 hour down, 30mins to go.... HOOYAH" That being said... we had hEART Quake this morning with 312 reps of total leg workout excluding the Grunts and Burpettes.

In John Chuah's absent, Lizza Abdul Rahim attended the CHIEF ORIGINAL BOOTCAMP for the first time this year (i know its only 19 days in the new year but still!!) after taking almost a month break layparking and holidaying. Both John Chuah and Lizza Abdul Rahim are one of Chief's ORIGINAL BOOTCAMP pioneers and strongest supporters. James Fong and Chan Meng Yam.. almost crowned the FFK King & FFK Queen but lost the title when they both came for workout today.

Today was not just another great workout but it was a DROP  DEAD GORGEOUS  SET CIRCUIT. I mean the circuit was called a Drop Set Circuit. The recruits were divided into 2 team. the first team comprised of the strongest Seals and Delta whilst the second group were the other Seals and Rangers. There were 8 stations located 10 steps apart from one another on a straight line forward. At the first cone, the stronger team, Team 1 had to performed 20 repetitions per workout at each station and the second team performed 18 repetitions at the starting cone. For team 1, the repetitions were reduced from 20 reps at Cone 1, to 18 rep at Cone 2, 16 reps at Cone 3 and so forth. For Team 2, it was also reduced by 2 reps at each cones from the first to the last. In total, for every workout, we did.... err 20+18+16+14+12+10+8+6= 104 reps per workout per set!!!!

Some of the workout, we did 2 sets and that gave it 208 repetitions altogether. Those were... 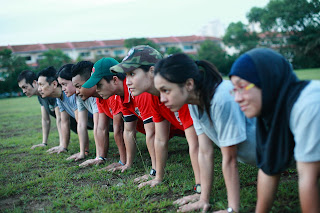 Yesss, you are right!! There were a good orchestra of Ooohs & Aaahs and while I was concentrating to complete the perfect form, the drop dead kiasu James Fong, Joe Liew, Ody Nurfuadi, Kenix Lim happily and smoothly caught up with me. I was the first team with Dr Malek Aziz and they were all way behind us when we first started.


HOOOOOOYAAAH!!!!!
It was so loud, I think we woke up the whole neighbourhood but for a second, I did thought I heard someone said AAAAIIIIYA!! I quickly look around for John Chuah.. Ooops I forgot he overslept. 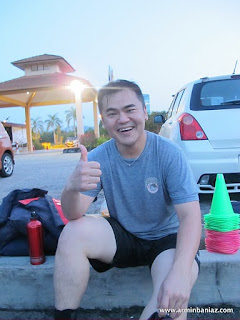