Health: And I thought I was fit...

Health: And I thought I was fit... 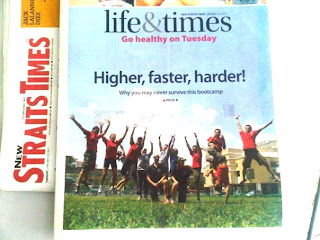 THE NEW STRAITS TIMES, LIFE & TIMES JANUARY 25, 2011
Do you have what it takes for a bootcamp session? Bootcamp virgin SYIDA LIZTA AMIRUL IHSAN only manages to endure 35 minutes of it. IT was the quiet hours of the morning — when the city was still blanketed in darkness and the only sound you heard was your own breathing.

But a group of early risers and fitness fanatics was already up, about and ready to be tortured, trained and toned.

It’s 5.30am and the lights were still out in the neighbourhood but at the Sports Complex in Bandar Utama 3, laughter and conversation could be heard. On that Monday morning, after a 12km run the day before and a good seven hours of sleep, I was there too, giving Original Bootcamp — a high-intensity, thrice-weekly, military-style, 60-minute training — a go.

In recent years, bootcamp has found a following in the city where public spaces have become battlegrounds for people cramming in massive workouts before they head for work.

The same company holds another session in Subang Jaya and amongst other spots in the city and its suburbs. There were about 30 people that day at the camp. Monday blues, I was told. But to those who had woken up at 4.30am, all geared up for a workout, bootcamp must mean a great deal.

I know friends who swear by it but personally, I don’t know if I’m the bootcamp type.

“Go easy on her, Sarge,” a guy muttered to the trainer, Daing Daniel Fitri or Dan, who, upon knowing that I run, promptly put me in the advanced level group. I didn’t disagree. According to my personal trainer, I am fit. I run three to four times a week, a measly sum for a marathoner, but for a civilian, I think I’m fit (operative word being think, because the fact is I’m not fit enough for an advanced-level bootcamp). 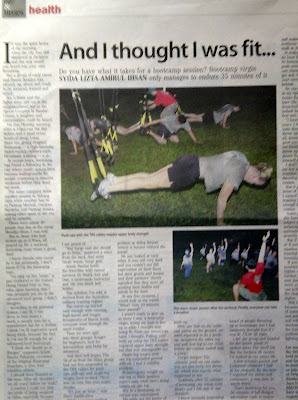 “I think she should go to Ranger,” suggested Armin Baniaz Pahamin, co-owner of the Original Bootcamp franchise, a slim, lean triathlon athlete.

I should have listened to the man. After all, shouldn’t we all crawl before we walk? I confess I could not hide the pride of being assigned to Delta, especially because my fitness level, something I had only cultivated in the past 14 months, is something I am proud of.

“But Sarge said she should go to Delta,” muttered a voice from the back. And what Sarge wants, Sarge gets. Armin Baniaz holds the franchise with cancer survivor Dr Malek Aziz and Dan, a taekwando instructor and 5th Dan black belt holder.

The syllabus, I’m told, is derived from the Australian military training regime.

The warm-up started easy enough with running, high-knees and lunges. Irrespective of fitness levels, everyone went through the same routine.

Then we were split into three groups: Ranger for beginners, Seal for intermediate and Delta for advanced.
And then hell began. The 10 of us from the Delta group had our feet suspended on the TRX cables for push-ups, pull-ups and single-leg lunges, back-to-back. There was no rest. Not even water breaks.

While you were waiting for a free station, you should either be in squat or plank position or doing thrusts (which is burpee without the jump). No one looked at each other. It was still very dark and you couldn’t see full expressions on their faces but their grunts and moans and their partners’ cheers signalled that they were all pushing their bodies and minds to the limit.

At any free moment, I would look as my watch. “What? Only 20 minutes have passed?” I wasn’t ready to give up, so there I was, a bootcamp virgin, trying my best to live up to what I thought was being fit. Push-ups weren’t so hard, I thought. Pulling your body up using the TRX cables required upper body strength but that was manageable too. Single-leg lunges with one leg suspended proved difficult. I had a stability problem.

Balancing my weight on one leg in static position wasn’t easy, what more doing lunges on one leg.

But in a bootcamp, no excuse was entertained.

My pride got the better of me when I had to do what Dan called the ultimate push-up.

With one feet on the cable and palms on the ground, we were expected to do a push-up, straighten the other leg and pull that leg to our chest before the routine ended with a jump.

Forget burpee. The ultimate push-up can make you not just burp, but throw up, which was exactly what happened to me.

Suddenly, after 35 minutes of bootcamp, my vision went blurry and I felt sick in the stomach.

I knew instantly something bad was coming, but I hoped that it wouldn’t. I’d heard of people throwing up at bootcamps, but I had carelessly thought that if I was fit, I’d be all right.

I left the group and headed for the bench about 20 metres away. The stroll felt like the furthest 20 metres I’d walked in my entire life.

A few seconds passed and I emptied whatever I had in my stomach. By the time I regained my vision and composure, it was time to warm down.

That’s bootcamp for you, 60 minutes of full-fledged adrenaline rush. It makes gym workout — with its music and air-conditioning and trainers you can bargain workouts with — look like a walk in the park.

It makes running for an hour feel like sleeping. At bootcamp, you train to push yourself harder. No one consoles you when you get sick. You have to carry your own weight or get left behind.

No one batted an eyelid at my episode. “It happens,” Armin Baniaz told me later. His grey tee-shirt was drenched in sweat, yet he looked fresher than when we first met an hour ago.

“I have done this for two years. I went to Australia to train there recently and I threw up too. Happens to us all, doesn’t matter how fit or good you are. If your body’s not familiar with it, you throw up. But that’s okay. It shows that you have pushed yourself to the limit,” I don’t know if it made me feel better listening to a triathlon athlete tell me that throwing up is part of the routine.

But it gave me a deep sense of dissatisfaction that I missed out a portion of the training because I wasn’t fit enough to go through every routine.

Some people may think this bunch of people crazy to subject themselves to such torturous routines and to surrender themselves to be severely trained.

But if you are an athlete or if you want to build your stamina, nothing beats circuit training and this is a high-intensity version.

If you want to build muscles, run faster, climb higher, cycle longer and swim further, give this a go. You may just find out how much more your body and mind can achieve when you brace the challenge and set the bar higher.

Will I do it again? Perhaps, because while the 35 minutes of training taxed, stretched and pulled every muscle and will in me, the massive workout recharged me for the rest of the day, like an endless supply of electricity lighting up a dark town.