Posted by ARMIN BANIAZ PAHAMIN on January 21, 2011
Its the monthly Bring-A-Friend day again...Bring a friend day is the day recruits bring along their spouse(s), friends, girlfriend(s), boyfriend(s), siblings, family and relatives to have a sneak preview of the 20 years old military inspired group outdoor personal training program. The success of the program lies in the effect derived from tapping via the program, into the body's three energy sources in particular through the ATP, Anaerobic and aerobic to burn fat and increase fitness as well as stamina. Those that had already registered for the Bring-A-Friend Day at HERE, had arrived very early to have a first hand experience and a sneak preview of the ORIGINAL BOOTCAMP.

So lets take a peep into what the 'friends' had on Bring a Friend day. The session start with the customary roll call by Sarge (OBC) Dann. The ROLL CALL is important to mark the attendance for those aiming to ACE their session (ACE = 100% Attendance 100% Commitment 110% Effort). Those that ACE their monthly session is given a certificate to recognise their consistent achievement. Sarge Dann then explain the rules of engagement. The rules are important especially for safety during training and then we started our warming up session. After the warming up session, the platoon was divided into 4 teams, namely Alpha, Bravo, Charlie and Echo with a good mixture of newbies, Ranger, Seal and Delta.

My team went with Corporal (OBC) Tom & Lans Corporal (OBC) (P) Letch.  Corporal (OBC) Tom, had us workout out with rifle for the 'Assault & Fire" movement circuit. This circuit utilizes the acceleration and deceleration momentum technique to run. We were asked to run 10 steps and dropped on one knees and sprint again. The whole rational is similar to driving a car, when we speed without stopping, it uses less fuel but when continuously drive and stop, then drive again and stop etc (similar to being stuck in traffic), we tend to use more fuel. While running, we had various other obstacles after the drop-on-one-knees on every 10 step. 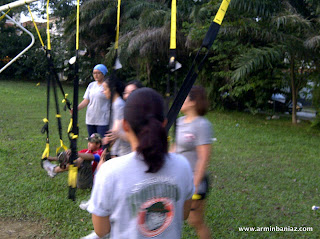 After the circuit with Corporal (OBC) Tom, we went to Sarge (OBC) Dann for a killer core workout with the TRX.

Sarge (OBC) Dann demonstrated the TRX form and technique first before everybody took position to start using the TRX and strengthened the core muscle. 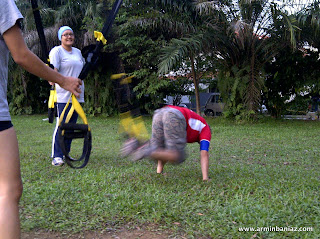 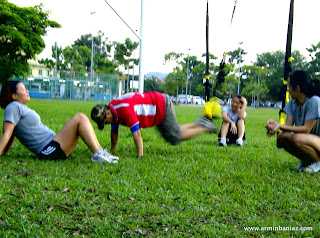 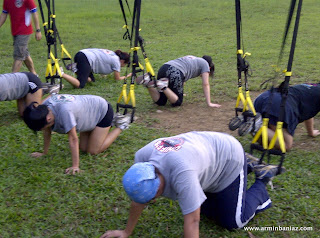 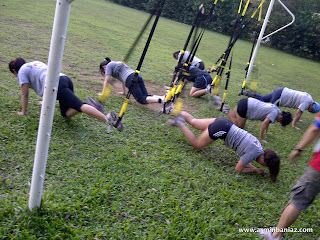 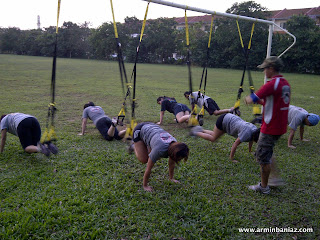 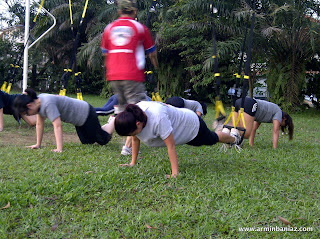 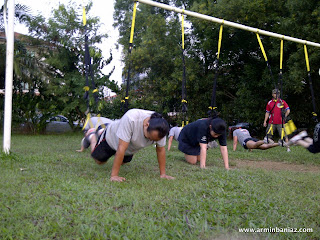 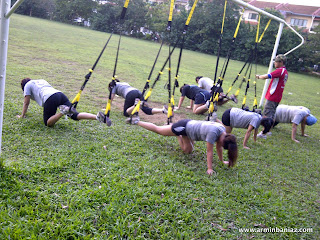 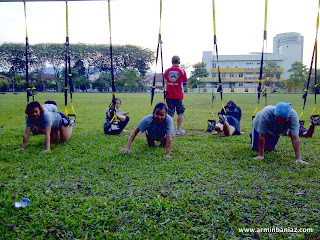 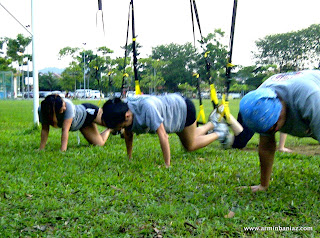 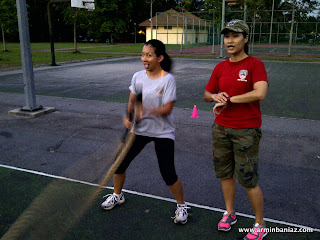 Then we moved on to Corporal (OBC) Nawal for the Battling Ropes. The battling ropes is a very effective interval training method to developed muscular strength, muscular endurance and cardiovascular conditioning. The battling ropes that was invented by multi world record holder strength and endurance athlete, John Brookfield was proven to be an effective method for fat burning and muscle building. 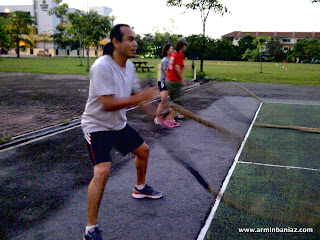 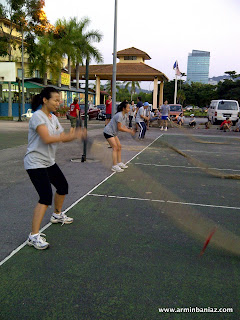 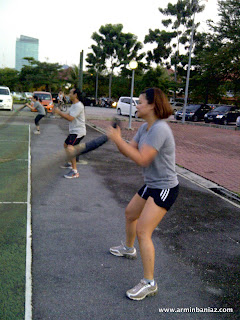 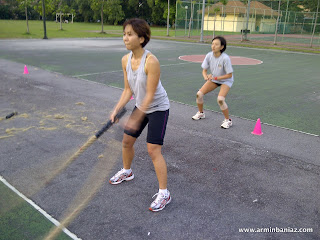 Also present at the BAF was Viki Lim's sister Lizi Lim. Lizi Lim was our Fitness First @ Damansara Uptown and the Curve gym clan more than 5 years ago before we moved on to the Truefitness Gym. Lizi Limhad only given birth 9 months ago and has been resisting the ORIGINAL BOOTCAMP until today. Well Done Viki Lim... finally, we succeeded in bringing Lizi Lim to the bootcamp. 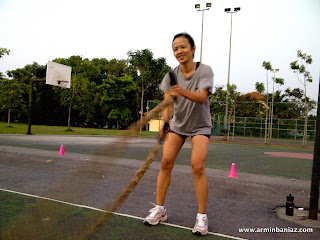 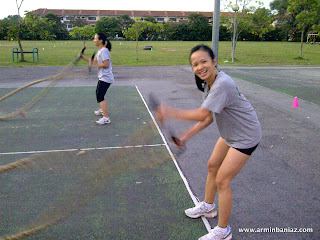 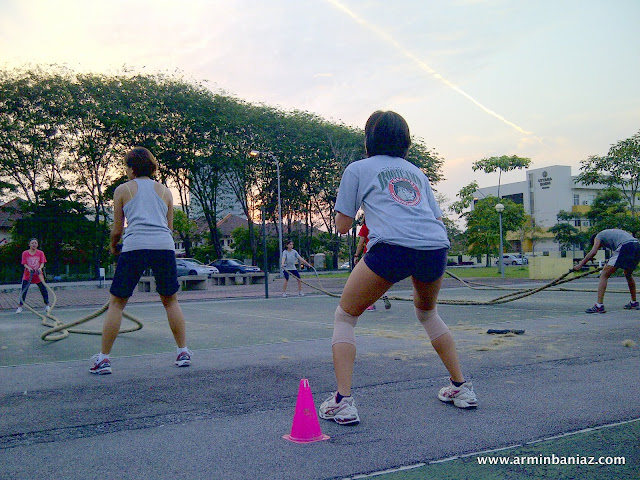 The last circuit was with  Corporal (OBC) Jasper for the tyre flip. Flipping the tyre strengthened the legs and lower back muscle.

The circuit designed for the BRING-A-FRIEND DAY was a total body workout to introduced 'friends' to some of out trade-mark toys. 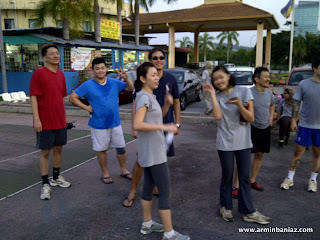 We did not just had a good session working out today but we made friends with a few dozen others. Before we left, kapitan JOHN CHUA, James Fong, SHEAR LING TOH and a few others promised to attend the bootcamp session in Subang Jaya tomorrow to replace some of the session that they missed to ACE in January.