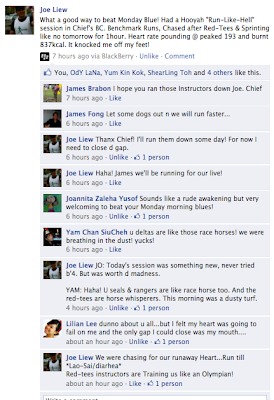 RUN FOREST RUN.......................
run like hell!!!!! was probably the best caption for today's training. The intensity increases multi-fold as we enter the last week of the OBC monthly training session.

Recruits were divided into their respective section, namely the Delta, Seal and Rangers.

We then went to the field and we, the Seals had the tall, macho red Tee Corporal (OBC) Chun!! The Rangers went to the sexy, marathoneress Corporal (OBC) Nawal and the DBK (damn bloody kiasu) Delta went with the most eligible bachelor, cutest (according to himself) Sergeant'est Sarge, Sarge (OBC) Dann. Again, most of the vocabulary used here are made up, so don't bother looking its existence or its meaning in the Dictionary.

The tall unshaven Corporal (OBC) Chun explained what needed to be done which was quite simple for the first circuit. Every SEAL must race and beat its other's speed for four laps of... 200 meter circuit (I think). In poshishen, said the Chun'est Chun in his own slang.. I mean Corporal Chun. Corporal Chun counted down three, two... one, GO!!!!! and we sped like a flying horse......................... okay, there's no such thing as flying horse but it felt like it.

The run started out very good. Rienna Choo, Freda Liu, Shearling Toh, Yam Chan Siu Cheh was extraordinarily fast!! They were sprinting like there is no tomorrow. After completing the first set with 4 laps sprint, we were given 1 minute break before starting the second sets of sprinting. Similarly, we ran tirelessly and completed the 2 sets and given another 1 minute break. Before the 3rd set, Sarge (OBC) Dann transferred me out of the Seal into the Delta with James Fong, Dr Malek Aziz, Corporal (OBC) Tom in grey, Malaysia team Gymnast Hairi Zaid and Lans Corporal (OBC) (P) Letch in grey. Sarge is either jealous of me as the guardians to Seal and threw me into to the DBK group or jealous of me being too long with Corporal (OBC) Chun.. whichever, its bad news to be next to James Fong. We ran endlessly and tirelessly for many many rounds before the running circuit was varied into another running track.

Part of the sprinting requires all the Delta to compete and overtake Sarge Dann whom pace slower than his maximum speed as a minimum benchmark for all Delta's to cruise.  Today was all about sprinting. It was 1 hour of Redline training. There were no exceptions, even the instructors too must sprint faster than all recruits. 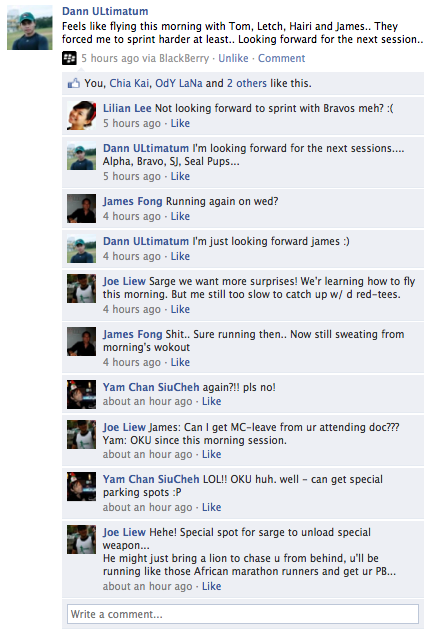 It reiterated the importance of the instructors' fitness. At the Chief's ORIGINAL BOOTCAMP (COBC) @ Bandar Utama & USJ1, instructors are expected to be fitter and stronger than the fastest recruits. That is a pre-requisite for all instructors at the COBC. To further equip our instructors with the best of knowledge, all COBC's at Bandar Utama & USJ1 were sent to attend a Sports Science course for 1 week at the national sports council, Bukit Jalil from today to friday 28 January 2010.

Training and re-training of our instructors have always been a priority at COBC-BU & USJ1 to ensure the deliverables to our recruits are beyond excellent. We are also in negotiation to have the Federation of International Sports, Aerobics and Fitness (FISAF) as a minimum qualification for Chief's ORIGINAL BOOTCAMP instructors. Being an Australian franchise, FISAF is a recognize and accepted certification which ACE is not (in Australia). Whatever the credentials are, the most important element in our selection of instructors are their passion and personal enthusiasm in the program as well as sports.

Until Wednesday for the second last session in January, Stay Tune.....