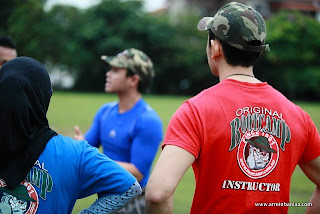 We are now into the 3rd week of January bootcamp session at Bandar Utama. The intensity at the field is increasing and having missed 2 sessions last week due to some oversea traveling for  durian  work, today's session was a killer!!!! Why... Because of two reasons. Reason 1... abit ambitious at the gym yesterday on Sunday doing chest and overall weight workout. The chest was still numb and overall muscle badly aches which was a bad start for today's bootcamp. Reason 2, missing a training session will always break the fitness momentum and reduce strength and fitness level. Reason 3.. these red  devils  trainers have eye at the back of their head and cheating or stalling is abit difficult. Reason 4, its CORP JASPER & CORP CHUN assisting Sarge Dann. These two corporals cant see anyone stalling without prescribing endless grunts... aiiiiyak.

When we arrived at the field, the big circle marked with green cones was so prominent that we thought it was a running merry go-around day. Actually it was John Chuah that thought so..  but I did not mind the running at all. A running or a cardio session is a good alternative to yesterday's muscle tearing workout at the gym but then we were so wrong. It was far from cardio workout, who can anticipate what the training will be at the original bootcamp. A workout here is like a box of chocolate as Forest Gump once said.. 'You dont know what you going to get'!!.  We had the "Long Course Superset" that was aimed to get the best effect from oxygen debt & deficit to boost metabolism rate... whatever that means. 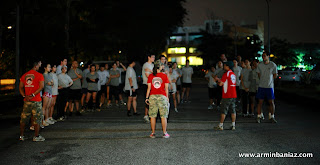 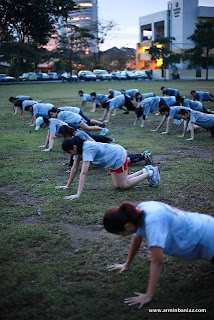 To achieve that, we had four sets of ten minutes per sets of Chest, Legs, Abs and overall muscle at eight stations that made up a big circle. The Delta performed 14 repetitions per workout, seals did 12 and rangers performed 10 repetitions. The first set, we did 14 repetitions of Military pushups before performing 14 reps of T-pushups. After the bench-pressing session at the gym yesterday, the pushups were torturous. Every breast tissue and chest muscle were screaming for break but those pains were happily ignored. We sprinted to the next station after completing 14 reps for both pushups. On the third station, the body could hardly move and so I quietly went on the knees for an easier form. I was not alone.. I could hear an orchestra of Oooohs.. Aaaaahhs. Those moaning were music to my ear!! 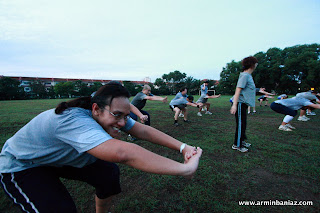 After ten grueling minutes of killer legs, we continued with the abs workout!!! My favourite!!! We did the Getup Situps and ankle taps for the same 14 repetitions each. I was cruising behind Shear Ling Toh before rushing out to cruise behind Delta Jenn Collins that had a perfect form. In the darkness I can hear loud calling for "Armin do not stall!!" Eeek... did I stall? and that attracted the attention of Corporal Chun whom quickly came to pick on me... aiseyman... SHEAR LING@!!!!!!

The circuit ended with a One repetition of thruster to getups workout for 10 minutes. The truster to getups was hard enough to perform after all the previous heart-throbbing workout but what made it harder was when Corporal Jasper insisted that the getups is done without the 'hands' and he make sure its done correctly!!! at almost the cost of my life.. alaa.. okaay abit dramatic but thats how it felt. Things we do to look good and be healthy!! 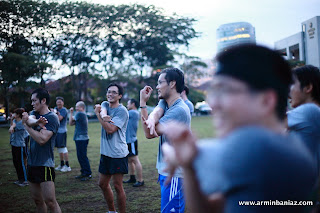 Finally... its over!!! damn time-flies. Corporal Jasper took the warming down session and Sarge Dann ended the session to remind everybody of the BRING-A-FRIEND DAY on FRIDAY (21st Jan) at Bandar Utama and on SATURDAY (22nd Jan) at Subang Jaya USJ1.

If you need to kill a friend.. bring them over!! eh... kidding, if you love your friend and wants them to look good and be as healthy as you, bring them over... register HERE. Its totally free for all on BRING-A-FRIEND DAY.