Posted by ARMIN BANIAZ PAHAMIN on January 11, 2011
"Once a training momentum is broken, starting again is so dreadful" was why a bunch of us Me, Dr Malek Aziz & Shobha Bala started the ACE-PACT at the ORIGINAL BOOTCAMP way back in October 2009. We knew being consistent and discipline was the key towards achieving the best result but it takes quite an effort and willpower to be consistent in training especially when juggling between work, rest and leisure. 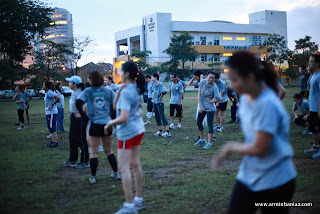 To make sure we all achieve the ACE .. or 100% Attendance, Commitment and Effort, we mutually agree to add on a punishment for those that committed but failed (for whatever reason). and guys that failed, had to wear skirt while training or a fancy dress during grad day and gals that failed... err.. you dont wanna know. It was successful then when most of the recruits were so god damn 'kiasu' and that is the trait that those at OBC-BU possessed! So I wonder if we should throw another challenge to OBC-BU recruits.

Without the same pact, someone called Ady Zahrin had even lost his training shorts and is only planning to buy one to start bootcamping again. I heard rumours John Chuah had jet-lag (from too much break???) and could not get out of bed although is wide awake in the morning. Similarly.... I found it so bleh but forced myself to the training field and has not missed any session yet. All as a consequence from December's 2 weeks break.

The first week was the worst!! The whole muscle was shocked and aching was an understatement but perhaps being masochist does have an added advantage... although aching all around but yessss bring it on!!! (joe liew's favourite word).

The new year started out with an outdoor TRX training!!! yesss, the ORIGINAL BOOTCAMP designed the program with a mixture of everything that maximises all muscle group and especially to avoid bedroom boredom. Just like sex, these new toys will be slowly introduced but surely will peak the orgasm!! 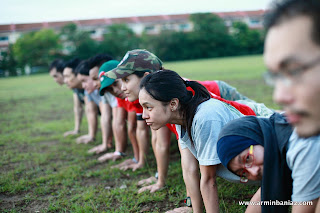 For the newbies, get up close & personal with your instructors & admin at HERE. All the instructors and admin profile will be published there although not fully completed yet.

After a long 'winter' break,  most pioneer recruits are back during the first week although in morning daze and was half awake, I searched and could not find the 'red-shorts' Ryan Wong, the cheerful T'ng Y'ng Tan, the quiet but jolly Yvonne Chen Ling Tze and the ever smiling Lizza Abdul Rahim. There were no sign of Syed Mahadzir Syed Manshor too!! It felt different without these very significant personality at the training ground. It was great to have Patrick Gotham and Jenn Collins back from holiday on the second week. 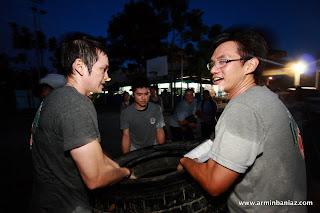 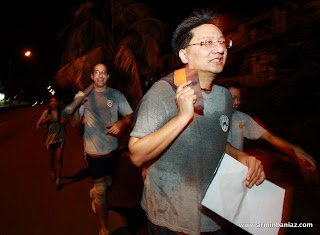 With the new year fever still burning strong, let us recap what a few recruit's new year resolutions are, so we can keep track and make sure they achieve their NY resolution. Top of the list is JOHN CHUAH who aimed to run 2 x 21km half marathons to retire with a bragging rights (evil grin) and to be in Delta latest by end 2011 (Yess, Sarge Dann will make sure of this). Second on list was Freda Liu who should get her naval pierced and sub-10 timing during assessment in 354 days? and Yam Chan SiuCheh just want to 'kangkang' ??? (err extracted from Facebook without permission).