The New look of the Malay Mail

I was invited and attended the re-launching of the oldest english daily newspaper, the Malay Mail yesterday by the Malay Mail's Chief Executive Officer and Editor, Ahiruddin Atan or more popular known as Rocky's Bru.

The new look of the Malay Mail is like a plastic surgery for the old people or maybe a Botox... which may not be necessary but considering the Malay Mail is the oldest in town, a fresher and sexier new look may add to its attraction; especially with a new boss.

Rocky threw a mega party yesterday for the relaunching of the Malay Mail at the Bangsar Shopping Centre that saw Bangsar being over-congested with bumper to bumper traffic. There were lots of food, drinks, singing and loud music. We were also given a red-wrist-band probably as a signal that you've been MMAIL'ed!! It was a stupendous event attended by thousands of supporters.

Unfortunately, I did not bring any camera and my BlackBerry handphone happily went dead! So I searched for Rocky's picture online.. and saw Rocky's picture, a Ramli Sarip look alike from Syed Ali's blog 'OutSyed  the Box'. (Tuan Syed, I hope you dont mind me using Rocky's picture from your blog). 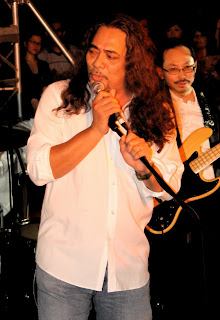 Syed beat the Malay Mail and other blogger by being the earliest to blog about yesterday's party at 11:25pm last night.

Since Rocky joined the Malay Mail, I had renewed my subcription for the paper that had once became a bore. Congratulation Rocky on last night's successful party and for turning around the Malay Mail. Look forward to more exciting (and controversial) news.