Posted by ARMIN BANIAZ PAHAMIN on August 08, 2010
.
UPDATES: Raj Kumar was actually the aide/friend to the main gangster coach PARTHIPAN LETCHMANON. The main gangster coach was Parthipan Letchmanon, a 3rd Dan Taekwondo Coach and Raj Kumar is a 4th Dan Taekwondo Coach. Pursuant to the gangster-act, a meeting amongst all Taewkondo instructors at their Academy was held and the two gangster was given a first warning and a pardon because both of them claim they were provoked. A Coach armed with martial-art knowledge of that nature is similar to a gun-license holder waving his gun when he is being provoke..  acceptable?

Both of them had extend their apology to Dato Ahmad Fadzil and me but it is not as simple as apologizing after a public humiliation. My verdict: their Coaching license should be revoked for at least 6 months! being a Coach especially to children must portray an example akin of any other public figure. 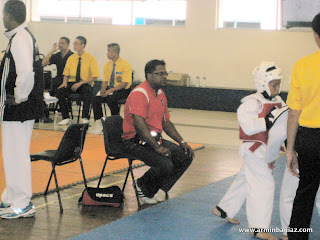 7 August 2010. OCM Indoor Sports Complex, Gewinn 2nd league Dragon Taekwondo Championship 2010. COACH RAJ KUMAR (picture on the left) had portrayed a despicable behavior that is not just unbecoming of a coach but an embarrassment to the reputable Taekwondo institution & its fraternity.

A Coach or an individual that is involved in the training, guiding and directing sports people should portray a good example especially when he himself is a weapon trained in martial art. The way parent was humiliated by the Gangster-Coach should not be repeated (to anybody) especially when they paid and enrolled (the children) having believed in the Taekwondo institution.
Dato Ahmad Fadzil Mohamad, the father to one of the contestant Hadif, was ready to record with a camcorder his son's competition when RAJ KUMAR, his aide and a few other audience blocked his view. Innocently, Dato Fadzil asked if they could either sit or if possible to shift to the other side so that he could have a view to record his son's semi-final competition.

"I'm a COACH", said Raj Kumar arrogantly and rudely chased Dato Fadzil away. I was standing a few feet away and was shocked at the remark!! Raj Kumar then chased and profusely screamed at Dato Fadzil infront of his wife and 4 children. I was dumbstruck, shocked and could not believed to witness such a rude behavior from a Coach.

I stared at Raj Kumar in disbelieved. Raj Kumar saw me staring at him and shouted at me too... which then led to verbal exchanges of shouts. I screamed "KAU NI BIADAP!! KURANG AJAR!!! (YOU ARE RUDE). You can speak politely and there is no need to be rude. Tapi kau buat orang macam bodoh. BIADAP!!!" I screamed in temperament. I too was temperament at the way he humiliated and mistreated Dato Fadzil. If you a coach, you should lead by example...  I said in temperament, Raj Kumar screamed back, "Watch your mouth or I will slap you!!! pointing his finger direct to my face".

A TAEKWONDO INSTRUCTOR, A COACH being arrogant & rude is one thing... but to be wanting to slap parents around and to show such a ridiculous and unbecoming gangsterism infront of children was UNACCEPTABLE.
A COACH SHOULD BE COACHING CHILDREN to behave in the best manner especially when it pertains to martial art which is a weapon. Surely we do not want children to grow up into becoming a hooligan and a gansgter as how Raj Kumar portrays. After a few grass-root check, this is not the first time Raj Kumar had acted in a gangsterism manner. There have been various other complains.

RAJ KUMAR's and his aide's license and permit as a Coach SHOULD BE REVOKED AND CANCELED.

A coach of that manner will produced students of the same species. If there are no action taken, then we should exercise our customer sovereignty and boycott any academy he is attached to.

If there are no action taken on Raj Kumar, we will officially write to the Ministry of Youth and Sports and Ministry of Home Affair to complain. These gangsterism behavior should be eliminated especially within the martial art fraternity.