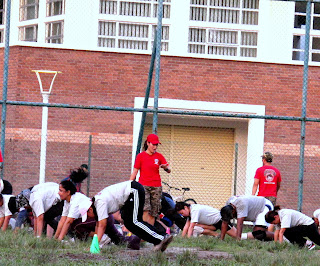 Benchmark assessment!!! Yes.. The first and the 13th session of every month will always be the COBC Benchmark assessment. Whether you are in Malaysia or Australia or any other part of the world, you will be doing the same benchmark assessment!! The same form, the same circuit and the same distance. Why? because of various reason but primarily because wherever you are, when you have reach a certain fitness level, you would want to pace yourself against other better recruits within the COBC network worldwide. That is one of the primary characteristics of a Delta. Twice a year, this elite Delta will be given a special invitation to participate in the network's toughest challenge codename: Hell Week!! Some Deltas were even invited to try out for the Red Tee... Yes, we encourage and recommend potential Deltas to be in red tee for one main reason.. Instructors that was born from a recruit knew best the needs and wants of a recruit and is able to fulfill that better than someone from outside whom would have to first understand COBC military-inspired's firm, assertive and yet friendly nature as well as COBC recruit's culture and camaraderie.

The best Benchmark Assessment record in Malaysia was held for more than a year by James Fong whom recorded both Circuit-1 and 1-mile run below 8 minutes. Since then, there were many recruits whom did chart a better time but it was for either the Circuit-1 or the 1-Mile run but never for both until 13 months later (after James Fong's) in July 2011, Jin Chong Hee became the second recruit that recorded both Circuit-1 and 1-Mile run below 8 minutes with a timing of 7:36 and 7:53 accordingly and held the best record since then. In October 2011, that record was broken by Tan Wee Liam with a Circuit-1 and 1-Mile run timing of 7:16 and 7:23. That timing became the best held record until Tuesday 31 January 2012, when Tan Wee Liam again broke his own record with both timing below 7 minutes at 6:53 and 6:47 in Subang Jaya USJ1. This became a new COBC Best Benchmark Assessment record.

Timing is important for those in Deltas to remain in Delta as they should always improve themselves to be the best and it is equally important for those in Seal to pace themselves well and target to be in the elite group Delta. Only those that wants to be in Delta, would give their best during assessment to be in Delta! Those in Rangers, please remember there were a few of these Delta that started as a ranger themselves but their stamina had improved multifold when they never give up and gave their best effort in every session.

When Jin Chong Hee first did his Benchmark Assessment, his timing was an average 10:06 and 8:34. Seven assessments later, he obtained his Personal Best (PB) with 7:21 and 7:41. Similarly, when COBC most-voted-SOB record-holder Joe Liew first did the Benchmark Assessment, his time was 11:35 and 10:10. Joe Liew's latest timing was 7:55 and 8:01. Remember this year Group's resolution at HERE ?

1 month down, 11 more months to go!! Lets make this year, the most productive year!!