What makes the Chief's Original Bootcamp (COBC) so different? Yes.. the people.. its community!! Since establishment 18 months ago, there are now more than 3,000 registered members. While there are a whole bunch of recruits that have never run and became an avid runners after working out at the COBC, there are also recruits that was a couch potato but became a serious mountain climbers and hikers. This outdoor activities are fast becoming a trend. Another bunch are going to Diving at Mabul, Kapala and Sipadan which are world top 10 best dive spots. Yesterday, a bunch of these recruit attack the Camp 5 Wall Climbing and had the best moment! When you are healthy and fit, you can do anything you want.

I blog this because I fell in love with the pictures above (which reads COBC) that was made from COBC hardcore Sheikh Hisham, Micaela Soyza, Heather Goh, Angela Loo, Avril Chan and Shazni Az.

Just recently, another recruit conquered another mountain, Gunung Kutu!! For more information on the mountain .. click HERE. Umesh Narasimhaiah is  recruit at COBC and an expatriate in Malaysia from India. 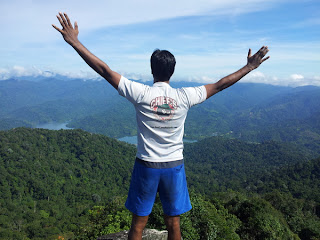 Whatever you want to do, you have the whole battalion.. err community to do it with you and once you are a recruit at COBC, if you ever dream of doing anything.... just join us at HERE.