WHEN DREAM BECAME A LIFESTYLE 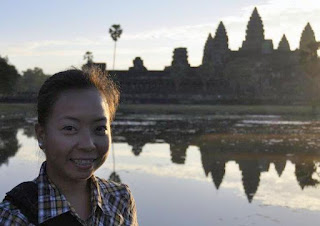 Taj Mahal Aquino born in Mandaluyong, Phillipines is an expatriate in Malaysia attached to the Partnership Management and Market Development department for the Business Process Outsourcing (BPO) side of VADS. Taj Mahal Aquino was head hunted for the job before she even graduated from her Bachelor in Art major in Asian Study at the University Santo Tomas, Phillipines in 2008. Beside being good in her studies, Taj Mahal Acquino had also excelled well as an athlete during her school days having competed and won medals in both local and regional competition for swimming (breast stroke and free style) until she graduated. Swimming was a sport that Taj Mahal had acquired since pre-school when she was only 4 years old.

Taj Mahal Acquino is also the jacks of all trade with other sports having being active and game to sweat out anytime for volleyball, basketball, flag football, badminton, ultimate frisbee or in any other sports and when there is no sports to play, Taj Mahal Aquino would literally climb up walls and trees or just run under the sun being hyper active with excessive energy. Naturally, when Taj Mahal arrived in Malaysia, she quickly became restless in search for some activities and challenges. 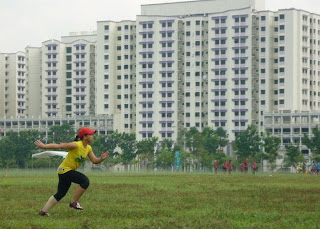 Taj Mahal is an angel with the least sins committed even during her younger days (unlike most of us) and even now. She does not smoke and seldom drinks but had always over-indulged herself with food (but not enough to be categorized as Food-Slut ala Tan Wee Liam)!! Being always over-dosed with excessive energy and her endless sports activities in a day, Taj Mahal never had to worry about her weight and size. She had never did pay any particular attention to good physiques unlike other typical athlete. During her pre-school, Taj Mahal's normal daily dinner includes a Mac Donald's Big Mac and fried chicken with Sundae as side dishes. During teens, her after school meal includes the whole content of a rice cooker with a whole fried chicken and had at least 1 litre of Coca-Cola to flushed it down (err maybe worst than Tan Wee Liam). Taj Mahal Acquino was never thin but being in the swimming team kept her in better shape and that was the reason she was never conscious about her size. 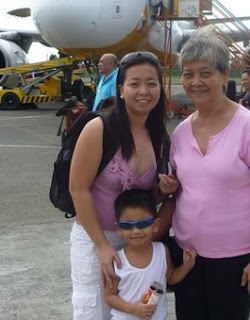 Taj Mahal fitness took a toll when she began prioritizing career and work prior to migrating as an expatriate to Malaysia. In Malaysia, Taj Mahal's sport activities took a further halt during the period of adjustment (to the new job) and living in a foreign land but the athletic in her cried out for a workout. After a moment of lame searching and hunting for an activity, Taj Mahal discovered the Ultimate Club in Kuala Lumpur and without further ado, she immediately attended the sports that she was once a Champion. She was flabbergasted and to her despair, her fitness level had drastically deteriorated. From a Champ, she could not even run for more than 5 minutes... her lifestyle did not help with work becoming more demanding and her fitness continue to disappear.

After 3 years in Malaysia, Taj Mahal incidentally discovered the CHIEF'S ORIGINAL BOOTCAMP. Although she has heard of various fitness bootcamp even in Manila but she never had to enroll herself in any camp having had an active lifestyle. Bearing a fitness program for soldiers, Taj Mahal was convinced this was what she needed to pull herself out from the unfit coach-potato lifestyle that she is now living in. Desperate for a program to push her back into an athlete, Taj Mahal inquired to register for August 2011 intake at Bandar Utama Alpha but the platoon was already full. Bandar Utama location for 5:45am session was the best and the most convenient to the career-minded lady. The next nearest location was at Damansara Heights but for the evening session and with enthusiasm, Taj Mahal went on waiting list for both locations!!!
As the program began on 27 June 2011, COBC Admin Farhanah Bamadhaj spoke and offered Taj Mahal for Damansara Heights intake instead of Bandar Utama but she was more adamant for the morning session. Not giving up, Taj Mahal called and inquired on a daily basis and spoke to COBC Admin Rose Emini Pahamin and COBC Senior Lead instructor Staff Sarge Dann but was disappointed when everyone gave the same reply... "the registration for the platoon is full". Taj Mahal could not wait for the next intake. She must start now, her enthusiasm and eagerness was too strong for her to bear. She pleaded and begged to be accepted. Farhanah Bamadhaj could not resist but she also could not overwrite the system nor can she compromise on registration procedures. COBC operating system is via a realtime management system and when the system is full, it automatically stop further registration unless, there is a cancellation. Farhanah Bamadhaj.. said to Taj Mahal, "The truth is, some people may not show up even though he/she had registered" but Taj Mahal could not understand and continue to plea. Farhanah repeated, "You know Taj, there are people who really never showed up" dropping a strong hint before ending the chat with a slow remark, "Taj, we never had this conversation". Finally, Taj Mahal understood the hint and appeared at BU-Alpha the following day and saw Rose Emini Pahamin happily smiling and accepted her. So did Staff Sarge Dann. "I wanted to jump and hugged all of them", said the Taj Mahal in great happiness. 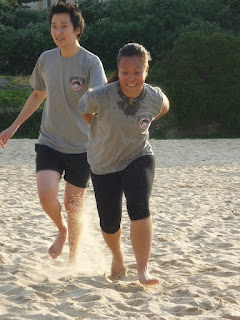 "I have been an avid reader and researcher for health and fitness. What amazed me is that everything that I researched about, I found it in COBC. Workouts are always challenging and never the same. It focuses on overall fitness and not just on looking good. Best of all, it has an awesome support group that is fun and will never let you fail." added one of the most active recruit on Facebook.

The young and ambitious but always cheerful lady further added, "Thinking it was military style, I was actually standing straight, was very quiet and strictly following every single word the instructors were saying the whole time then. I was actually wondering how come John Chuah, Armin and the rest were easily throwing jokes. That explains why I was so quiet then! It wasn’t because I was shy! Hahahaha! Later on, I realized that COBC is actually a lot more fun than I thought! Hahahaha! I am naturally competitive. As much as I am good in motivating myself, I easily get bored. I like being challenged. I think this is what hooked me into staying with COBC."

"As early as the second week, I was starting to feel that I am running faster and jumping higher. Even my teammates noticed. Losing weight was the least of my concerns, but by the end of my second week, I was shocked to find out that I actually lost 20 lbs!!!! I think that was the time I was still extremely afraid to stall! Hahahaha!", said the 29 years old single, available and most cheerful recruit. 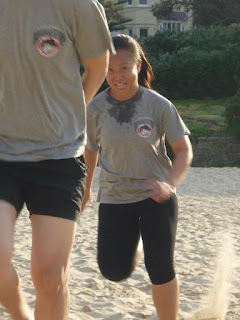 Taj Mahal is one of our many recruits that took advantage of Chief's Original Bootcamp global network and attended the session with my Mentor for Fitness and health Chief Brabon himself at Sydney, Australia. When you are a recruit at the Chief's Original Bootcamp, you belong to a global network. Taj Mahal being very talkative, continued to add, "I was so happy. Just a few weeks back, I couldn't help but notice that my tummy and my arms are changing, so I decided to weigh myself. I was shocked to find out that I actually lost a total of 30 lbs!!"
The born athlete that was never concerned on her physique began appreciating her new firm arm and nicely trimmed tummy. "I have to admit, looking great is not just a bonus...it's an awesome and sexy bonus! Haha! It's been years since I last saw ridges on my tummy and cuts on my arms! It's amazing! Because of that, getting ripped and being a lean-mean machine became a part of my goal!", Taj Mahal continued sharing her joy.

"I'm addicted to COBC. I am now at a stage wherein my day seems to be errr... incomplete if I don't go for a morning session. My mind is so clear after bootcamp. I'm even more hyped up and energetic than usual. Literally, nothing and nobody could ruin my day after a session." said Taj Mahal whom is now back into her true athletic self. 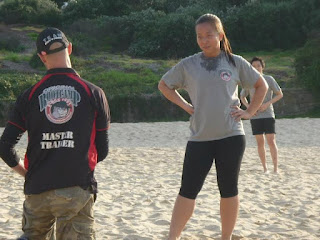 "If not for the healing injury from Ultimate Frisbee, I'd be going everyday again. I just have to make sure I recover fully, before I go kiasu again! I haven't reached my old fitness yet, but because of COBC, it actually makes me smile to think that I can get it back. I do not only know, I actually feel that I am getting it back. When I first joined COBC, I have set myself that I will one day be worthy to wear the red shirt. They (instructors) have always amazed me." confessed Taj Mahal.

"There was one benchmark, in fact that made me sad that I'm still a ranger. Hahaha! But after my injury that forced me to stop for 4 months, I learned that there are things meant to be acquired gradually. Now that I am back…errr... I'm agitated!", claimed Taj Mahal.

"These are just a few of the people in COBC whom have inspired me. I have always dreamt of inspiring and moving people. I want to do the same, regardless at what aspect. But if fitness could be one of those aspects, then that would be great! I really think it's amazing. At this point, I do not know until when I'll be in Malaysia."

Taj Mahal's concluded our conversation by saying, "Before I joined, I have always believed that fitness is an integral part of people's lives. But when I joined, I never thought it would actually be my life. I can’t even imagine myself without it! I could not think of any fitness program out there that could make me feel the same satisfaction I have for COBC.  Truth is, there was a time I was thinking "If I go back to Manila, there's no COBC! Oh no!" But then I told myself "Just enjoy it while it lasts. There's a reason why I became a part of this and met these amazing people in COBC" --  I play the song Lose Yourself by Eminem in my mind =) 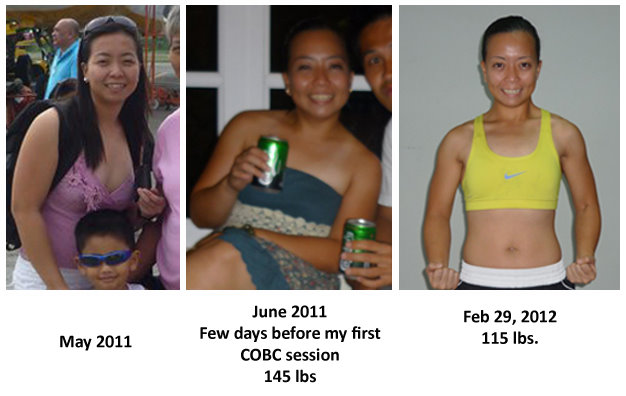 Taj Mahal is already an inspiration to many ladies within the COBC community. Her achievement from where she was, was exemplary. Taj Mahal is a Delta in the making!! Dont give up.. You did a good job with you physique, now its time to get you into Delta!!

Now that she is back into shape, Taj Mahal whom have been without any love relationship since the third quarter 2011, is open for a date hah!! You know where to find her.... COBC!!!