MUCH ADO ABOUT EVERYTHING

First it was the running and seriously, the runner's fraternity within the Chief's Original Bootcamp community is rapidly growing. Tomorrow, a few dozens will be running the Brooks run, then in about a month, a dozen of us will be running the Bali International Marathon which was organised by our Malaysian bank Maybank!!! Naturally, we support our local companies abroad.

Second, bunch by bunch of those within the Chief's Original Bootcamp Community successfully conquered the highest peak in Malaysia, Mount Kinabalu. They are non-stoppable. Third, more and more recruits at the Chief's Original Bootcamp are turning into Divers!! The diving community within our community is also expanding and in April next month, they are going to Mabul/ Sipandan in Sabah.. that was after an orgasmic dive at Puerto Galera in Philippines!!!

Fourth, a new activity within our group would be the Triathlon!!! 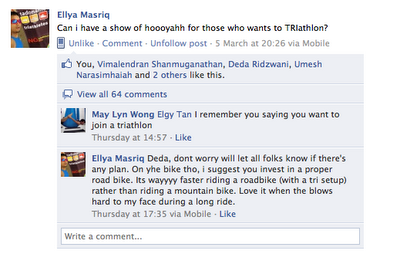 Wowww... thats a lot of takers for Triathlon. When we have the fitness, we want to do anything and everything. The first triathlon target will be the Port Dickson International Triathlon with an olympic distance 1.5km swim, 40km cycle, 10km run on 7/8 July 2012.

While we are going into Triathlon, our buddy Doc Malek is thinking of training for IRONMAN!!! 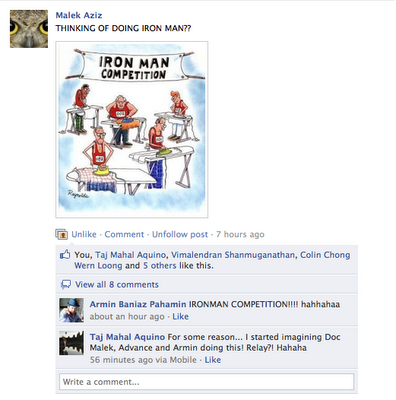 or should I rephrase that as, ironing man competition.. hahahaa