14 July 2010. Welcome back John Chuah, Tricia Fredericks and all those football World Cup followers. The past month has been tough on both recruits and trainers whom suffered from the World Cup Jetlag, staying up late at night with only very few hours of sleep. They were only physically in Malaysia but their thought and mind were in South Africa. 18 recruits were absent on Monday's training session when they did not get sufficient sleep watching the final match between Spain and Holland. Some recruits were Spain and some Holland strong supporters but some simply wanted to see if Paul the Octopus (Sotong) prediction was true. Me...? I just like to eat Sotong.

Paul the Sotong's prediction was right... Spain won!! and so was the prediction that we will suffer if we missed any training session. To welcome back those Missing-in-World-Cup, we had an exhilarating 705 calories burn session this morning with Ropes and killer sprint and run cardio.

We had Sarge Dann, Corporal Sandy and LC Nawal for Alpha and Sarge Dann and Corporal Jasper for Bravo. It felt weird in the morning without James Fong, Yam Chan SiuCheh and Shear Ling Toh. James, Yam and Shearling are all in Sabah for the rainforest concert and up the mountain @ Mulu Caves. They attended the training at the ORIGINAL BOOTCAMP in preparation for this climb.

Bahariah Bahadom, Suriana Saiful, Rose Emini Pahamin, Ilyanna Aylin Ayob, Nyna Mohsen, Nawal Aini Zulkifli and me alongside others are training at the ORIGINAL BOOTCAMP for the Ipoh International Marathon this weekend and Orange BHP run the following weekend.

In anticipation of these events as well as the primary objective of other recruits to lose weight and improve stamina and performances, the circuit today was designed to achieve just that with lots of leg and cardio workout.

We started out with a partner-base workout with rifles and sprint run. I was partnered up with Superstar Leg John Chuah but we were quite quiet being breathless, though I did hear John Chuah's slow whisper trying to motivate me or maybe he was trying to motivate himself. While running, I raced with Corporal Erni Shazwany (whom were in grey, training as a recruit)... and Tricia Fredericks and on the other side, Corporal Jasper (also in grey) had the loudest lung.. maybe he was also training his vocal chords while sprinting but the atmosphere was so intense.

The second circuit was the rope and leg workout. The rope is one of the best cardio alternative to running. We had four types of ropes workout with 4 sets each. The first was the overhand alternating rope, the second type was the underhand power waves, third, overhand sidewinders or what we called the grass cutter, Outward-overhand-cockscrew and finally Inward-overhand-cockscrews. Ryan Wong did extremely well with Ropes especially the cockscrewing.

After the ropes we had 5 sets of 200 meter sprint in a target time of 45 seconds per lap for Delta. Chun Chia Kai was undoubtedly the fastest, Debbie Burgess second and KK Yam third. All other recruits were pacing themselves kiasu-ly. Tricia Fredericks too were amongst the fastest runner. It is good to see the recruits becoming more Kiasu and competitive.

After the heart-busting runs, we had our warming down session and the first 'free' 5 minutes 'form-correction' session. The first, because it will a a default session meant to correct the forms and technique of the recruit. The instructors at the ORIGINAL BOOTCAMP @ Bandar Utama saw many recruits, even senior deltas that could not perform a perfect form and improper technique. Forms and technique are very important especially to avoid injury and to hit the correct muscle group. As such, after every session, there will be One-workout form correction session to ensure all our recruit are aware of the correct form and technique. With 12 sessions per month, we trust the recruit will master at least 12 workout form per month. The form corrected today was the Push-up. This is OBC-BU extra value-added service for the recruits and in line with our commitment for service excellence. 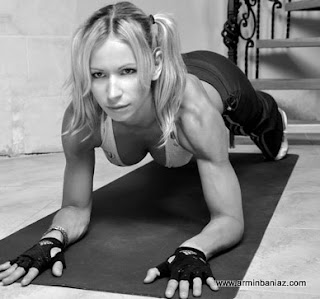 If this is not an exhilarating workout..... I don't know what it is. We had the best session again. The ORIGINAL TAGLINE for the ORIGINAL BOOTCAMP, "If you find it difficult to complete a session, you have had a good workout", we must always give in our best effort and strive harder in every training session to move a step further.

Friday is a BRING-A-FRIEND day session to give a sneak preview and an insight to our family and friends into our new passion in life. Do bring them but first, get them registered online for the free trial at HERE.