28 JULY 2010, a second session is usually a mild introduction session after the benchmark assessment but today... the session felt tougher. Its either, there will be no mercy from start or I was still recovering from the Mt Nuang climb.. i think its the latter.

Having trekked, hiked and climbed up and back down Mt Nuang for 8 hours, we thought we would be stronger but the 1 hour session was damn good that I ended up back in bed and slept for an hour before jumping out into the shower and left for work.

Corporal Sandy took us through the warming up before leading us to the circuit field for a two partner-base-circuits. Sarge Dann assisted and observed Corporal Sandy commanding the Alpha-platoon. All instructors together, trained on alternate days to polished themselves and to be better.

The first of the two circuit entails an overall muscle grinder. The Muscle-Grinder requires the Delta to perform 20 repetitions, Seal 15 repetitions and Rangers 12 repetition of each workout.

I was partnered up with the "Virgin-11km-runner-in-1hr-20-minutes John Chuah". Yam Chan SiuCheh and Shearling Toh are both back after a half month escapade to East Malaysia but James Fong... MC la, not well la, got conference la... la la laa.. (lol, stick-tongue-out) (please go to Zulu for replacement). Dr Malek Aziz was partnered up with Nawal Aini Zulkili and were on my left. Michelle whom branded me as stray cat (actually it was suppose to be stray dog), was partnered up with Freda Liu and stood on my right.

After disappearing for half a month in july session, Yam Chan SiuCheh returned for August session stronger (see picture below) but still came in her torn-pants... 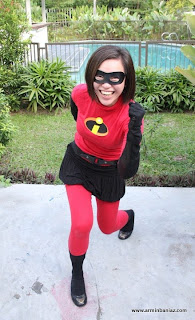 After 24 minutes of Muscle Grinder, we did the Cardio-Grinder with the same repetition. Grunts, military star-jumps, mountain climbers, Seal jacks, Starter Squat jumps, Cross Country, Trusters, Jumping Switch lunges. Performing 20 repetitions of each workout and repeat the cycle again and again for 24 minutes without any break sends all the stored fat straight to the oven.

It was an incredible workout. the Polar read 640 calories burn... after burning 3863 calories up Mt Nuang, the 640 calories was a good addition. 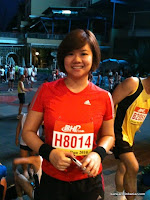 Lilian Lee from bravo is back for August session being possessed by a running-virus. She had registered herself for Perth Chevron Marathon for 12km on 29th August 2010, Newton Run on 26 September 2010, Mizuno Wave Run on 17 October and Penang Bridge International Marathon (21km). Since she started ORIGINAL BOOTCAMP, she had ran once the Standard Chartered KL International Marathon and the  BHP Orange 11km race which she completed in 1 hour & 14 minutes. Many bootcampers gained good stamina & confident to run races.

One of the instructors best orgasm in instructing, is when they saw recruits giving in their best effort while training. The best aspiration was from Harley Davidson babe liza although already trembling while doing the circuit, but she persevered without any break and stoppages. she re-defines the actual meaning of never give up and surrendering to the program. Two thumbs up Liza.

It is great to welcome back BU-Bravo John Ong whom went for an ad-hoc holiday in Canada. We also have a former national gymnast Gold medalist in Commonwealth 1998 at Zulu, Carolyn Au-Yong. Carolyn is the second national Gymnast that trained with us after Hairi Zaid. On behalf of the recruit, we welcome Carolyn Au-Yong and all new recruits as well as Seniors to OBC-BU August session.

Sarge Dann & Corporal Sandy was the instructor at BU-Alpha, Sarge Dann was with LC Nawal for bravo and Sarge Dann again for BU-Zulu. LC Nawal attended double training at Alpha and Zulu while instructing at Bravo. LC Nawal is determined to spartan her training and run-timing. Corporal Chun trained at BU-Alpha.

This month, 20 recruits will be leaving for Mount Kinabalu this weekend to conquer the highest peak in South East Asia.

There are only a few months left before the year-end.. let us end the year with some achievement.