NAWAL AINI ZULKIFLI, a Lance Corporal at the ORIGINAL BOOTCAMP passed her Level 1 military leadership certification by the Global Master trainer Chief Brabon & Gunny Emily in May 2010. Nawal Aini Zulkifli has been a recruit for 6 months prior to being trained as an instructor at the ORIGINAL BOOTCAMP. Nawal Aini Zulkifli had participated in 37 mix races in triathlons, dualthons, marathons and other shorter running distances since she picked up the outdoor activities in 2004.

Nawal Aini Zulkifli is no stranger to sports. She was in school team for Netball, volleyball, badminton, handball and tennis. Nawal Aini is a Bachelor of Arts Honors degree graduate in Fine Arts and had her first taste into outdoor activity when she first climbed up Mount Kinabalu in 2004. 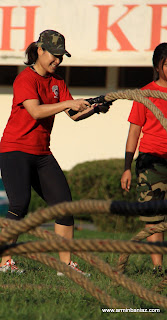 Nawal Aini Zulkifli is scheduled to climbed up Mt Kinabalu for the second time on 1 August 2010. 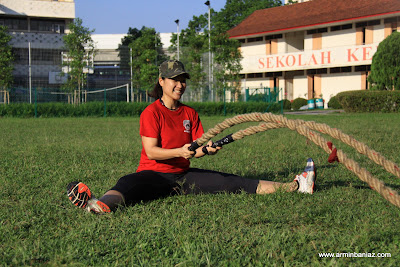 Nawal Aini Zulkifli obtained her Level 1, Sport Science Certificate from the National Sports Council in July 2010 and currently awaiting her promotion to be a Corporal. The ORIGINAL BOOTCAMP instructors ranking can only be accredited by Australia ORIGINAL BOOTCAMP Global Master Trainer Chief Brabon and Gunny Emily. Both Chief Brabon & Gunny Emily travelled around the globe to train and assess all instructors.

A self-motivated person, Nawal Aini Zulkifli's own personal interest and passion in outdoor activities coupled by knowledge gained from the Sports Science Certificate will be of great asset in guiding and motivating recruits towards achieving their respective goal at the ORIGINAL BOOTCAMP.