CHUN CHIA KAI, a corporal with the ORIGINAL BOOTCAMP @ Bandar Utama was a recruit since October 2009 for 8 months before being selected to be trained as an instructor. Chun Chia Kai was a Delta for the whole period as a recruit and held the record for the fastest Benchmark timing at the former KL Alpha platoon.

Chun Chia Kai has never missed any session nor have had any late-comer record during his 8 months as a recruit. Chun Chia Kai is also a senior council member of our 100% ACE (100% Attendance, 100% Commitment and 110% Effort). Chun Chia Kai has lost 8kg while under-training at the ORIGINAL BOOTCAMP. 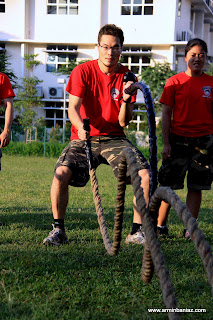 Chun Chia Kai holds a professional degree in ACCA (Association of Certified Chartered Accountant) and a member of Malaysia Institute of Accountant (MIA). Chun Chia Kai is also a double Honors degree graduate in Bachelor of Commerce and Administration in Accountancy. Chun Chia Kai is currently an Audit Manager at an audit firm. Chun Chia Kai had also graduated twice from the Level 1, Military Fitness Leadership Certification from Australia and attended the 17 hours training with Chief Brabon, the Founder and Master Trainer for the ORIGINAL BOOTCAMP worldwide. 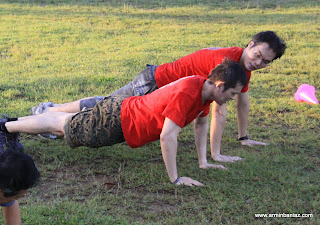 Chun Chia Kai is a good example of a typical white-collar Samaritan whom took the effort to care for his health and lifestyle and yet fulfilled his demanding career as an auditor. 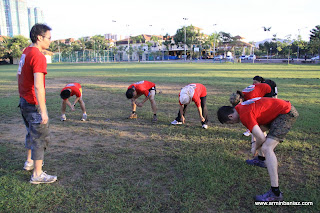 Chun Chia Kai is single and one of the most eligible bachelor at the ORIGINAL BOOTCAMP @ Bandar Utama. He wore Red T'shirt to be a trainer solely for his passion and commitment towards fitness and health. Chun Chia Kai is also a keen swimmer and a cyclist.

On 31 October 2010, in conjunction with his 1st year with the ORIGINAL BOOTCAMP and especially the marathon's 2,500th year, Chun Chia Kai will be running his 8th marathon in Greece, Athen where the Marathon was first originated 2500 years ago and is attempting his first ironman triathlon next year in February 2011.

Chun Chia Kai's passion and commitment is exemplary and ORIGINAL BOOTCAMP @ Bandar Utama is proud to have him on board.
.