Its coming to the end of April bootcamp session. Its amazing how fast time flies. In less than a week, I would have exercised @ the bootcamp, constant and consistently for 7 months.

Although it will be 7 months soon... The sessions at the bootcamp is as intense as ever. The circuit and exercise programs prepared for every session is carefully planned and organised... All I have to do, is to wake-up early, drive and surrender myself to the program. The stamina and physique will slowly and naturally developed.

Having attended 76 bootcamp sessions thusfar..... I am very pleased with all the circuit programs prepared and I am very dependant on Sarge Simran's method of instructing.... Somehow, he can reach out to bring the best out of any recruit.

That passion he had, had influence most of the recruits to strive for the best.

Today was my 76th session and damn I am more motivated and inspired to continue with the program!!!

Today we had SIX AWOLS!!!! The punishment for the 6 AWOLS was EXCELLENT!!!! I mean.... I am not encouraging for more AWOLS but we had the best REMIX punishment workout and I LOVE IT!!!

2) Situp-Getup, performed lying down on the grass (start position), with leg straight on the floor, raise the body with both hand stretch straight up above the head holding the mock rifle until the body is 90 degree, paused and then slowly back down to the ground (One repetition).

3) Rifle upper-raised; Performed while standing. Hold the mock rifle with both armat thigh level. raise it above the head with both hand still stretch straight at all time, lower it to chest level, then back up above the head and lower down to thigh level (One repetition)

4) Rifle shoulder press; Performed while standing. The mock rifle is held touching the chest with both arm bend. Raise and straighten the hand up above the head and lower it back down to chest level (one repetition)

Then we went on to Sarge Simran for a Killer-sprint. We had to sprint 30 meters in less than 6 seconds for a total of 10 sets. We failed twice to sprint in less than 6 seconds and the whole Seals had to performed 10 Grunts. Sarge Simran sprinted together with us. After completing 10 sets of 30 meter sprint @ <6 seconds per set, we had to sprint another 10 sets of 40 meter in less than 7 seconds on every set BUT........ I FFK the second 10 sets and chose the option to do endless GRUNTS instead. I should have ran.... the Grunts too was a killer. 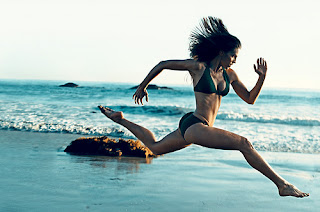 After the killer cardio sprint, we moved to the last circuit with LC Hafiz Omar for a total lower body workout!!! I hate it!! not that I dont want to have a stronger leg but the lower body is my weakest muscle. The advantage of being at the bootcamp is the force majeure.. There is no way anyone can escape any workout!! you just have to surrender and gave you best effort. So... By default, I will soon have a stronger leg (smiling ear to ear).

As if that was not enough to burn our leg....... we did Lunges with both arm still stretch straight up holding sandra.... but this time, our counting had drastically improve.

After the Lunges...... we did the whole cycle again..... and again until its time to warm-down. I burn a total 680 calories but continued with Sandy Roberts, Sarah Stone, Chun Chia Kai SSJ, Azman, Kenix Lim and Leesa Tan a further 15 minutes doing Killer-Abs workout!!! We did Flutter kick, knee to elbow raised and military sit-up on TABATA. We were suppose to end it with  two rounds of running around the rugby field but we had to rush back home.

It was an excellent workout.. In the end, I burn a total 740 calories. Now counting down for Friday session.....