MONDAY, 5 APRIL 2010. KL Alpha welcomes back Senior Sarge Rob Coad from Australia whom arrived in Malaysia on Saturday for a short 4 days visit. Rob last instructed at KL Alpha on 2 December 2009, the only training I've had with Rob since I joined the Bootcamp 7 months ago.

Most of us whom were there in December 2009, remembered the Dancing in the Rain session.. That was the only session with Rob and the only session we had in the rain reiterating the Bootcamp's commitment to train whether Rain, Hail or Shine.

The normal access via parliament was closed for some road works and we had to re-route through Bank Negara Inang Kijai to head for Padang Merbuk. We arrived at 5:38am and I quickly scan through the crowded recruits for Senior Sarge Rob but there was no sign of him.... Maybe Rob had forgotten his promise to me on Facebook!!

Just as Sarge Simran made a role call, Rob appeared out of no where in a very serious look. Sarge Simran is our best instructor and with Senior Sarge Rob in the house.... we can expect nothing less from the session but the best of the best.

Senior Sarge Rob took us for the warm-up and in his deep Aussie accent, he scream.....  Knais Op... change!!.... Hails tu bak... change!! .. which actually means knees up, change... heels to butt, change..... etc......... Everybody was silent without any words spoken, no moans and no sigh... either they were too scared of Senior Sarge Rob or they were trying to make sense out of the deep accent.

Whilst we did the warm-up, Sarge Sim checked for AWOLs..... there were 4 AWOLs.. Dinesh Nagalingam, Anita, Ashimah Thomas and Rachel Oleans..... and 2 LATE-COMERS, Vivien Luyen Ow and Nik Ima.

The platoon was then divided into their respective rank and the Seals went with Sarge Simran & Lans Corporal Elin Klemetsen Fossum, the Delta started with SS Rob and he Rangers with Corporal Faizal Ariff Abdullah. 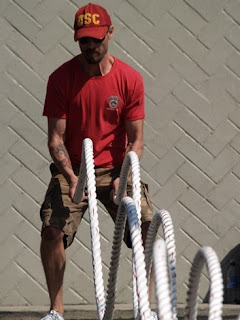 Sarge Simran re-introduced us to the ROPE-BATTLING Circuit because we had to literally battle with the rope!! We last had the BOOM SHAKE SHAKE THE ROPE in January this year.. click HERE but I have to admit, I have a love/hate chemistry with the rope.

There were two ropes that criss-crossed in the middle with 2 rope-end per side. The Seals were divided with 4 recruits per pair of rope and there are 4 ropes in total. One recruit at one end of the rope and the other was at the other end. The two other recruits stood behind each seal-with-the-rope.

The movement with the rope was change to scissor-motion for the second circuit performed to create a side wave when both hand were moved outwards and inwards criss-crossing at the chest level. The arm and chest were burning and almost felt numb. The 'back' recruits, performed a deep squat for 30 seconds before the their turn on the rope. After two sets, the legs were trembling and the arm felt paralyzed.

The third circuit was a killer..... with a burning arm & chest muscle and trembling legs, we now had to create a BLACK-HOLE. The left hand moved on circular clock-wise motion and the right hand on an anti clock-wise circular motion, we had to create two circles ala black-hole... We start seeing all 'black' with stars before the end of the 30 seconds and persevered further when we alternate it with a set of Mountain Climber.

Feeling half dead with Sarge Simran, we went to SENIOR SARGE ROB..... Eeeek..!! Forgot to save some energy for Senior Sarge Rob!!

Senior Sarge Rob made us run 150meter to the end of the field and back to the starting position and while listening to his next instruction, we were not allowed to breath but instead we had to spot-jogging with knee high.

The next circuit was GRUNT JUMP!!!! Grunt jump!!!! It was scarier than it sounded. Grunt was already heart-throbbing.. Grunt-jump was indescribable.... Grunt-jumping performed similar to Grunts but instead of jumping upwards, we had to jump forward. We grunt-jumping for 50 meter and jog back to starting position.

on a push-up position, only one hand was allowed to pick up the sandbag from the next recruit to be passed on to the right recruit.
All the sandbags were then transferred one by one using the left hand passing from one recruit to the other until all the sandbags are back with the last recruit.

We then change position to the military sit-up position but with the leg raised and only the ass was on the ground. The shoulder, back and leg were raised... ala a V-shape. In the V-shape position and contracting the abs muscle, we were asked to transfer all the twenty sandbags one by one from the far left to the last person on the right and back to the left. Time on the V-shape was added when someOne dropped their legs on the ground.

Almost dead with only the 6-pack secretly smiling behind the thin layer of fat, we went to Corporal Faizal Ariff Abdullah. Corporal Faizal aka Corporal TABATA... being famous for the TABATA. We had to do 8 sets of 20 seconds push-up, 10 seconds break and so forth until the end of the session.

The upper body was burning, the chest is now a firm cup C, the 6-pack is smiling from ear to ear and we are totally dead!! I burned a total 660 calories. The highest calories burn since February. My calories burn averages only 500 plus plus in march... I lurrve the session today!!! I did not just burn alot of calories but my muscle still twitches from being overworked.

We gathered at the car park after the session and Senior Sarge Rob came and spoke to us. Very rarely our local OBC instructors approached us after before or after our sessions, unless we approached them first. Senior Sarge Rob akin was a monster being firm and stern while training us but is actually very friendly when he is not training or instructing. We joke, laughed and thank him for instructing us today..

Snr Sarge Rob thank us for welcoming him back to KL Alpha. He remembered our names although we have only met him once. The surrounding was not as dark anymore at 7am.. Snr Sarge Rob had lost a lot of weight since we last saw him last year being leaner, thinner and muscular. Snr Sarge was bulkier and bigger the last time we met him. This had inspired us more to lose those unwanted 'belly' and 'spare-parts'..

Maybe we'll surprise Snr Sarge by being leaner and with better physiques on his next visit.... DOC MALEK AZIZ...... WE HAVE TO ACE THE SPARTAN!!!!!