1 April 2010. Sarge Simran is on Medical Leave.. maybe Annual Leave.... or maybe Emergency Leave.... maybe FFK on today's second session. Along with Sarge, there were 18 others who went AWOL..... and many more absent perhaps with notification. Amongst the many... I am pleased to crown the new FFK-Queen for the year... as Shobha Bala!! Absent for the whole month in March for some unacceptable reason and the whole of April OBC thusfar.. okay ok.. although only 2 sessions but trust me this FFK Queen will be absent in more sessions to come. Along with Shobha, there are 18 other AWOLS.. from my calculation but Corporal Faizal Ariff Abdullah punished us (with pleasure) a punishment for 10 AWOLS.

After the long winded warm-up, and the heart-breaking 50 Grunts, we were divided into our last month rank Delta, Seal and ranger. The new ranking base on Monday's benchmark assessment is still unknown.. probably with Sarge Simran whom was MIA today.

It was raining the whole night but the rain stopped as we were about to start out session. The field was flooded and muddy... almost ankle deep at certain point. We took position in three row separated by different cones. the first row was the Delta, second row the Seal and the last row was for the ranger. I chased Nawal Aini Zulkifli, Kenix Lim and Vivien Luyen Ow back to Delta when they happily downgraded themselves to Seal. Me... happily at Seal with Farhanah Bamadhaj, Leesa Tan, Lisa and Sarah Stone......... I dont know how a red T shirt can be at Seal.

Today was all about TABATA. There are optional workout for those with medical restrictions (such as knee or back problem) but TIREDNESS IS NOT A MEDICAL RESTRICTIONS and the alternative is not an option!!" said Corporal Faizal. We performed Eight sets of the following exercises:

1) Deep Squat. Being at seal standing behind Nawal Aini and all the Deltas, I had the privileged of looking at the Delta's rear and the best deep squat movement was by Kenix Lim. Perfect Squat.

2) KingKong Push-up. Push-up was quite easy but the King Kong Push up was abit scary. I looked back at the Ranger and saw Dinesh Nagalingam giving his best effort without giving up. I was so motivated, I went and did the push-up with him. He did not give-up and we had a hell of a scream. While doing the KK Push Up, I heard a loud scream.. SARAH PUSH UP ON THE TOE..... followed by a whisper from Sarah.. I injured my shoulder you moron. 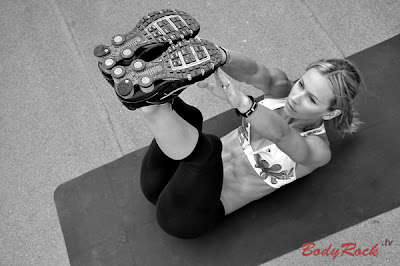 3) Jack Knife abs exercise. My 6-pack abs peep through the layers of fat to say hi after the 8 sets of jack knife... then it went into hiding again!!


It is good to see the old members whom went FFK in March back at the Bootcamp. Welcome back Dr Malek Aziz, Kenix Lim, Leesa Tan, Suloshini Jahanath, Wai-Yee Chan.. etc etc.......

It turned out.. Chun missed the time by a mere 4 minutes and as a result, after the Wednesday's session........ 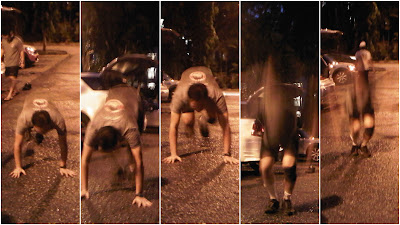 With the 50 Grunts from the AWOL, 40 Grunts for losing the bet and 20 grunts for helping the weaker members.... Chiakie SSJ did more than 100 Grunts on Wednesday. Congratulation Chun.. You are definitely NOT HUMAN!!! but a gentlemen who kept to his word!!