40 years ago, Pahamin Rajab... dad married his puppy love school-mate sweet heart Zainab Mohamad.. mum, after 12 years of courting Mum when she was only 10 years old; Dad was 12 then. They were both schooling at Sekolah Kamil, Pasir Puteh Kelantan when they first met in 1958.  They were both matched-up by classmates for being the fairest students at school. I cant imagine how and what couples of that age do in those days when they were out dating... probably dating by playing 'Guli' or hide & seek. Todate, they have known each other for 52 years and had persevered the worst moment when we almost lost dad in 1991 when he had a heart attack while I was still under hospital observation for Bone marrow transplant. 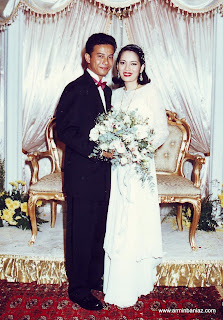 15 years ago, Azhar Sulaiman read out the wedding vow to Chempaka Emalin Pahamin after befriending her for three years when they first met at the launching of the Abang '92 movie at the Putra World Trade Centre (PWTC). Azhar Sulaiman was actively acting then while studying his architecture degree at the University Technology Mara. Chempaka Emalin was then, a law undergraduate at the University of Kent at Canterbury. After the wedding, Azhar Sulaiman then pursued his Architecture postgraduate degree in London and is now a full time architect. 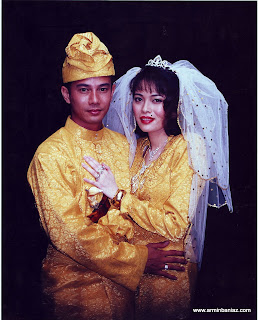 10 years ago, me & Nawal Aini Zulkifli tied up the knot after 4 years of good track record post-love at first sight coincidental meet, at one of my business discussion at the Kuala Lumpur Golf and Country Club (KLGCC). 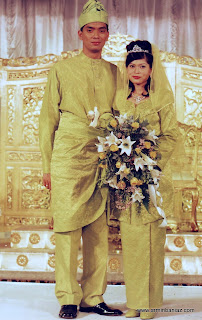 10 years ago, Mohamed Rhiza Ghazi married his university sweet-heart Melor Edina Pahamin after they both graduated from the Aberythswyth University. Melor Edina fell in love with Rhiza Ghazi during her first year university. She pursued her Masters in Law and completed her chamber to practice law before Rhiza proposed.... 5 years of dating before marriage. 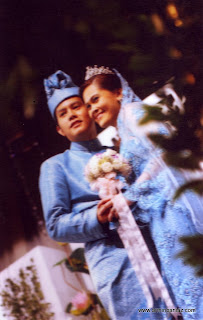 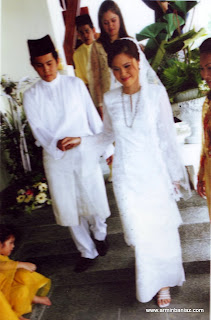 5 years ago, after graduation Dr Teratai Edithy Pahamin became Shazrul Azwa Shaari's wife after 6  years (3 years in long distance relationship) of being together when they were both an undergraduate at the Imperial College, London. Shazrul Azwa was called back to Malaysia being a SHELL scholar upon graduation and Teratai Edithy stayed back in London to complete her specialized medicine postgraduate course.

Amongst the Pahamins, Dad has the best track record marrying his first love and school pre-teenage sweet heart. Melor Edina & Dr Teratai Edithy married their university sweet heart whilst Chempaka Emalin met her soul mate at some movie launching party. Me.... I went through various cycles of test driving in-search for the best and found her in 1996. Although we all went through different style of meeting Mr/Ms Right, but what we all share in common.. is the Anniversary date... all were married on the 23 July!!! except for Melor Edina and Rhiza Ghazi... on the 10 August. They chose the date 10 as per their car registration number instead of the traditional 23 July (me think...?)

On the eve of this special date, we gathered together for family prayer where Dad became the Imam... Guess who was the bilal..? We prayed and Doa that we will continue to be blessed with happiness, joy and err.. others 'secret' wishes. After the prayer, Nawal Aini cooked the best Lamb and chicken briyani for all of us and we dined at my house until late.

"Sedangkan Lidah lagi tergigit..." veteran singer Tan Sri P. Ramlee used to sing... It is true.. no one can deny there are ups and down in life, marriages or even in any relationship but what kept us together... is nothing more than the fond moments and memories that we cherished. It is this journey through thick and thin that made memories a nostalgic moment and through this moment, we grew older, closer and more fond of each other.

The obstacles we faced, the success we share... the tear, cry, smiles and laughter are all ingredients in life-cycle that made an anniversary day even more meaningful and special.

When we first met in 1996, I was driving my first car... the sportiest, damn sexy looking Red Proton Satria 1.3 and I was attached to the Commerce International Merchant Bankers Berhad. Nawal Aini Zulkifli was still a teenager and an undergraduate at the University Technology Mara. In 2000, when I took her hand and oath till death do us apart, I bought her the same Proton Satria as a wedding gift alongside eleven other 'hantaran(s)', took up a Proton dealership and bought a membership at the Kuala Lumpur Golf and Country Club (where we first met). 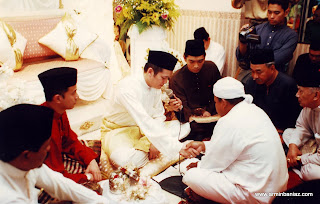 We were engaged in January 2000 and I had exhausted all my money and savings to self-funded the 'Akad-Nikah' ceremony on the 23 July 2000. We left immediately to Sydney for a honeymoon on the Akad Nikah day itself.. being legal... and cannot tahan wor ... and cant 'waste' any single minute having spent alot of money. We held the reception 8 months later with 1,000 guests at the Sheraton Hotel, Subang Jaya in February 2001... Yes, it took that long to save more money and even had to apply for a new credit card to self-financed the reception but 'business' was good, there was a surplus from the reception. It was a pledge I made to myself, that I shall not burden my parent for my wedding. 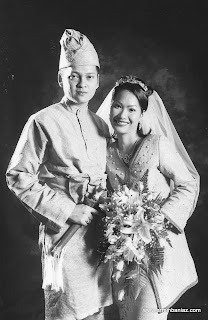 On the first night in Australia, Nawal Aini Zulkifli shred her first tear after dinner... the tear of joy. Since then, occasionally she cried for no reason... especially while watching Hindustani movie.

Being together requires alot of patience and passion. We share interest in almost everything... from singing, running, swimming, mountain climbing, triathlon'ing, EATING, bootcamp'ing, sleeping, cinema'ing, camwhoring, Aaraf'ing but NOT cooking... thats her department.

On the 10th Anniversary today, I pray to ALLAH swt for the endless blessing and for the beautiful, understanding wife and the wonderful parent, siblings and in-laws. May ALLAH swt forgive all their past sins and wrongdoings and bless them with the best of health, happiness and wealth, for they are the best thing that I have in life. Allah Huakbar.


HAPPY ANNIVERSARY
Note: the pictures above are old pictures and may not depicted the actual person. The actual person may look thinner, slimmer or older and broader. The Author does not take any responsibility for any misrepresentation in look.
.