Its the 2nd day without cigarette and everything stink!! The car... home-office... workplace.... all smell of smelly ashtray. Eww.... The smell and scent is the most obvious differences on second day without smoking. Even 'people' smells good.....  Yesterday was my first 24 hours without any cigarette in.... 10 years?

Those that had joined the stop-smoking-bandwagon are Azhar Sulaiman, Joe Liew Yaw Loong, Kamsani Ahmad, Zaiem Razak and Shear Ling Toh. Azhar Sulaiman, an actor, architect and businessman had been smoking for 20 years since he was 19 years old. Kamsani Ahmad, Proton Edar General Manager has been smoking for more than 30 years, Zaiem Razak, a cup cake czar for more than 20 years, Joe Liew Yaw Loong, a fellow comrade at the OBC-BU was married to cigarette for 14 years and Shear Ling Toh whom hopped on the bandwagon today!!! Shear Ling Toh ended her short 5 years affair with Sampoerna. Anyone else joining the bandwagon? Lets do this together!! I hope the social-chimney James Fong & John Chuah too will jump into the bandwagon. 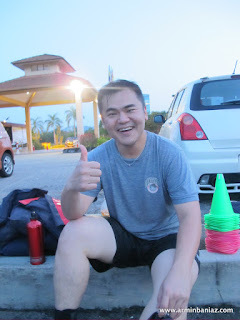 Businessman Joe Liew Yaw Loong, a martial art accessories supplier for the past 30 years (Click Here) has lost more than 10kg in 3 months under the ORIGINAL BOOTCAMP program and did not just stop smoking but is also competing in the 8-Week challenge recently publicized throughout the ORIGINAL BOOTCAMP network worldwide. 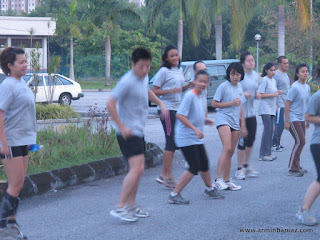 The 11th September session today was all about Legs & Ass (OMG!! Slap my forehead)!! OBC session always gets tougher towards the end but today was a killer. After Corporal Jasper's warming up session, Sarge Dann had us jumping  with joy  with both legs together ala bugs bunny style... 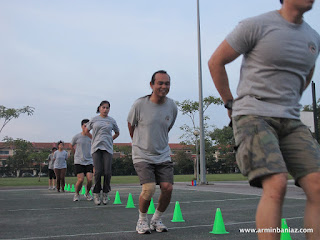 From a small bunny hop.. the intensity was increased with a Standing Broad Jump... ala Kangaroo jump.... We had to jump double the bunny-hop distance with both feet together.

Note: All pictures taken at BU-Bravo platoon.. There were no paparazzi at BU-Alpha.. 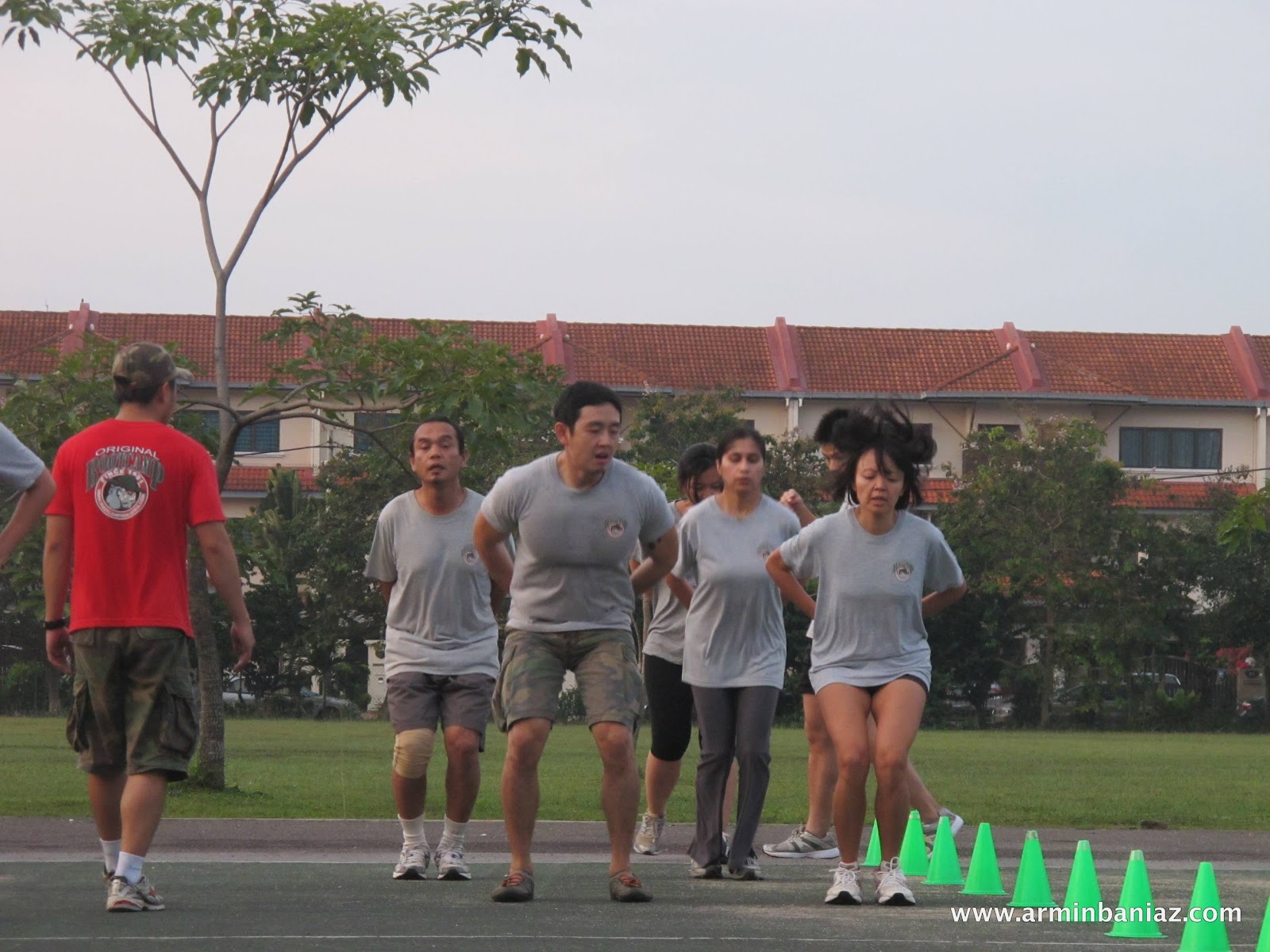 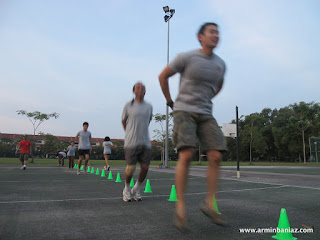 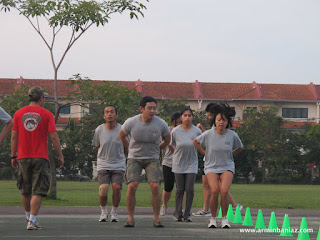 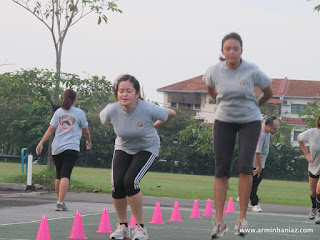 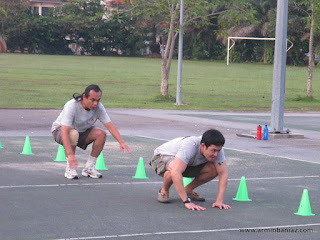 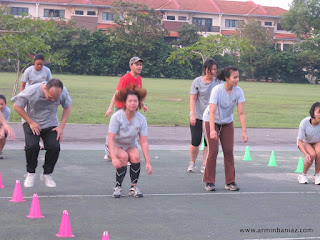 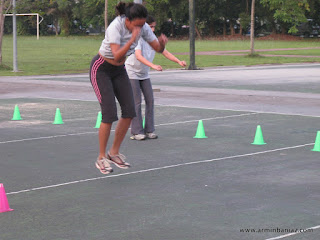 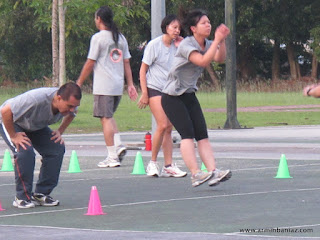 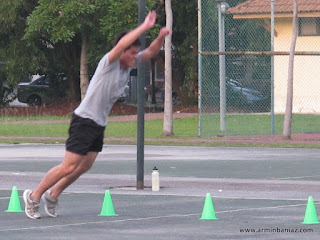 All the jumping was only the start.. and only for a total of 5 minutes to get the heart-beat rising. The real challenge was the next session, the LOWER LIMB GRINDERS with Sandbag!! SAND BAG!!!

The first grinder with sandbag was a non-stop 5 minutes curtsy lunges & Star-Jump.  The curtsy lunges worked the glut to shape up the hip. After the curtsy lunges, we did the stutter squat & Seal Jack for another 5 minutes to further condition the legs before changing to the next grinder. Next, was the 5-Minutes of non-stop 20 rep lunges and 20 mountain climbers... at this juncture..... there were  musical  noisy-cal orchestra of Oohs and Aaahs...

The Oohs & Aaahs orchestra became louder at the last grinders.... the Sumo Squat & Mountain Climbers!! There were a loud Phewww when we completed that last 5 minutes Grinders but another orchestra of Moans was immediately heard when Sarge Dann prompted, that was not the end of session.

The last circuit was a TABATA!!! Eight full sets of 20 seconds SQUAT PULSES with only 10 second break between sets and another Eight full Sets 20 seconds PIKES...... without any break, Sarge Dann instructed the platoon to pace him for a recovery run.

Seriously.... it was impossible to run. The legs were trembling like a jelly and refuse to even move but we still run. Who would dare to disobey instructions and be punished with endless Grunts.....

Friday will be our twelve (12th) and the last session for September intake. Our join-Graduation day for August and September will be held on 25 September 2010. please inquire within at 0173795988 for details. The October session is open for registration and to enrol, click HERE.

Stay Tune for the participants enlisted in the 8-Week Challenge and for the last 12th session blog on Friday.