Posted by ARMIN BANIAZ PAHAMIN on May 17, 2011
The CHIEF'S ORIGINAL BOOTCAMP Malaysia will be 1 year old next month and after 11 months of Benchmark record being held by BU-Delta James Fong whom was also voted 3 times Spirit of Bootcamp (SOB) personality, his record was broken by Nabil Jeffri and Sunny Hussain from USJ1. It was ironic because the month that Nabil Jeffri broke the record, James Fong took an unprecedented 1 month off bootcamp to rest the injury from his maiden 21km running race.

If there is any consolation James Fong, Nabil Jeffri or his full name Muhammad Nabil Jan Al Jeffri is way younger than him and is currently Malaysia high achiever to be our F1 racer. Infact, that was the reason Nabil Jeffri is at the CHIEF'S ORIGINAL BOOTCAMP! ......to be fit for racing!!!

Nabil Jeffri an O+ blood type, a straight As students and is the youngest F1 test driver in the world at the age of 16 years in 2010. Nabil's racing achievement dated way back in 2003 when he won the Most Promising Motor Sports Award for the year 2003- Karting. In the same year, Nabil receive a Certificate of Appreciation for conducting Workshop for Jabatan Belia dan Sukan Selangor. Nabil Jeffri was a Talent for RTM 1 Malaysian Extreme Sports & Malaysian Motor Sports, a special guest for RTM1 LIVE coverage Italian F1 and Ambassador for Hot Wheels Racing.

He stepped up to Formula BMW Pacific in 2010, racing for Eurasia Motorsport. On 1 September 2010, Jeffri carried out an aerodynamic test for the Lotus Racing Formula One team, driving the Lotus T127 on the airfield at the Imperial War Museum Duxford,[2] becoming the youngest ever test driver in Formula One history.[3] He drove for the team as a member of the AirAsia ASEAN Driver Development Program run by Lotus principal Tony Fernandes. This year, Nabil Jeffri will be competing in the re-structured 2011 Formula Pacific (Formally known as Formula BMW Pacific) under the Petronas MOFAZ Racing Team

In 2004 Nabil Jeffri was nominated by Ministry of Youth and Sports Malaysia to represent Malaysia in Asian Kart Open Championship and was nominated for ANUGERAH TUNAS HARAPAN by the Ministry of Education. In 2004, Nabil Jeffri received sposorship from MOFAZ for training and practice, Malaysian Airline for International races and Hot Wheels racing for Rotax Max Challenge Malaysia Series. Nabil also became the Talent for Sukan Dot Com, RTM1. In 2005, Nabil Jeffri attended training and racing at the Factory Driver for Swiss Hutless Asia Pacific in Belgium. Nabil was nominated by the Ministry of Youth and Sports to represent Malaysia in Asia Max Challenge. Nabil also represented Malaysia in RMC World Finals in Langkawi and was the official Driver for PLUS (PLUS Expressway Berhad) in the ROTAX Max Challenge World Finals Langkawi 2005. Year 2005 also saw Nabil Jeffri receiving the Young Achievers Award from TV3 & MILO. 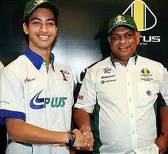 In 2011, Nabil Jeffri still is the instructor for Formula Plus Talent Search Program, participated as PETRONAS driver development program and was made the ICON for Majlis Belia Malaysia and ICON for Sukarelawan Rakan Muda. Since his exposure in racing, Nabil Jeffri had appeared 21 times in both local and international television and 24 times in media publication.

The CHIEF'S ORIGINAL BOOTCAMP, Malaysia will make sure Nabil Jeffri becomes the best of what he can be...... in fitness!