If there is one thing that we learn from the 9th COBC November session today, it must be this one very important aspect that at COBC, we DO NOT leave any team mate behind! and we also witness today a strong display of comradeship.. we see and feel the spirit of bootcamp in almost every recruit. We bring out the leadership in you and we saw how you motivate your own team mate. There is also another thing that we learn today... the platoon will pay with a torturous '50 cents'-draw for every late comers... 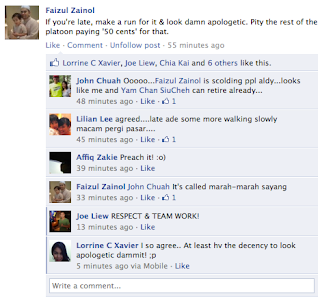 With the rules of engagement being dictated that no team member should be further than 3 steps apart, the workout began!!! The Reds.. with an eye like a Hawk as stated by Afiq zakie, picked and punished team that broke the rule!

The workout today divided the platoon into three sections with a good mixture of Delta, Seals and Rangers into team Alpha, Team Bravo and Charlie. All the gorgeous recruits were I was in Team Alpha with 15 others. We also had pioneer recruit and Otaii Pooi Ching Khiew from BU-B in our team. Also with us today in the other team was Pioneer and Otai recruit Lilian Lee (also from BU-B) whom had just recovered from an injury. Many recruits were taking advantage of the Bootcamp-buffet. What is a bootcamp-buffet? err.. that is a story for the next blog.

Staff Sarge (COBC) (P) Dann was the platoon commander and he was assisted by LC (P) Ody and LC (P) Wan. In a teamwork event that requires a Captain to be chosen by and among the recruit. The captain had to sprint for approximately 200 meter and turnback to pick up one by one of his team mate. Team Alpha nominated none other than one of our candidate to win the 8WC, Faizul Zainol. Faizul ran and came back to rescue LC (P) Ridz whom was in grey (to train with us today). I was the third to be rescued. While we were running, those waiting to be rescued were tortured asked to performed various stationary activity from plank hold, squat hold, table tops to cardio cadence, situp cadence, starjump cadence, pushups cadence, thrusters cadence etc etc....

After 15 rounds of rescuing, we completed the circuit being the first team to arrived. *Standing ovation to Kapitan Faizul Zainol.. clap hand. Team bravo and team charlie were slower when they were stopped a few times for breaking the rule but I think we also won the first set because our Captain had a new shoe!! a NEW VIBRAM. The second set requires the whole team to run on the same mode and on every lap, to drop-off 3 team members and in a good display of team work.. we 'let the other team to win'!! We cant let them be sexier with more grunts and the Champion given less workout .. wink wink.. <-just joking)

What did others had to say about today's workout? Read some of their comments posted on Facebook below..... 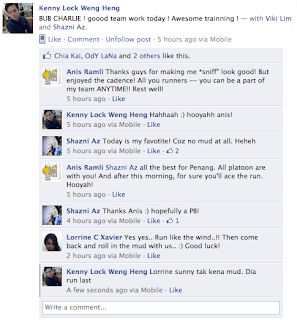 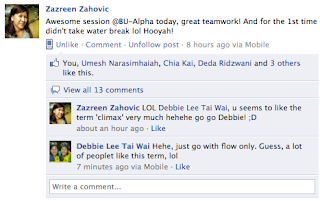 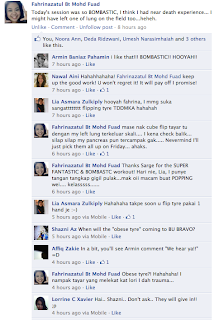 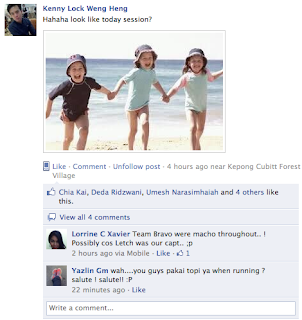 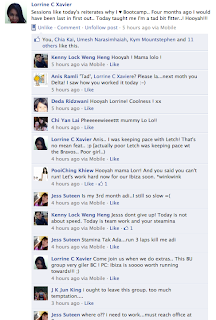 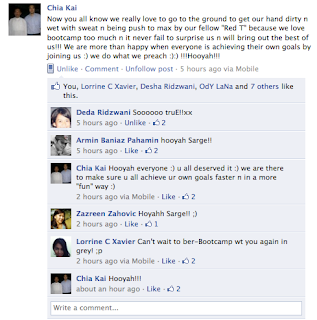 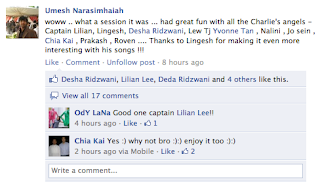 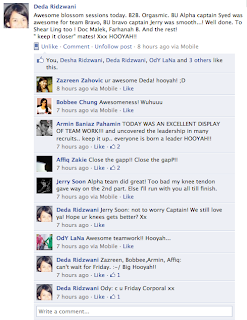 This sunday is the end of 8 Week Challenge 2011. We are organising a photo-shoot and will post the details in due course. Until then.. remember there is only a few days left!! Stay Strong!