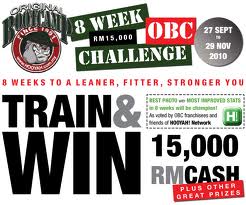 - Current/Existing recruits,
- Former Recruits,
- Family members,
- Friends,
- Instructors,
- Franchisees,
- licensees,
- Admins .
Yes... EVERYBODY CAN VOTE!! and YES – you can vote for yourself. Gunny Emily said, "You would be MAD not too!!!"

Voting is now open for the 2011 ORIGINAL BOOTCAMP™ 8 WEEK CHALLENGE. What is the 8 Week Challenge? Click HERE.

WHAT ARE THE RULES?

Each individual (meaning everybody) is permitted three votes
NOTE: If these three simple rules are not adhered to then all of your votes will be disregarded.

WHEN CAN WE VOTE?

NOW!! NOW!! NOW!!! until 11.59pm Australian EST on Tuesday 22nd November, WEDNESDAY EVENING so cast your votes now, and be sure to tell all your friends.

Let us all vote so that our Malaysian candidates can win against the Australian!!! ... I mean in a friendly manner :-)

WHAT HAPPEN AFTER THE VOTE?


Once all the votes have been collected, COBC will announced by Tomorrow (Thursday, 24 November 2011):

WHO WILL GO TO SEMI-FINALS

By tomorrow (Thu, 24 November), COBC will also announced the Semi-Finalist. There will be 60 Semi-Finalists announced! All Local Champions will go to Semi-Finals and the remaining Semi-finalists will be chosen based on their overall points.

Franchisees & Instructors will be asked to choose their Top 20 Finalists, and to rank them in order of preference.

HOW MANY WILL GO TO FINALS:

20 Challengers will make it through to the Finals. From this list of 20 Finalists our panel of Judges who represent our Sponsors & Supports will choose the Overall Champion and the Overall Runner-up.

WHEN WILL THE RESULTS BE ANNOUNCED?

The Overall Champion and Runner-up will be announced on Friday 25th November.