THE SPIRIT OF BOOTCAMP

Posted by ARMIN BANIAZ PAHAMIN on November 14, 2011
Do you remember those time when we were in high school.. or college or even at university and its that time of the year when we were all so excited to attend the annual dinner and the voting began for the most popular guy/gal whom will soon be crown as the prom king and queen? Well, its that time of the month again at the COBC when although its not the same kind of event but it is almost similar.. Its that time of the month when we recognize that one comrade (per platoon) whom became the reason why waking up in an ungodly hour was so much easier... because he/she motivates you to make real that dream of becoming what you wanted to be.. whether to be healthy, fit, thin, sexy, cross the running finishing line, conquering mountains, get married or for whatever reason. 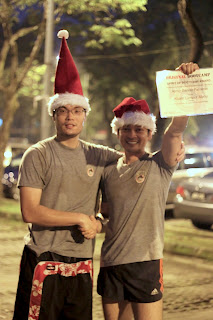 We are pleased to announced, the voting for October and November 2011 SPIRIT OF BOOTCAMP has now begun. To start voting, please click on "Members Only" at www.COBC.biz and select 'Spirit of Bootcamp'. One SOB for one Platoon.... The announcement will be made during the graduation celebration.

Picture on right, once upon a time when Me and Dr Malek Aziz was just a recruit at the Original Bootcamp, we both held the record for the most voted Spirit of Bootcamp award. Most of the months for the whole 12 months before we start the COBC, its always either me or him. We kept that Spirit running with us until today. At COBC, the most outstanding undefeated record is held by Joe Liew whom was voted the Spirit of Bootcamp for FIVE (5) months!

Psst.. my votes for one musang king.. mau ka? Oops.. i cant vote! but I want musang king!