Thats it.... another month of ONE HUNDRED PERCENT ATTENDANCE, COMMITMENT & EFFORT (100% ACE)!!! Six full month of ACE!! I mean........ six consistent month of never missed, never AWOL and never late for the Bootcamp training. Not just me........  alongside with a few other fellow comrades too, in March the ACE-rs are my Sot Sot Jor partner Chun Chia Kai SSJ, Farhanah Bamadhaj, Roslizza Abdul Rahim, Azman Zizal and Tomi Soetjipto and Sandy Roberts.... did I miss anybody?

But the best part is......... on the next celebration, we have Syed Mahadzir Syed Manshor (February Ace-fail), Aisan Lim, Danny Quest & Ana Kassim to be dressed in an outfit chosen by the ACE council.. the ACE council comprised of all the past and current ACE achievers. Click here for the ACE Hall of Fame.

Err.. that reminds me.. I have not updated the February 2010 Hall of ACE.. which I am doing so at this very moment.

We arrived at the Padang Merbuk feeling all charged up perhaps from the thought of completing a whole month full of ACE and was not the least bothered wondering what was in store for our training today. However, the thought quickly changed upon sighting all the tools & toys laid for our training that comprised of big huge ropes, humongous tyres, sandbags, mock rifles.... 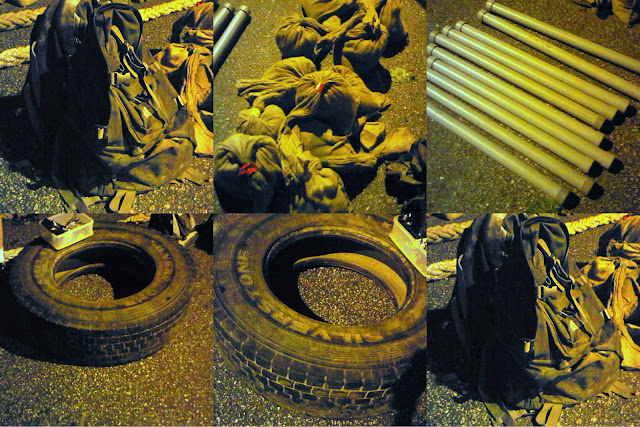 There were 6 AWOLS... we had Amy Ho, Consuela, Danial Ismail, Udo Reinhardt, Nadia Tajuddin and Brenda Buing. For every AWOL, the platoon will pay with 10 grunts per AWOL and the total should be 60 grunts but Sarge Simran gave us a last-session 33.33% discount... we had to do 40 Grunts instead.

Both team Rifle and Guns had to carry 5 Mock Rifles, 5 Sandbags, one huge rope and 3 bagpacks. The race began with the team running together in a group for 30 meters to an uphill route. The team had to compete in speed without leaving any weaker members behind. The loser will have to performed 30 Grunts as punishment.

There were 3 major challenges during the race... The first being the uphill and downhill route which was taxing to the knee as well as heart-throbbing. Second, the run with the tools & toys, and finally, running and supporting the weaker member. With a mixture of Delta, Seal and Ranger, there was a gap between the fittest and the less fit member but the support from everybody ensured the gap was filled.

In an excellent show of team spirit or madness, the crazy delta Chun SSJ took 5 sandbags away from the Rangers and ran carrying all the five Sandbag but towards the finale, the SSJ took the big mother of rope all to himself and sprinted away (it takes at least 5 person to carry and run with the rope)

All the team spirit and support was well worth it when we ended-up with an additional 30 Grunts for reaching the finishing line before the Guns. Just when we thought we were 30 Grunts richer.... Team Guns was given 10 Grunts extra when Danny Quest, one of their team member went MIA (missing in Action).

We ended the March session being 20 Grunts richer and 712 calories burn!!! I hope to see everybody in April!! and I cant wait to start training with Dr Malek Aziz, Nawal Aini Zulkifli, Shobha Bala, Wai Yee Chan, Kenix Lim, Leesa Tan, Suloshini Jahanath..  whom FFK in March but will be back in April.....

HOOOOOOOYAAAAAAAH!!!!
3 days COUNTING DOWN for the BENCHMARK ASSESSMENT on Monday next week...
Stay Tune..