After the warm-up, the platoon was divided into their respective rank the Delta, Seal and Rangers and we went under Sarge Simran, the Rangers went to Corporal Elin and the Delta went with Corporal Faizal.

We had the Leg & Abs Sandbag Grinder with Sarge Simran, a circuit worth dying for. Its an alternate Leg, Abs, Leg, Abs, Legs and Abs for 10 repetition each non-stop for 10 minutes. We learn two new exercises, the Tiger Squat and the Situp-Getups.

We started with a Tiger Squat. The starting position: Standing and both hand stretched straight up above the head holding a sandbag. It requires a deep-squat movement all the way down until the ass touches the ankle, then kneel down (both knee touches the ground) and back to deep squat position (where the ass touches the ankle) and stood back up. The sandbag must always be kept straight up above the head at all time. This movement is 1 repetition.

After the Situp-Getups, we did the Squat Jump, Jack knife, lateral lunges, military sit-up. All with sandbags for a similar repetitions of 10 for each exercise. 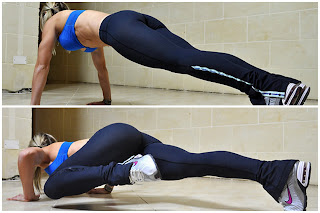 After Sarge Simran, we went to Corporal Elin for the Kamasutra-Rifle Circuit?? or it felt like it with all the kinky movement. We started out with the Dirty Dog Push up. Starting Position: Similar to the traditional push-up except both hand were holding the mock rifle on the ground. As the body is lowered towards the ground, the err 'you-know-what' is thrust to the ground whilst the right leg is raised towards the elbow for a more powerful thrust. The Right Leg was then reversed back to the starting position. The right leg was alternated with the left leg on the next repetition and so forth.

After 6 repetitions of the Dirty Dog Pushup, we Crab-Crawl 5 meter forward to the yellow cone and back to complete a total of 10 meter of Crab-Crawl. 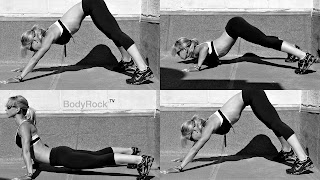 We then bend over with both hand and leg (on toe) on the ground while the ass pointing upwards to have a reverse-V-shape position for the Hindu Pushup. The movement: Lower the head akin of kissing the grass without moving both the hand and leg and slide the head forward and allow the chest and body to touch the ground before tilting the ass back up again to complete 1 repetition of Hindu-Pushup. The Hindu-Pushup is performed for 6 repetition before Bear-Walking for the same distance as the Crab Crawl.

The final circuit with the new Corporal was the Combine Head and Shoulder Press. The Mock-Rifle is held at chest level with both arm stretched straight forward, pulled the mock rifle closed to the chest and push upward with both arm stretched above the head. Then lower it back to chest level and straightened it forward to complete 1 repetition. After performing 6 repetitions, we did the Monkey-Walk for the same distance.

The new Corporal sure does have a funny way of exercising with the Bear, Monkey, Crab... walk and crawl as well as the Dirty Dog.... The crab-walk was the hardest... somehow, the ass kept falling to the ground when it was suppose to be like a table-top 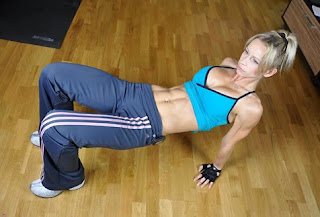 Crab-walk
After the exploitation by Corporal Elin, we went to Corporal Faizal for the 3D Circuit... not 3D lottery but more like Triple-D!! aka... 'Descending Drop-Down' circuit!! This is a bit tricky.... there were four rows of yellow Cones. Each rows was like 5 meters apart. From the first row, we take 6 quick steps forward and dropped chest down with the whole body on the ground...

After dropping dead with Corporal Faizal, we went back to Sarge Simran and repeated the Leg & Abs Sandbag Grinder. We managed to complete one and half full circuit before its time to warm down.

Today session was simply superb!! It was all about form, techniques and movement. Speed was secondary. I could feel all the muscles being exerted, contracted and abused which was imperative for body trimming. I burn 620 calories which was one of the highest in March. This month, my average calories burn was only 500 plus.

It could be due to various reasons... maybe Seal was not strenuous enough or maybe I did not push hard enough but I like Sarge Simran's notion.. As the stamina improves, the heart rate too will improve and when the heart rate is not as high as it was (before the improvement), the calories burn became lesser.. the downside of HR-base calories burn. However, the resting metabolic rate is jacked up for the rest of the day... which means the resting FAT BURN goes up!! 70% of the daily energy expenditure is our resting metabolic rate.. this is where the magic happens!!! in a layman's term....... after the Bootcamp, our body will continue to burn fat!.. and soon........ Phewwwit!!! We became sexier without even realizing it!!!

HOOOOOOOYAAAAAAAH!!!!
P/s, There's a rumour circulating around, someOne is going to be promoted to Sargent!!! ...stay tune!